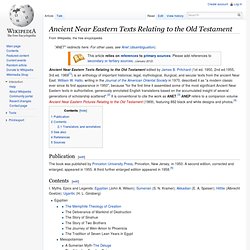 Pritchard (1st ed. 1950, 2nd ed.1955, 3rd ed. 1969[1]) is an anthology of important historical, legal, mythological, liturgical, and secular texts from the ancient Near East. William W. Hallo, writing in the Journal of the American Oriental Society in 1970, described it as "a modern classic ever since its first appearance in 1950", because "for the first time it assembled some of the most significant Ancient Near Eastern texts in authoritative, generously annotated English translations based on the accumulated insight of several generations of scholarship scattered".[2] It is conventional to cite the work as ANET.[3] ANEP refers to a companion volume Ancient Near Eastern Pictures Relating to the Old Testament (1969), featuring 882 black and white designs and photos.[4] Publication[edit] The book was published by Princeton University Press, Princeton, New Jersey, in 1950. Contents[edit] I. II. III. Also: Two Wolves.

The Oldest Written Melody in History c.1400 BC!!! A Nazarene Looks at the Book of Mormon Part 1 - Nazarene Space. By James Scott Trimm. 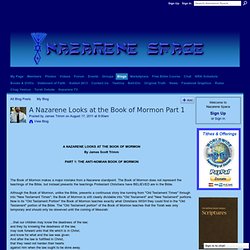 Black Hebrews? The very words cause many people to grin at what appears to be simply a play on words. No one reads about such people in european authored history books and there are only a few references to "Ethiopian Jews" in white Jewish sources. Yet Black Hebrews have existed since biblical times. In fact, they are the original or proto-typical Hebrews. Hebriac studies.

Israelite Heritage. Israelites Came to Ancient Japan. Ark of the covenant of (left) and "Omikoshi" ark of (right) Dear friends in the world, I am a Japanese Christian writer living in . 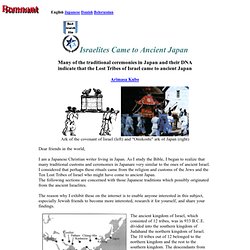 As I study the Bible, I began to realize that many traditional customs and ceremonies in are very similar to the ones of ancient . I considered that perhaps these rituals came from the religion and customs of the Jews and the Ten Lost Tribes of Israel who might have come to ancient . The following sections are concerned with those Japanese traditions which possibly originated from the ancient Israelites. The reason why I exhibit these on the internet is to enable anyone interested in this subject, especially Jewish friends to become more interested, research it for yourself, and share your findings. 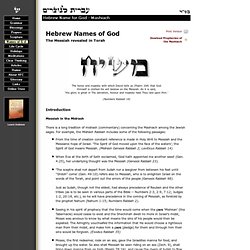 As it is said,'His glory is great in Thy salvation, honour and majesty hast Thou laid upon Him.' (Numbers Rabbah 14) Introduction. YHWHYahuahTransliteration study on the Name of the MessiahSabbathMessianicNatsarimIsraelYahushuaLewWhiteFossilizedCustomsTorahNazareneIsraelPaganChristianityKipa. The Transliteration of the Name What Is the Hebrew Name for JESUS? 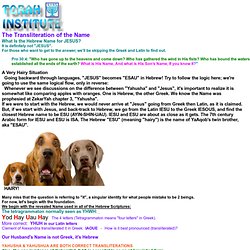 It is definitely not "JESUS". For those who want to get to the answer, we'll be skipping the Greek and Latin to find out. A Very Hairy Situation Going backward through languages, "JESUS" becomes "ESAU" in Hebrew! Try to follow the logic here; we're going to use the same logical flow, only in reverse: Whenever we see discussions on the difference between "Yahusha" and "Jesus", it's important to realize it is somewhat like comparing apples with oranges. 1bread.org. HisLoveisinHisLaw. Spelling the Tetragrammaton: V or W. WWYD? What Would Yahushua Do? Torah of Messiah combats the trinity and anti-law teachings whil.

YHWH is El. The Book of Jasher. Sacred-textsApocrypha Referred to in Joshua and Second Samuel Faithfully Translated. 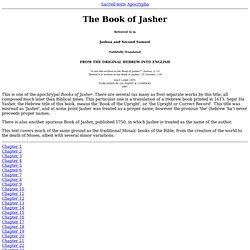 THE NATSARIM DOCUMENTARY. Humanism vs. Christianity. Podcast - Passion for Truth Ministries. Days Of Noah. Antiquities of the Jews. By Flavius Josephus This work was translated by William Whiston and edited by the folks at Sage Software, who offer these works, as well as hundreds of ancient and modern authors, on CD from (I am not associated with Sage Software, but left the plug for their CD in place because it is from their production of the text that my work here is based.) 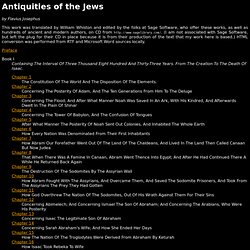