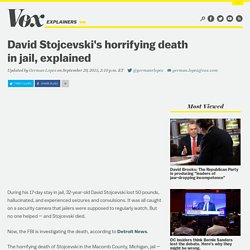 It was all caught on a security camera that jailers were supposed to regularly watch. But no one helped — and Stojcevski died. Now, the FBI is investigating the death, according to Detroit News. Why America's bail system is cruel, in one paragraph. One of the cruelest punishments doled out by our criminal justice system happens before the defendant is even convicted of a crime: bail. 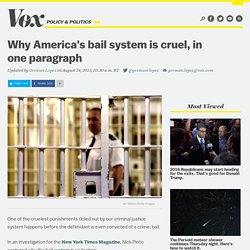 In an investigation for the New York Times Magazine, Nick Pinto captured why the bail system is so broken: [The Bronx Freedom Fund] bailed out nearly 200 [low-income] defendants and generated some illuminating statistics. Ninety-six percent of the fund's clients made it to every one of their court appearances, a return rate higher even than that of people who posted their own bail. More than half of the Freedom Fund's clients, now able to fight their cases outside jail, saw their charges completely dismissed. Not a single client went to jail on the charges for which bail had been posted. Mass incarceration in America, explained in 28 maps and charts. The Death Of Kalief Browder Is An 'American Tragedy Almost Beyond Words'

Kalief Browder, a young man from New York City who had gained national renown in recent years as a symbol of America's broken criminal justice system, took his own life this weekend, according to a report from The New Yorker. 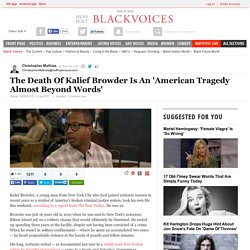 OK, There Are A Lot Of Black Men In Prison. But There’s A Reason For That. This Simple Graphic Shows America's Messed-Up Priorities. The Norwegian prison where inmates are treated like people. The first clue that things are done very differently on Bastoy prison island, which lies a couple of miles off the coast in the Oslo fjord, 46 miles south-east of Norway's capital, comes shortly after I board the prison ferry. 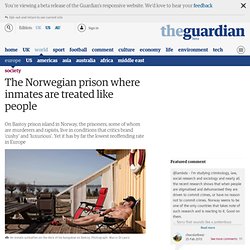 I'm taken aback slightly when the ferry operative who welcomed me aboard just minutes earlier, and with whom I'm exchanging small talk about the weather, suddenly reveals he is a serving prisoner – doing 14 years for drug smuggling. He notes my surprise, smiles, and takes off a thick glove before offering me his hand. Profiting From Human Misery - Chris Hedges' Columns. 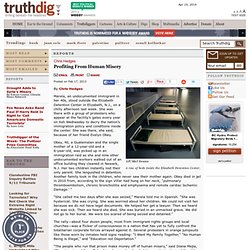 Business is Booming for the Prison Profiteers. Private corrections company The GEO Group celebrated the holiday season by opening a new 1,500 bed prison in Milledgeville, Georgia on December 12th. 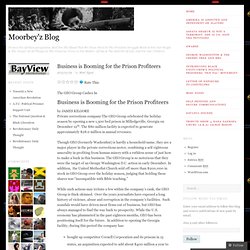 The $80 million facility is expected to generate approximately $28.0 million in annual revenues. Mass Incarceration and Criminal Justice in America. The end of the for-profit prison era? Early this year, the United Methodist Church Board of Pension and Health Benefits voted to withdraw nearly $1 million in stocks from two private prison companies, the GEO Group and Corrections Corporation of America (CCA). 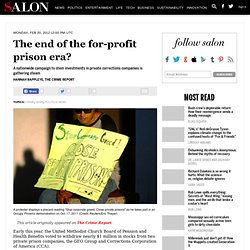 The decision by the largest faith-based pension fund in the United States came in response to concerns expressed last May by the church’s immigration task force and a group of national activists. Prison Lobby “ALEC” Influences Arizona Immigration Law And Worse! Mass Incarceration and Criminal Justice in America. Inside the secret industry of inmate-staffed call centers. By msnbc.com staff and NBC News Inmates at Greene Correctional Institution in Coxsackie, N.Y., staff a state Department of Motor Vehicles call center. 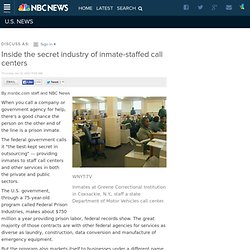 When you call a company or government agency for help, there's a good chance the person on the other end of the line is a prison inmate. The federal government calls it "the best-kept secret in outsourcing" — providing inmates to staff call centers and other services in both the private and public sectors. The U.S. government, through a 75-year-old program called Federal Prison Industries, makes about $750 million a year providing prison labor, federal records show.

The great majority of those contracts are with other federal agencies for services as diverse as laundry, construction, data conversion and manufacture of emergency equipment. But the program also markets itself to businesses under a different name, Unicor, providing commercial market and product-related services. The Justice Department and the U.S. School superintendent to Governor: Please make my school a prison. A school superintendent in Michigan has written a public letter to the editor asking Governor Rick Snyder if his school can become a prison instead. 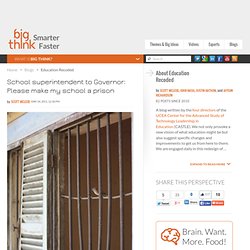 The full text is below. More Black Men Now in Prison System Than Were Enslaved. March 31, 2011 | Like this article? 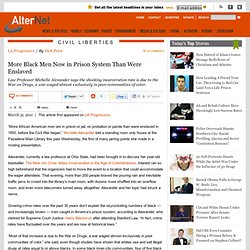 Join our email list: Stay up to date with the latest headlines via email. This article first appeared on LA Progressive. The Largest Prison Strike In American History Goes Ignored By US Media. Dec 16, 2010 Today marks the end of a seven-day strike where tens of thousands of inmates in Georgia refused to work or leave their cells until their demands had been met. The odd thing is, that until today, no one had ever heard about this strike.

Inmates in ten Georgia prisons, Baldwin, Hancock, Hays, Macon, Smith and Telfair State Prisons, to name a few, went on strike last Thursday to protest their treatment and demand their human rights. According to an article by Facing South, Department of Corrections have been nervous about deteriorating conditions in Georgia’s prisons since early 2010. Wardens started triple bunking prisoners in response to budget cuts—squeezing three prisoners into cells intended for one. Poor conditions and substandard medical care are also on the inmates’ list of demands. Prison Economics Help Drive Ariz. Immigration Law. Hide captionGlenn Nichols, city manager of Benson, Ariz., says two men came to the city last year "talking about building a facility to hold women and children that were illegals.