A brief future of citizenship. Williamheath: Here you go @JoelGurin ... The evolving Personal Information Economy. At Ctrl-Shift we constantly monitor the market for personal data and personal data services via weekly newsletters like Market Watch. 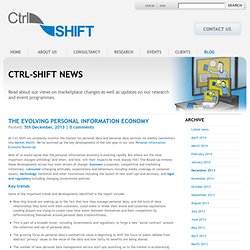 We’ve summed up the key developments of the last year in our new Personal Information Economy Round-Up. Most of us would agree that the personal information economy is evolving rapidly. But where are the most important changes unfolding? And when, and how, will their impacts be most sharply felt? The Round-Up reviews these developments across four main drivers of change: business (corporate, competitive and marketing initiatives), consumer (changing attitudes, expectations and behaviours including media coverage of consumer issues), technology (technical and other innovations including the launch of new start-ups and services), and legal and regulatory including changing Government policies.

Key trends Some of the important trends and developments identified in the report include: Serious strategic intent. Britain's Smart Meter Programme: A Case Study in Privacy by Design by Ian Brown. University of Oxford - Oxford Internet InstituteFebruary 12, 2013 International Review of Law, Computers & Technology, Forthcoming Abstract: Following requirements in the 1996 EU Energy Efficiency Directive, member states are developing programmes to encourage the installation of “smart” power meters that record much larger quantities of data about power usage than traditional meters. 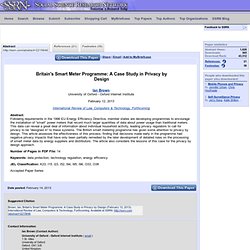 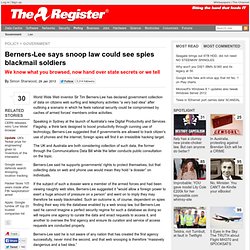 Speaking in Sydney at the launch of Australia's new Digital Productivity and Services Flagship, a think tank designed to boost productivity through cunning use of technology, Berners-Lee suggested that if governments are allowed to track citizen's use of phones and the internet, foreign spies will find it an irresistible hacking target. The UK and Australia are both considering collection of such data, the former through the Communications Data Bill while the latter conducts public consultation on the topic. Law And Technology: PERSONAL DATA PROTECTION ACT 2010: BUSINESS AS USUAL? Professor Abu Bakar Munir Malaysia is the first among the countries in ASEAN to have a law governing the processing of personal information. 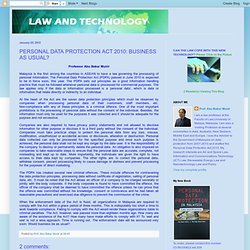 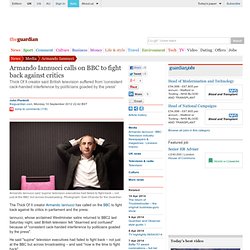 Photograph: Suki Dhanda for the Guardian The Thick Of It creator Armando Iannucci has called on the BBC to fight back against its critics in parliament and the press. Iannucci, whose acclaimed Westminster satire returned to BBC2 last Saturday night, said British television felt "disarmed and confused" because of "consistent cack-handed interference by politicians goaded by the press".

Big Data, Big Dead End / News / What we do. ‘Big Data’ seems well on its way to becoming the next big bandwagon. 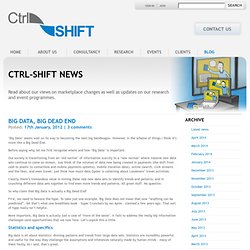 However, in the scheme of things I think it’s more like a Big Dead End. Before saying why, let me first recognise where and how ‘Big Data’ is important. Our society is transitioning from an ‘old normal’ of information scarcity to a ‘new normal’ where massive new data sets continue to come on stream. Just think of the volumes of data now being created in payments (the shift from cash to plastic to contactless and mobile payments systems), mobile (location data), online (search, click streams and the like), and even travel: just think how much data Oyster is collecting about Londoners’ travel activities. Clearly, there’s tremendous value in mining these vast new data sets to identify trends and patterns, and in crunching different data sets together to find even more trends and patterns. Big Data age puts privacy in question as information becomes currency. This month, the US chain Walmart bought the startup Social Calendar, one of the most popular calendar apps on Facebook, which lets users record special events, birthdays and anniversaries. 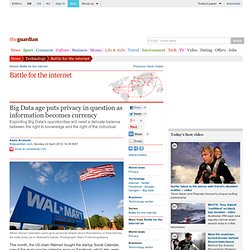 More than 15 million registered users have posted over 110m personal notifications, and users receive email reminders totalling over 10m a month. Smart Guide to 2012: Billion-dollar price of privacy. Read more: "Smart Guide 2012: 10 ideas you'll want to understand" If the rumours are to be believed, our personal data is worth around $100 billion. 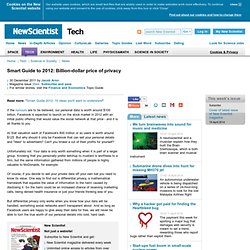 Facebook is expected to launch on the stock market in 2012 with an initial public offering that would value the social network at that price - and it is all thanks to you. At that valuation each of Facebook's 800 million or so users is worth around $125. Exploring value exchange: Can we put a price on data? - Mycustomer.com. Are your customers aware of the value of their data and their role in a value exchange model? 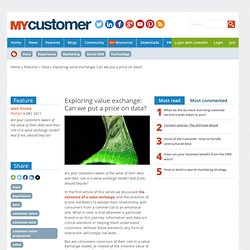 And if not, should they be? In the first article of this series we discussed the existence of a value exchange, and the ambition of brand marketers to elevate their relationship with consumers from a commercial to an emotional one. What is clear is that wherever a particular brand is on this journey; information and data are critical elements in helping them understand customers. Facebook settles privacy complaint with FTC.

Facebook has settled a sweeping privacy complaint in the US after the Federal Trade Commission accused the company of deceiving its users by failing to honour promises to keep their personal information private. 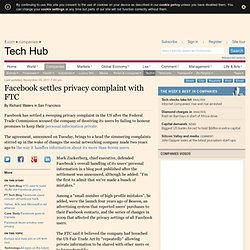 The agreement, announced on Tuesday, brings to a head the simmering complaints stirred up in the wake of changes the social networking company made two years ago to the way it handles information about its more than 800m users. Mark Zuckerberg, chief executive, defended Facebook’s overall handling of its users’ personal information in a blog post published after the settlement was announced, although he added: “I’m the first to admit that we’ve made a bunch ofmistakes.”

Why Your Personal Data Is The New Oil. Remove Personal Information from the Web. About. 13944 - YawnOn Consumer Data Sales Platform Launches. In the US, a new firm called YawnOn has been launched, through which consumers can sell their personal data, information and opinions. The company invites consumers to share their information through completion of an online questionnaire, and the resulting data is then marketed to relevant companies by YawnOn. Consumers who join YawnOn will be offered a choice of levels and compensation. At the most basic level, they simply provide a name, address and e-mail address. At higher levels, they provide information about their buying habits and opinions about specific kinds of products and services. YawnOn will pay its members on a sliding scale, so that the more information a member is willing to provide, the more they will earn.

The firm has been set up by John Rochon Jr, whose background includes experience with financial analysis, mergers and acquisitions, and business operations. Additionally, Rochon has plans for a public offering, which will be announced at a later date. DMA: Data capture suffers as consumers opt for online anonymity. Apple sued over iPad and iPhone app 'data leaks' 29 December 2010Last updated at 11:32 Apple should do more to enforce its privacy policy, say complainants Two groups of iPhone and iPad users are suing Apple saying apps for the gadgets leak personally identifiable data.

FTC 'do not track' proposals. Phil Windley's Technometria. There was a lot of discussion around Personal Data Stores (PDS) and Personal Data Lockers at IIW East. Every time slot on both days had at least one and sometimes two sessions on the subject. (As an aside, if you're not familiar with IIW, the agenda is created in real time, by the participants, not months in advance by a program committee, so it represents more fully the interests of the participants than a normal conference aganda might.) Do A Total Background Check On Yourself.

Life is better ON - Lifeisbetteron. Iosf — Internet of subject. Car-based social networking could revolutionise motor marketing. They're expensive to run, spending much of their time idle, and most people would be better off getting cabs, or using a car club. Justified by the occasions when alternative modes of transport would be inconvenient, a car works out as an expensive indulgence. Yet, our relationship with cars is more complex than that. If reliability and economy were vital, you'd never see an Alfa Romeo on the street. Levi's knows this; after years of talking about the practical benefits of its jeans, putting Nick Kamen in them (or more to the point, getting him out of them) did far more for sales.

It turned out that what people wanted to know from jeans advertising was simple: were they going to get laid in them? However cars are isolation booths - execuboxes for the nose-pickerati to crawl along the A40 in the rush hour.

Related:  Social engineering   -  Privacy   -  privacy   -  Remove Personal Information from the Web   -  Do A Total Background Check On Yourself   -  Education   -  Enterprise