An open-source firmware based on ESP8266 wifi-soc. Obligatory Install Tutorial For RPi and OpenHAB. The first thing you need to do when you get your raspberry pi, is get a case? 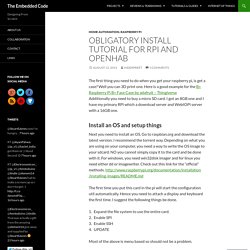 Forget Me Not Design Challenge: [FMN#08] : MQTT... Let me start with asking you a question. 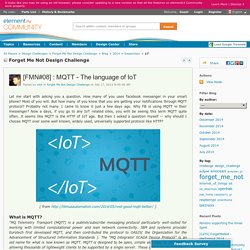 How many of you uses facebook messenger in your smart phone? Most of you will. Installing OpenHAB on a Beaglebone Black. Just a few notes on how i installed the OpenHAB home automation software onto the beaglebone black single board computer. # mkdir /usr/java# cd /usr/java# tar xfvz ejre-7u45-fcs-b15-linux-arm-vfp-sflt-client_headless-26_sep_2013.tgz The bin-folder can be added to the search-path by adding it to the PATH environment variable and i also exported the JAVA_PATH variable: 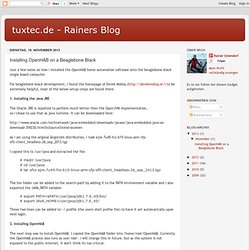 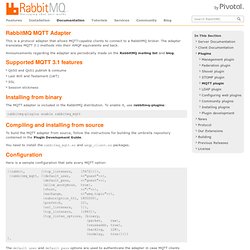 The adapter translates MQTT 3.1 methods into their AMQP equivalents and back. Announcements regarding the adapter are periodically made on the RabbitMQ mailing list and blog. Supported MQTT 3.1 features QoS0 and QoS1 publish & consumeLast Will and Testament (LWT)SSLSession stickiness Installing from binary The MQTT adapter is included in the RabbitMQ distribution. Rabbitmq-plugins enable rabbitmq_mqtt Compiling and installing from source To build the MQTT adapter from source, follow the instructions for building the umbrella repository contained in the Plugin Development Guide.

MQTTitude: a decentralized 'Latitude' with 'MQTT inside' Taking an MQTT server out for a few holes on the code golf course ¶ jra's thoughts. A while ago at work, I needed to learn a little about MQTT. After reading the spec and finding this package that handles reading and writing the messages themselves, I decided to write a server. The result is here: After I finished, I wanted to know if my server was comparable to Mosquitto, so I wrote some load testing tools.

I found that my Go server was generally comparable to Mosquitto, in that it had the same order of magnitude for transaction rate and latency (but it was strictly slower than Mosquitto; there is a cost to pay for the benefits Go gives you). As usual, Go programs compare quite favorably to C programs in terms of memory safety, overall length, and readability. Then I mentioned to my coworker Atila what I’d done. And so the code golf began. If I still have your attention… Here are some interesting things from the experience and the code I wanted to point out.

Go vs D vs Erlang vs C in real life: MQTT broker implementation shootout. At work we recently started using the MQTT protocol, which uses a publish / subscribe model. 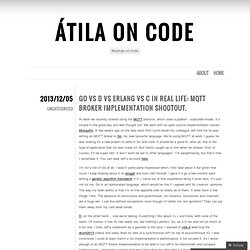 It’s simple in the good way and well thought out. RabbitMQ - Messaging that just works. CloudMQTT - A globally distributed MQTT broker. Mosquitto_pub - an mqtt version 3.1 client for publishing simple. A Simple Example (Arduino, MQTT, m2m.io) This post shows a quick example of using MQTT and the m2m.io platform with an Arduino device. 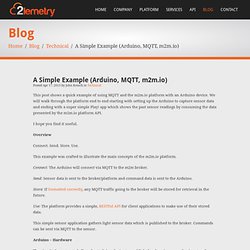 We will walk through the platform end to end starting with setting up the Arduino to capture sensor data and ending with a super simple Play! App which shows the past sensor readings by consuming the data presented by the m2m.io platform API. I hope you find it useful. Overview. Network Button Example · mcollina/qest Wiki. QEST - The Internet of Things broker that loves devices and developers. Using Sockets. Sockets and WebSockets provide full-duplex communications channels over a single TCP connection. 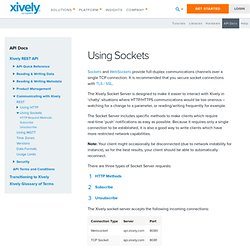 It is recommended that you secure socket connections with TLS / SSL. The Xively Socket Server is designed to make it easier to interact with Xively in ‘chatty’ situations where HTTP/HTTPS communications would be too onerous – watching for a change to a parameter, or reading/writing frequently for example. The Socket Server includes specific methods to make clients which require real-time ‘push’ notifications as easy as possible. MQTT-HTTP Bridge - Google disks. HTTP to MQTT Bridge for m2m.eclipse.org. Internet enabled interactive stair lights. Ok, So this has been done before, i know. 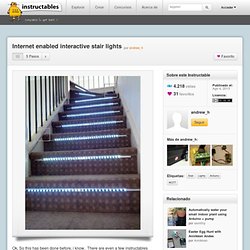 There are even a few instructables already on how to make stair lights. Mine are a bit different. You see, I'm starting off on a 'Home Automation spree' and this is one of the elements in my house. This enables web/network based control over the stairs. All you need to do is 'publish' the settings and the Arduino will act accordingly. The basic technology being used here is an Ethernet enabled Arduino and the MQTT protocol.

Grab an MQTT 'Broker' in your favorite OS platform - Mine is my router which runs linux so I am running Mosquitto but there are brokers for windows and Macs too - It really needs to be something that's on all the time so you could even use a Raspberry Pi or similar low power device. The project could be modified to remove the MQTT stuff from it and it could be controlled with serial comms or buttons but I'll leave that to you if that's what you want. My development environment is currently Arduino IDE 1.0.2. A new OSS PHP MQTT Client Library – phpMQTT. 10 Sep 2010 It seems finally we may be freed from the unstable shakiness which is embodied in PHP_SAM - the only PHP based MQTT client....until now. 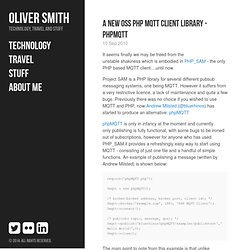 Project SAM is a PHP library for several different pubsub messaging systems, one being MQTT. However it suffers from a very restrictive licence, a lack of maintenance and quite a few bugs. Previously there was no choice if you wished to use MQTT and PHP, now Andrew Milsted (@bluerhinos) has started to produce an alternative: phpMQTT phpMQTT is only in infancy at the moment and currently only publishing is fully functional, with some bugs to be ironed out of subscriptions, however for anyone who has used PHP_SAM it provides a refreshingly easy way to start using MQTT - consisting of just one file and a handful of simple functions.

Another word for snow. Background Over the last few weeks I’ve been experimenting with the Dallas 1-wire system for sensors around the house/garden. 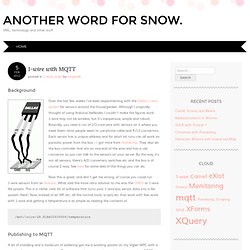 Although I originally thought of using Arduino/JeeNodes I couldn’t make the figures work. 1-wire may not be wireless, but it’s inexpensive, simple and robust. Basically, you need a run of 2/3-core wire with sensors on it where you need them: most people seem to use phone cable and RJ12 connectors. Each sensor has a unique address and for short’ish runs can all work on parasitic power from the bus – I got mine from HomeChip. They also do the bus controller that sits on one-end of the wire and has a usb connector so you can talk to the sensors on your server. Now this is great, and don’t get me wrong, of course you could run 1-wire sensors from an Arduino. Sigfox : One network, A billion dreams.