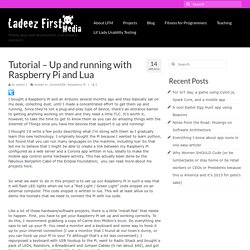 Since they’re not a plug-and-play type of device, there’s an entrance barrier to getting anything working on them and they need a little TLC. It’s worth it, however, to take the time to get to know them as you can do amazing things with the Internet of Things once you have the devices that support it up and running! I thought I’d write a few posts describing what I’m doing with them as I gradually learn this new technology. I originally bought the Pi because I wanted to learn python, but found that you can run many languages on the machine, including lua! So that led me to believe that I might be able to create a link between my Raspberry Pi configured as a web server and a Corona app written in lua, ideally to make the mobile app control some hardware activity. Now, configure some hardware. Taken from RasPi.tv. 1. Home Automation Using ESP8266. This eBook is my step-by-step guide designed to help you get started with this amazing $4 WiFi module called ESP8266. 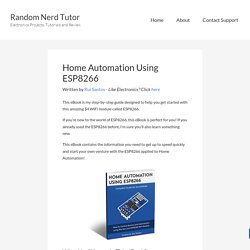 If you’re new to the world of ESP8266, this eBook is perfect for you! If you already used the ESP8266 before, I’m sure you’ll also learn something new. This eBook contains the information you need to get up to speed quickly and start your own venture with the ESP8266 applied to Home Automation! What You’ll Learn In This eBook? Here are a few of the things that this eBook covers (keep reading this page for more details): Technical specifications of your ESP8266Where to buy the ESP8266How to establish a serial communication with your ESP8266What’s NodeMCUHow to flash and install a new firmwareHow to install ESPlorer and how it worksHow to blink an LED with NodeMCULua programming languageHow to interact with the ESP8266 GPIOsHow to create a web serverHow to send emails with your ESP8266How to create an email notifier with a PIR Motion SensorAnd a lot more… Hey There, -Rui Santos. Frameworks - Developing with Lua. Writing Android GUI Using LUA (Introduction) 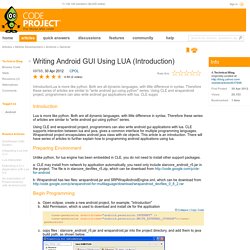 Both are all dynamic languages, with little difference in syntax. Therefore these series of articles are similar to "write android gui using python" series. Using CLE and wrapandroid project, programmers can also write android gui applications with lua. CLE supports interaction between lua and java, gives a common interface for multiple programming languages. Preparing Environment Unlike python, for lua engine has been embedded in CLE, you do not need to install other support packages. a: CLE may install from network by application automatically, you need only include starcore_android_r5.jar in the project. B: Wrapandroid has two files: wrapandroid.jar and SRPWrapAndroidEngine.xml, which can be download from http:/code.google.com/p/wrapandroid-for-multilaguage/download/wrapandroid_devfiles_0_8_2.rar Begin Programming copy file : SRPWrapAndroidEngine.xml to assets directory. 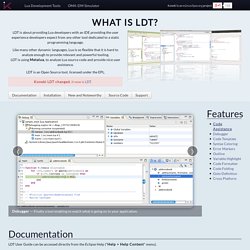 Debugger — Finally a tool enabling to watch what is going on in your application. Code Template — Use common statements quicker. Syntax Coloring — Just for getting code nicer to write and to read. Notice, locals in clear and globals in bold. Error Marker — Where is my mistake? Outline — Tired of scrolling? Variable Highlight — Shows you all references to one variable. Code Formatter — You code, we indent. Code folding — File is too big, comments are too long? Goto definition — Code navigation finally brought to Lua.