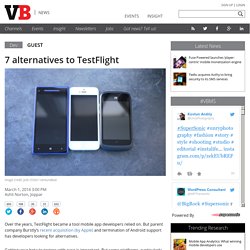 But parent company Burstly’s recent acquisition (by Apple) and termination of Android support has developers looking for alternatives. Getting your beta to testers with ease is important. But some platforms, particularly iOS, make the process a hassle. There are many predictions about Apple’s future plans for TestFlight. Iphone - sent to deallocated instance. Debugserver - iPhone Development Wiki. Debugserver is a console app that as server for remote gdb or lldb debugging. 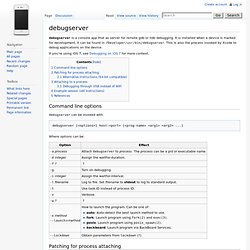 It is installed when a device is marked for development. It can be found in /Developer/usr/bin/debugserver. This is also the process invoked by Xcode to debug applications on the device. Redirecting debug output from XCode 4 console to a log file. Use SVN 1.7 in XCode 4.3+ Tl;dr: Skip to the good part! 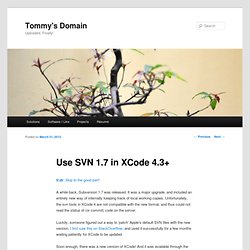 A while back, Subversion 1.7 was released. It was a major upgrade, and included an entirely new way of internally keeping track of local working copies. Unfortunately, the svn tools in XCode 4 are not compatible with the new format, and thus could not read the status of (or commit) code on the server. Luckily, someone figured out a way to ‘patch’ Apple’s default SVN files with the new version. I first saw this on StackOverflow, and used it successfully for a few months waiting patiently for XCode to be updated. Soon enough, there was a new version of XCode! Iphone - Xcode 4.2 showing the wrong line of code on error. Objective c - App crashes when launching after updating app via HockeyApp. Iphone - Xcode 4: create IPA file instead of .xcarchive. Symbolicating iPhone App Crash Reports. The Most Useful Objective-C Code I’ve Ever Written « Vincent Gable’s Blog. Actually, it’s the most useful code I’ve extended; credit for the core idea goes to Dave Dribin with his Handy NSString Conversion Macro. 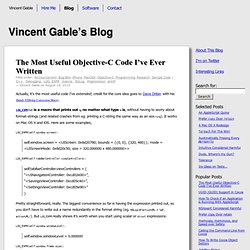 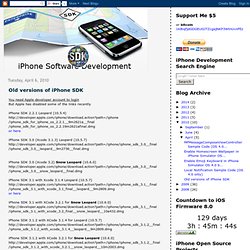 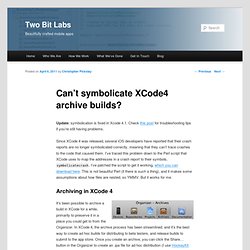 Check this post for troubleshooting tips if you’re still having problems. Since XCode 4 was released, several iOS developers have reported that their crash reports are no longer symbolicated correctly, meaning that they can’t trace crashes to the code that caused them. iTunes now funnels iPhone crash reports to developers. One of the most requested features from developers, automated crash reports, can now be submitted by users via iTunes 8.2. 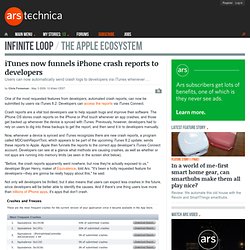 Developers can access the reports via iTunes Connect. Crash reports are a vital tool developers use to help squash bugs and improve their software. The iPhone OS stores crash reports on the iPhone or iPod touch whenever an app crashes, and those get backed up whenever the device is synced with iTunes. Previously, however, developers had to rely on users to dig into these backups to get the report, and then send it in to developers manually. Now, whenever a device is synced and iTunes recognizes there are new crash reports, a program called MDCrashReportTool, which appears to be part of the upcoming iTunes 8.2 update, sends these reports to Apple. "Before, the crash reports apparently went nowhere, but now they're actually exposed to us," developer Bryan Henry, maker of Equivalence, told Ars. Credit: Bryan Henry. Objective-C equivalent of Java packages. 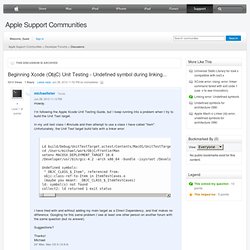 I'm following the Apple Xcode Unit Testing Guide, but I keep running into a problem when I try to build the Unit Test target. In my unit test class I #include and then attempt to use a class I have called "Item". Unfortunately, the Unit Test target build fails with a linker error: iOS beta testing on the fly. TestFlight: Super Simple, Over-The-Air App Beta Testing Comes To The iPhone. If you’ve ever had to test an unreleased iPhone application or wanted to test yours with real world users, you’ll know what a pain it is. 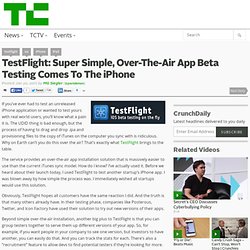 The UDID thing is bad enough, but the process of having to drag and drop .ipa and provisioning files to the copy of iTunes on the computer you sync with is ridiculous. Why on Earth can’t you do this over the air? That’s exactly what TestFlight brings to the table. The service provides an over-the-air app installation solution that is massively easier to use than the current iTunes sync model. How do I know? Obviously, TestFlight hopes all customers have the same reaction I did. Beyond simple over-the-air installation, another big plus to TestFlight is that you can group testers together to serve them up different versions of your app. All of this is still subject to Apple’s device testing limits (which is why the UDID is still needed), but again, TestFlight makes the process so much better. 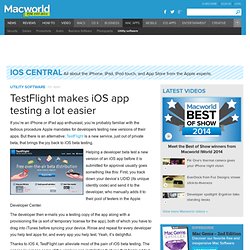 But there is an alternative: TestFlight is a new service, just out of private beta, that brings the joy back to iOS beta testing. Helping a developer beta test a new version of an iOS app before it is submitted for approval usually goes something like this: First, you track down your device’s UDID (its unique identity code) and send it to the developer, who manually adds it to their pool of testers in the Apple Developer Center.

The developer then e-mails you a testing copy of the app along with a provisioning file (a sort of temporary license for the app), both of which you have to drag into iTunes before syncing your device.