They've won - Uteeny - Homestuck [Archive of Our Own] They’ve won (and it feels so wonderful to think this, not ‘they’ve lost’ but ‘they’ve won). 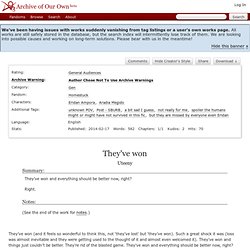 Such a great shock it was (loss was almost inevitable and they were getting used to the thought of it and almost even welcomed it). They’ve won and things just couldn’t be better. They’re rid of the blasted game. They’ve won and everything should be better now, right? The Gods That We Once Knew - natcat5 - Homestuck [Archive of Our Own] Remembrance, a homestuck fanfic. It feels like something is off when you take a sip of coffee. 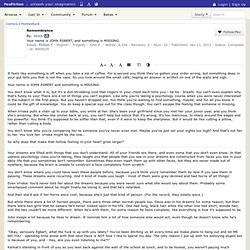 For a second you think they've gotten your order wrong, but something deep in your gut tells you that is not the case. So you look around the small café, hoping an answer is written on one of the walls and sigh. Like Medicine, a homestuck fanfic. AN: I, what. 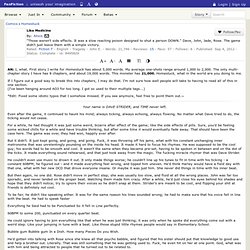 First story I write for Homestuck has about 5,000 words. My average one-shots range around 1,000 to 2,000. The only multi-chapter story I have has 8 chapters, and about 19,000 words. This monster has 21,000. Homestuck, what in the world are you doing to me. If I figure out a good way to break this into chapters, I may do that. *Edit: Fixed some idiotic typos that I somehow missed. Your name is DAVE STRIDER, and TIME never left. Even after the game, it continued to haunt his mind; always ticking, always echoing, always flowing.

But it faded as the dream crashed rumbling down. You closed your ears as well as eyes. Skaia Garden - Chapter 1 - martia - Homestuck [Archive of Our Own] Chapter Text Your name is JOHN EGBERT, you are 22 years old and you are the PRANKING MASTER. 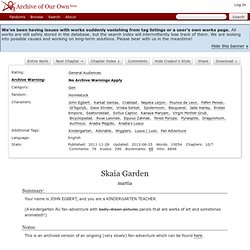 Though, that is just your secondary job now. You have just finished your Diploma in EARLY CHILDHOOD EDUCATION, and your FULL-TIME JOB is being a KINDERGARTEN TEACHER. Because of your EXCEPTIONAL SKILLS AND ATTITUDE, you were posted to a TROLL KINDERGARTEN. Today, you begin your FIRST DAY of school. SKAIA GARDEN is one of the few kindergartens build to INTEGRATE TROLL CHILDREN in this planet called EARTH. While most of the adult trolls don't care much for CULTURAL SENSITIVITY and prefer to just ARGUE with humans all the time, they do not mind having their CHILDREN TROLLS schoolfed through this HOOFBEASTEXCREMENT known as EDUCATION.

And the humans most definitely DO NOT MIND schoolfeeding little grubs to in hope that they will face less of these ARGUMENTS with the troll species in 20 years time. Archive of Our Own. Show Chapter. Some Measure Of Control (Notes From A Doomed Timeline) - Chapter 1 - orphan_account - Homestuck [Archive of Our Own] Chapter Text Jack doesn't want to admit it, but the changes are getting to him. 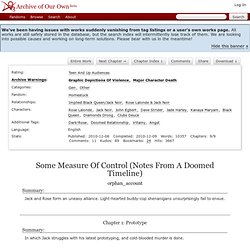 It isn't all bad. The businesslike dispatching of the orange brat and his obnoxious brother would have brought him a professional satisfaction anyway, but now the sight of crumpled and broken feathery things tumbling from the sky raises in him a predatory joy that is entirely feline. The dead crow brings him nothing but a dull, permanent ache in his chest. At least, he presumes that's the dead crow. But this most recent prototyping, this is something else. And then after an eternal instant the pain had ebbed away, and he was unstoppable. He reaches the edge of the sea and the water boils under his feet. The cat, he thinks. Being Jaspers had made him wonder what it was like to be the Courtyard Droll. Maybe that would be a good quip for the Seer's epitaph, he thinks. He chases Jaspersprite over the clouds, grinning all the way. Four titles - liquidCitrus - Homestuck [Archive of Our Own] It's one late night, when you and Dave are out killing Underlings and shooting the breeze, that he makes an offhand comment about having time in his head. 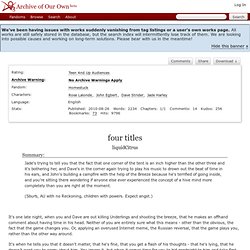 Neither of you are entirely sure what this means - other than the obvious, the fact that the game changes you. Or, applying an overused Internet meme, the Russian reversal, that the game plays you, rather than the other way around. UFUT - coldhope, saccharineSylph - Homestuck [Archive of Our Own] Loophole - Chapter 1 - saccharineSylph - Homestuck. Chapter Text She is delivered on a Tuesday. 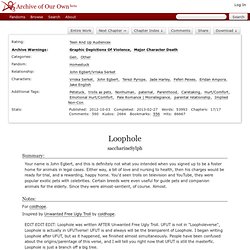 This is not what you intended when you signed up to be a foster home. At the most you got starving kittens or beaten dogs. Rebellion, a homestuck fanfic. AN: This turned into a completely different story then I thought it was going to be. 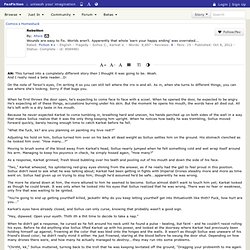 Woah.And I really need a beta reader...D: On the note of Terezi's eyes, I'm writing it so you can still tell where the iris is and all.