Web Snax: Super Simple Recipes for Easy Web Design. Are you ready to get a FULL web design foundation and overview (the equivalent of 12 power-packed smaller courses) all in one concise bundle from an artist and professor teaching web design since 2002 to hundreds of happy University students? 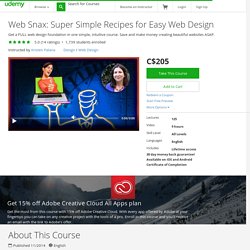 Use these bite-sized lessons to make your own website from scratch or learn how to manage a website that someone else created for you. Worried that you are too late to get started or there is too much you don't know? Online tools, software programs, coding languages, and methods change or come and go, but a good web design foundation will stay with you no matter which direction you go in or which tools you ultimately use.

This course will teach you best practice web design fundamentals that NEVER change (the way software programs change) along with several current and easy methods for creating beautiful websites. Learn at your own pace and in the order you choose. What Students Are Saying:"Excellent. Being happy and living at the moment: Aisha Chaudhari at TEDxPune. What Nobody Told You About Happiness. Stop searching for your passion. Why computer engineering is like standup comedy: Wayne Cotter at TEDxRainier. Computer science education: why does it suck so much and what if it didn’t? What’s the Difference Between Coding and Computational Thinking? In my last EdSurge article, “Computer Science Goes Beyond Coding,” I wrote about the difference between coding and computer science, to help us understand what we mean by phrases like “Teach kids to code” and “Computer science for all.” 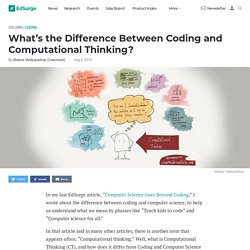 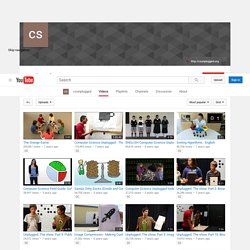 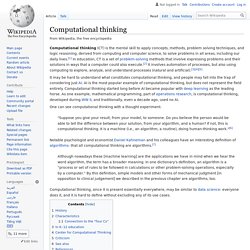 The term computational thinking was first used by Seymour Papert in 1980[2] and again in 1996.[3] Computational thinking can be used to algorithmically solve complicated problems of scale, and is often used to realize large improvements in efficiency.[4] Overview[edit] The phrase computational thinking was brought to the forefront of the computer science community as a result of an ACM Communications article on the subject by Jeannette Wing. Characteristics of Computational Thinking[edit] References[edit] Csprinciples.org. Edsurge. The “teach kids to code” movement has many thinking that computer science is just coding. Often the two are conflated since coding is definitely the most visible component of computer science. It is the magic that turns ideas into products; it provides the motivation to learn computer science. Kids want to learn so they can make cool stuff that is meaningful to them. However computer science goes beyond just coding. The K-12 standards for computer science, set by the Computer Science Teachers Association, defines the discipline as: “the study of computers and algorithmic processes, including their principles, their hardware and software designs, their applications, and their impact on society.”

This doodle shows some of these parts of computer science; coding is just one of them. Computer Science Unplugged.