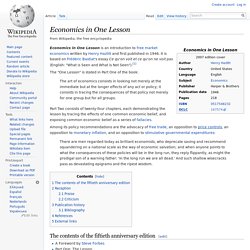 It is based on Frédéric Bastiat's essay Ce qu'on voit et ce qu'on ne voit pas (English: "What is Seen and What is Not Seen").[1] Joseph Bingham (1668-1723) / 16 titles, 52 vols. Democracy in America. This article is about the book written by Tocqueville. 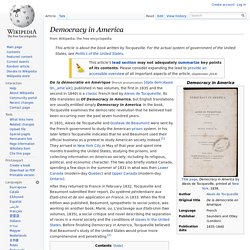 For the actual system of government of the United States, see Politics of the United States. De la démocratie en Amérique (French pronunciation: ​[dəla demɔkʁasi ɑ̃n‿ameˈʁik]; published in two volumes, the first in 1835 and the second in 1840) is a classic French text by Alexis de Tocqueville. Its title translates as Of Democracy in America, but English translations are usually entitled simply Democracy in America. In the book, Tocqueville examines the democratic revolution that he believed had been occurring over the past seven hundred years. In 1831, Alexis de Tocqueville and Gustave de Beaumont were sent by the French government to study the American prison system. After they returned to France in February 1832, Tocqueville and Beaumont submitted their report, Du système pénitentiaire aux États-Unis et de son application en France, in 1833. 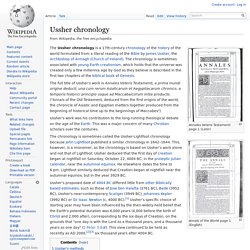 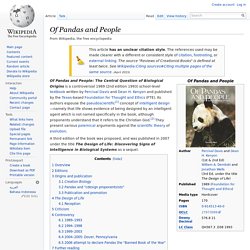 Kenyon and published by the Texas-based Foundation for Thought and Ethics (FTE). Its authors espouse the pseudoscientific[1] concept of intelligent design—namely that life shows evidence of being designed by an intelligent agent which is not named specifically in the book, although proponents understand that it refers to the Christian God.[2] They present various polemical arguments against the scientific theory of evolution. A third edition of the book was proposed, and was published in 2007 under the title The Design of Life: Discovering Signs of Intelligence in Biological Systems as a sequel. Overview[edit] The book argues that the origin of new organisms is "in an immaterial cause: in a blueprint, a plan, a pattern, devised by an intelligent agent". Editions[edit] Origins and publication[edit] Creation Biology[edit] 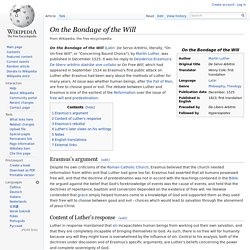 It was his reply to Desiderius Erasmus's De libero arbitrio diatribe sive collatio or On Free Will, which had appeared in September 1524 as Erasmus's first public attack on Luther after Erasmus had been wary about the methods of Luther for many years. At issue was whether human beings, after the Fall of Man, are free to choose good or evil. Book of Concord. The Social Construction of Reality. The Social Construction of Reality is a book about the sociology of knowledge written by Peter L.

Berger and Thomas Luckmann and published in 1966. The work introduced the term social construction into the social sciences and was strongly influenced by the work of Alfred Schütz. The central concept of Social Construction of Reality is that persons and groups interacting in a social system create, over time, concepts or mental representations of each others actions, and that these concepts eventually become habituated into reciprocal roles played by the actors in relation to each other.

When these roles are made available to other members of society to enter into and play out, the reciprocal interactions are said to be institutionalized. Ideachannelreads.tumblr. The General Theory of Employment, Interest and Money. Summary[edit] The central argument of The General Theory is that the level of employment is determined, not by the price of labour as in neoclassical economics, but by the spending of money (aggregate demand). 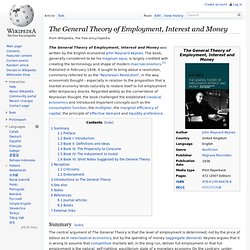 Keynes argues that it is wrong to assume that competitive markets will, in the long run, deliver full employment or that full employment is the natural, self-righting, equilibrium state of a monetary economy. On the contrary, under-employment and under-investment are likely to be the natural state unless active measures are taken. One implication of The General Theory is that an absence of competition is not the main issue and measures to reduce unemployment by benefits or wage cuts have no major effect.

Keynes sought to do nothing less but upend the conventional economic wisdom. Preface[edit] Keynes wrote four prefaces, to the English, German, Japanese and French editions, each with a slightly different emphasis. Book I: Introduction[edit] Book II: Definitions and Ideas[edit]