Miracles of the brain : Smell and taste (Harun Yahya) The Mind And The Brain: What’s The Difference? We all know what our brain is, right? It is that three pounds of “convoluted mass of gray and white matter” in our heads “serving to control and coordinate mental and physical actions.” OK. Now, define the mind. Not as easy, eh?! You may be surprised to find that there is no single, agreed upon definition of the mind. Dr. He coined the term “mindsight” to describe the human capacity to perceive the mind of the self and others. It is a powerful lens through which we can understand our inner lives with more clarity, integrate the brain, and enhance our relationships with others. It is a common belief that the mind is the activity of the brain. A second point on the Triangle of Well-Being is relationships which are the means by which information and energy are shared.

The Best Brain Possible. Let’s talk about the three pounds of jelly under your hair that separates you from a starfish. 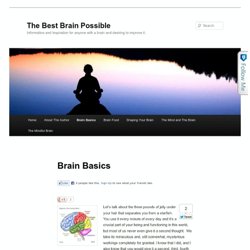 You use it every minute of every day and it’s a crucial part of your being and functioning in this world, but most of us never even give it a second thought. We take its miraculous and, still somewhat, mysterious workings completely for granted. I know that I did, and I also know that you would give it a second, third, fourth and umpteenth thought if your brain wasn’t working optimally. It wasn’t until after I sustained a serious brain injury that I realized just how integral the brain is to everything we do.

When garbled sounds and mangled words came out of my mouth; when my arms and legs would get all tangled up when trying to run, when I couldn’t remember my childrens’ ages, I realized just how much I’d taken my brain for granted. If you take your hand and make a fist with your thumb folded cozily inside, this is a “handy” model of your brain. Brain's Inner Workings: Student Manual. Download the PDF (32 pages) Part I Signals, Senses, and SurvivalThe Brain’s Inner Workings Video Part I: Structure and FunctionKeeping in TouchWalking the TightropeActivity: The NeuronDoes the Nose Know?

Activity: Signs and SignalsMembranes and MessagesActivity: Take That! Activity: It’s the Thought that Counts Part II The Alchemy of LifeActivity: Use Your Brain! Have you ever watched tiny animals, like ants, walk across a sidewalk? Even single-celled organisms can respond to environmental signals such as light, gravity or chemicals. Studying how single-celled organisms communicate can help us understand how the cells within larger organisms might coordinate their responses. They could sense the chemical oxygen that the algal cells released, and move toward it in a coordinated way.

Ants, bacteria, and some 50 trillion cells in your own body must work together to survive. Image source: nos.noaa.gov/coris_glossary/ index.aspx? Study Guide 1. 2. 3. 4. 5. 6. 7. Brain Facts. Brainread. Top Ten Myths About the Brain. Cognitive Function Article, Neuroscience Information, Mapping Brain Facts. The ancient Egyptians thought so little of brain matter they made a practice of scooping it out through the nose of a dead leader before packing the skull with cloth before burial. 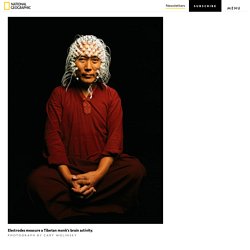 They believed consciousness resided in the heart, a view shared by Aristotle and a legacy of medieval thinkers. Even when consensus for the locus of thought moved northward into the head, it was not the brain that was believed to be the sine qua non, but the empty spaces within it, called ventricles, where ephemeral spirits swirled about. As late as 1662, philosopher Henry More scoffed that the brain showed "no more capacity for thought than a cake of suet, or a bowl of curds.

" Around the same time, French philosopher René Descartes codified the separation of conscious thought from the physical flesh of the brain. Though absurdly unscientific even for its time, phrenology was remarkably prescient—up to a point. Corina's brain all she is…is here "Hi," she whispers. "What's this, sweetie?