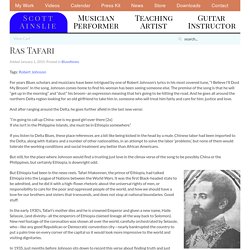 Posted in BluesNotes Tags: Robert Johnson For years Blues scholars and musicians have been intrigued by one of Robert Johnson’s lyrics in his most covered tune, “I Believe I’ll Dust My Broom”. In the song, Johnson comes home to find his woman has been seeing someone else. The premise of the song is that he will “get up in the morning” and “dust” his broom–an expression meaning that he’s going to be hitting the road. And after ranging around the Delta, he goes further afield in the last new verse: “I’m going to call up China–see is my good girl over there [2x] If she isn’t in the Philippine Islands, she must be in Ethiopia somewhere.”

If you listen to Delta Blues, these place references are a bit like being kicked in the head by a mule. But still, for the place where Johnson would find a trusting just love in the climax verse of the song to be possibly China or the Philippines, but certainly Ethiopia, is downright odd. Gibson Guitar Lessons: Arlen Roth. Resonators Explained, by Paul Kucharski. Resonators Explained ... those "other" guitars by Paul Kucharski September, 2004 Fingerstyle Guitar Store The first time I heard a resonator being played I knew immediately that it wasn't an "ordinary" acoustic guitar, but I wasn't quite sure what it was at the time either. 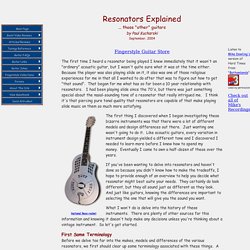 Because the player was also playing slide on it, it also was one of those religious experiences for me in that all I wanted to do after that was to figure out how to get "that sound". That began for me what has so far been a 10 year relationship with resonators. I had been playing slide since the 70's, but there was just something special about the nasal-sounding tone of a resonator that really intrigued me. The first thing I discovered when I began investigating these bizarre instruments was that there were a lot of different models and design differences out there. What I won't do is delve into the history of these instruments. Dobro® Resonator. The history and future of an American classic The Dobro® Resonator acoustic guitar has been one of the most influential instruments in American music, its sound simultaneously evoking bluegrass, traditional country music, Hawaiian, folk, and American blues. 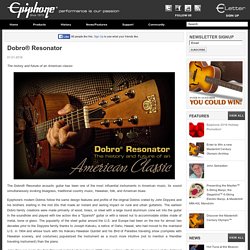 Epiphone's modern Dobros follow the same design features and profile of the original Dobros crated by John Dopyera and his brothers starting in the mid 20s that made an instant and lasting impact on rural and urban guitarists. The earliest Dobro family creations were made primarily of wood, brass, or steel with a large round aluminum cone set into the guitar in the soundhole and played with low action like a "Spanish" guitar or with a raised nut to accommodate slides made of metal, bone or glass.

Brad's Page of Steel - Suggested Listening. Here are some suggested CD's to seek out if you want to learn more about different types of steel guitar music. 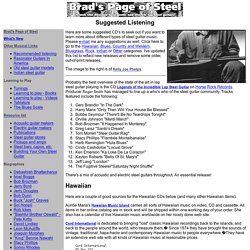 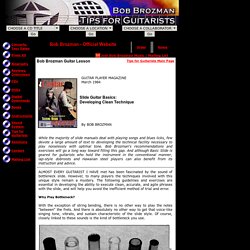 Bob Brozman's recommendations and exercises will go a long way toward filling this gap. Slide Guitar 101: Seven Secrets for Beginners. Well never know the identity of the first guitarist to take a bone or a polished stone and slide it along a guitar string. 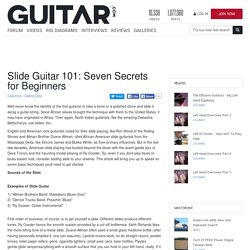 Since African slaves brought the technique with them to the United States, it may have originated in Africa. Then again, North Indian guitarists, like the amazing Debashis Battacharya, use slides, too. English and American rock guitarists noted for their slide playing, like Ron Wood of the Rolling Stones and Allman Brother Duane Allman, cited African-American slide guitarists from the Mississippi Delta, like Elmore James and Bukka White, as their primary influences. (tutorial) Romeo and Juliet - the resonator part.