Solidgen.jpg (208×300) Orgone Generators by Reinhard Stanjek in Vancouver - Richmond, BC. Crystal Orgone. Orgone. Orgone energy accumulator (with door closed) (with door open) Alternating layers of organic and non-organic materials inside the walls supposedly increase the orgone concentration inside the enclosure relative to the surrounding environment. 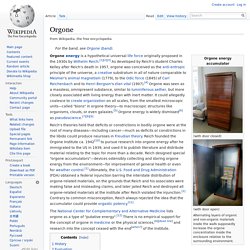 Reich's theories held that deficits or constrictions in bodily orgone were at the root of many diseases—including cancer—much as deficits or constrictions in the libido could produce neuroses in Freudian theory. Reich founded the Orgone Institute ca. 1942[10] to pursue research into orgone energy after he immigrated to the US in 1939, and used it to publish literature and distribute material relating to the topic for more than a decade. Orgonite - Peaceful Weapons - PART1.avi. Orgonite - Peaceful Weapons - PART2.avi.