Important note from the editors. 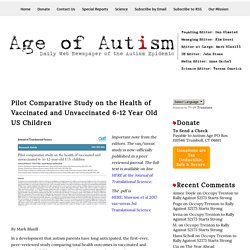 The vax/unvax study is now-officially published in a peer reviewed journal. The full text is available on line HERE at the Journal of Translational Science. The .pdf is HERE: Mawson et al 2017 vax-unvax Jnl Translational Science By Mark Blaxill In a development that autism parents have long anticipated, the first-ever, peer-reviewed study comparing total health outcomes in vaccinated and unvaccinated children was released on line yesterday. Working in partnership with the National Home Education Research Institute (NHERI), Dr. Vaccinated children were significantly more likely than the unvaccinated to have been diagnosed with a neurodevelopmental disorder: most notably, the risk of being affected by an Autism Spectrum Disorder (ASD) was 4.7 fold higher in vaccinated children; as well, ADHD risk was 4.7 fold higher and learning disability risk was 3.7 fold higher. 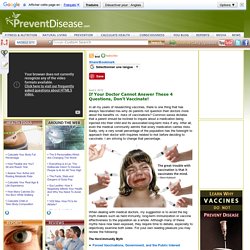 In all my years of researching vaccines, there is one thing that has always fascinated me--why do parents not question their doctors more about the benefits vs. risks of vaccinations? Common sense dictates that a parent should be inclined to inquire about a medication being injected into their child and its associated long-term risks if any. After all, even the medical community admits that every medication carries risks. Sadly, only a very small percentage of the population has the foresight to approach their doctor with inquiries related to risk before deciding to vaccinate. When dealing with medical doctors, my suggestion is to avoid the big myth makers such as herd immunity, long-term immunization or vaccine effectiveness to the population as a whole.

Forced Vaccinations, Government, and the Public Interest Vaccine Effectiveness. Toxic Vaccine Ingredients: The Devil is in the Details. March 06, 2018 By Deirdre Imus Toxins surround us in many forms, but those found in vaccines are of increasing concern among parents, and rightfully so. 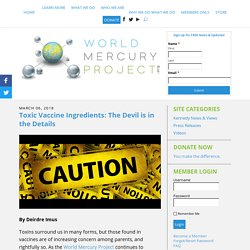 As the World Mercury Project continues to advocate for transparency and sound science in our nation’s vaccine program, it’s important to note that mercury, still found in some flu shots and other vaccines, isn’t the only substance standing in the way of a safer vaccination schedule. Other dangerous substances abound in the vaccines that our government agencies continue to insist are safe. New Study Links Pet Deaths And Cancer Epidemic To 'Over-Vaccinating' Vaccinating cats and dogs can cause a range of diseases and disorders – including autism – and veterinarians are often guilty of “over-prescribing vaccines to maximize profits“, according to a new study published by a U.S. 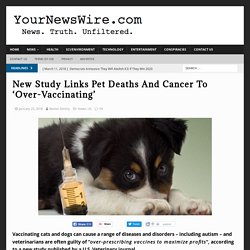 Veterinary journal. Annual vaccinations have been a cash cow, for vaccine companies and Vets, for many years now. However, according to a group of vets, this revenue is created under false and misleading science and the unnecessary vaccinations are seriously detrimental to the health of our pets. A group of Vets has also issued a Health Warning, advising pet owners to stop lining the pockets of vaccine companies: Giù Le Mani dai Dott.ri Gatti e Montanari – Autismo e Vaccini. Vaccination Information Network (VINE) - Accueil. NOW IT’S OFFICIAL: FDA Announced That Vaccines Are Causing Autism! - InShapeToday. The FDA has published conclusive proof on their website that the DTap vaccine can cause autism. 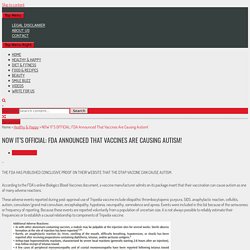 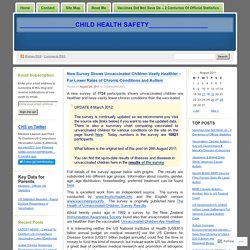 Cal-Oregon Unvaccinated Survey » Generation Rescue. "In this country, we have very high levels of vaccination as you probably know, and I think this year we have record immunization levels among all of our children, so to (select an unvaccinated group) that on a population basis would be representative to look at incidence in that population compared to the other population would be something that could be done. 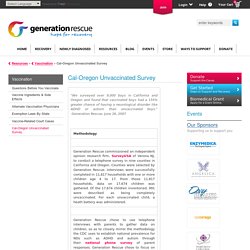 But as we're learning, just trying to look at autism in a community the size of Atlanta, it's very, very difficult to get an effective numerator and denominator to get a reliable diagnosis. I think those kind of studies could be done and should be done. Home - impfschaden.info - Mehr Transparenz über Impfungen, Impfen und Impfschäden. SIN Vacunas. Eustace Mullins - Murder by Injection (Full Length) Murder by Injection by Eustace Mullins. Murder by injection is one of the most important books ever written. 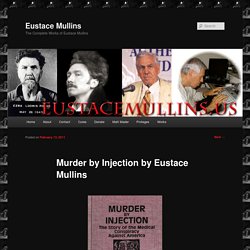 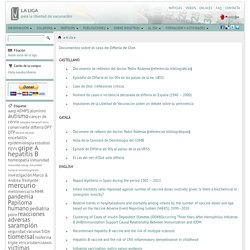 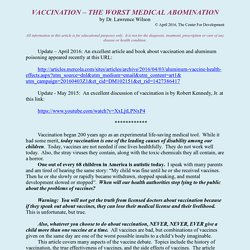 Lawrence Wilson © April 2016, The Center For Development All information in this article is for educational purposes only. It is not for the diagnosis, treatment, prescription or cure of any disease or health condition. Former science chief: 'MMR fears coming true' ANH Feature: The longest witch-hunt in UK medical history draws to a close - Alliance for Natural Health International. By the ANH Team On the 28th January 2010, the Fitness to Practise Panels & Investigation Committee of the UK’s General Medical Council (GMC) announced its findings on Dr Andrew Wakefield. In an all-out effort to create a slur seemingly intended to force the public and medical profession to once and for all give up on the possible MMR-autism link, the GMC said that Dr Wakefield acted "dishonestly and irresponsibly" in carrying out his research.

Dr Wakefield’s findings were part of a preliminary report conducted with 12 other doctors on just 12 children with autism spectrum disorder (ASD), published in the Lancet medical journal back in 1998. These charges were used as a justification, on February 2nd, for the Lancet to publish a formal retraction of the original paper. Ironically none of the charges made by the GMC are central to the main findings of Wakefield and colleagues’ original report.

Vaxxed. Vaxxed: From Cover-Up to Catastrophe is a 2016 American anti-vaccination[1][2][3][4][5][6] film about the alleged involvement of the Centers for Disease Control and Prevention (CDC) in the MMR vaccine controversy.[6] The filmmaker claims that it is a documentary "that explores the journeys of parents whose autistic children were plausibly affected by a vaccine [MMR]",[7] however critics consider it propaganda[8] with David Gorski labeling it a "propaganda film by a known scientific fraud".[3] The film was directed by discredited[9][10] former physician and anti-vaccine activist Andrew Wakefield and was set for premiere at the 2016 Tribeca Film Festival before being removed from screening.[11][12] Background In 1998 Wakefield published a study in The Lancet suggesting that vaccines caused autism.

The movie was produced by Autism Media Channel,[19] of which Wakefield is a director.[20] Narrative CDC Info Statement for MMR Vaccine, 2012 - Challenged in film. Criticism Dr. Will CDC Whistleblower on Vaccines Testify Before Congress? By Brian ShilhavyHealth Impact News This past week Representative Bill Posey entered a statement by CDC whistleblower Dr. William Thompson regarding fraud and the CDC MMR vaccine studies into the Congressional record.

Vaccination – don’t shoot the messengers! - Alliance for Natural Health International. Last Friday, Andrew Wakefield’s film Vaxxed was screened by Cinema Libre in New York. Most mainstream media ignored it – online media generally canned it. The Wikipedia entry is entirely condemnatory of the film, with not even a token nod to journalistic balance, alarming given it’s hard to deny the existence of significant voices in support of the film’s airing.