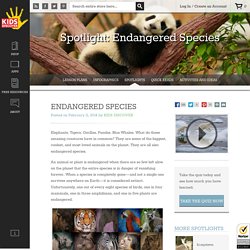 Tigers. Gorillas. Pandas. Blue Whales. What do these amazing creatures have in common? An animal or plant is endangered when there are so few left alive on the planet that the entire species is in danger of vanishing forever. Many of the animals pictured here—from the American bison to the polar bear—are on the IUCN Red List, the International Union for Conservation of Nature’s list of globally endangered, threatened, and vulnerable species.

Scientists estimate there are 7 to 10 million species on Earth. The Earth is mind-blowingly ancient—about 4.5 billion years old. This Galápagos sea lion is categorized as endangered on the IUCN Red List. Polar bears use the summer sea ice in the Arctic as a platform for hunting seals. Of course, there have been LOTS of changes to the world’s biodiversity over time. However, during Earth’s history there have been some extreme events that have killed off large numbers of species. Top 11 Most Amazing Extinct Animals! - Fun Facts You Need to Know! “Extinct” is the word we use to describe species that used to exist, but don’t any longer. 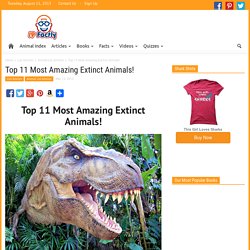 They can become extinct for many different reasons, including astronomic and geologic events (like asteroids and volcanoes), climate change, overpredation or irresponsible hunting, loss of habitat, lack of available food — and sometimes just getting bumped out by the competition! If we could travel back in time, here are 11 of the most amazing animals we would see! 1. Aurochs The aurochs first appeared about 2 million years ago, and is the ancestor of today’s domestic cows. The species was known to humans for thousands of years, featured in everything from early cave paintings to medieval coats of arms. The aurochs was hunted for its hide and meat by early humans, but by medieval times was mainly prized for its horns. 2. The dire wolf, featured in fantasy books and games today, was the largest wolf ever. The dire wolf is featured in the following book:25 Extinct Animals… since the Birth of Mankind! 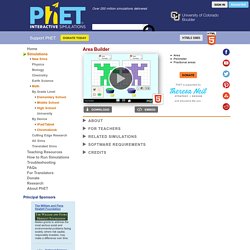 Compare the area and perimeter of two shapes side-by-side. Challenge yourself in the game screen to build shapes or find the area of funky figures. Sample Learning Goals Find the area of a shape by counting unit squaresDescribe the relationship between area and perimeterBuild shapes with a given area and/or perimeterFind the area of an irregular shape by decomposing into smaller, regular shapes (e.g., rectangles, triangles, squares)Determine the scale factor of similar shapesGeneralize how area and perimeter change when scaling shapes Version 1.0.0. Weathering, Erosion and Deposition.(3rd/4th grade teach) Fun Cave Facts for Kids - Interesting Information about Caves. Extra Practice: Grade 3, Unit 3, Chapter 6, Lesson 1 Quiz. 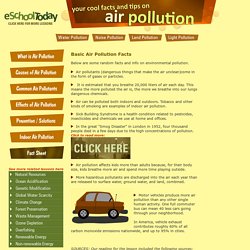 Air pollutants (dangerous things that make the air unclean)come in the form of gases or particles. It is estimated that you breathe 20,000 liters of air each day. This means the more polluted the air is, the more we breathe into our lungs dangerous chemicals. Air can be polluted both indoors and outdoors. Tobacco and other kinds of smoking are examples of indoor air pollution. Sick Building Syndrome is a health condition related to pesticides, insecticides and chemicals we use at home and offices. In the great "Smog Disaster" in London in 1952, four thousand people died in a few days due to the high concentrations of pollution. Air pollution. Air pollution consists of chemicals or particles in the air that can harm the health of humans, animals, and plants. 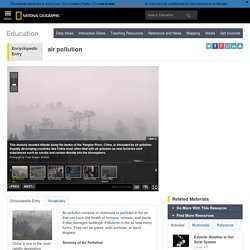 It also damages buildings. Pollutants in the air take many forms. They can be gases, solid particles, or liquid droplets. Sources of Air Pollution Pollution enters the Earth's atmosphere in many different ways. Urikares. Geogebra online - GeoGebra. Animal Migration: Facts (Science Trek: Idaho Public Television) Going Places — Migration It's March and spring is on its way. 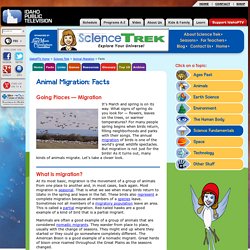 What signs of spring do you look for — flowers, leaves on the trees, or warmer temperatures? For many people spring begins when birds return, filling neighborhoods and parks with their songs. The annual migration of birds is one of the world's great wildlife spectacles. But migration is not just for the birds! What is migration? At its most basic, migration is the movement of a group of animals from one place to another and, in most cases, back again. Mammals are often a good example of a group of animals that are considered nomadic migrants. 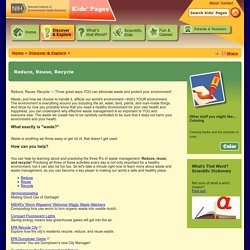 Waste, and how we choose to handle it, affects our world's environment—that's YOUR environment. The environment is everything around you including the air, water, land, plants, and man-made things. And since by now you probably know that you need a healthy environment for your own health and happiness, you can understand why effective waste management is so important to YOU and everyone else. The waste we create has to be carefully controlled to be sure that it does not harm your environment and your health. HOW LONG IT TAKES FOR SOME EVERYDAY ITEMS TO DECOMPOSE. - Down2Earth Materials. Certified compostable products will break down within a 180-day period. 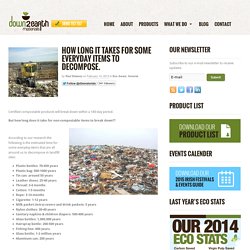 But how long does it take for non-compostable items to break down?? According to our research the following is the estimated time for some everyday items that are all around us to decompose in landfill sites: Plastic bottles: 70-450 years Plastic bag: 500-1000 years Tin can: around 50 years Leather shoes: 25-40 years Thread: 3-4 months Cotton: 1-5 months Rope: 3-14 months Cigarette: 1-12 years Milk packet (tetra) covers and drink packets: 5 years Nylon clothes: 30-40 years Sanitary napkins & children diapers: 500-800 years Glass bottles: 1,000,000 yearsHairspray bottle: 200-500 years Fishing line: 600 years. GOING GREEN! (Earth Day song for kids about the 3 R's- Reduce, Reuse, and Recycle!