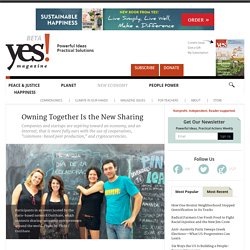 The HEXACO Personality Inventory-Revised. Personality and Social Dynamics Lab. The Myth of Collaboration. Rogier Noort just published a post on his site, for a great part based on an interview he did with me during the Enterprise 2.0 Summit in Paris in February of this year. 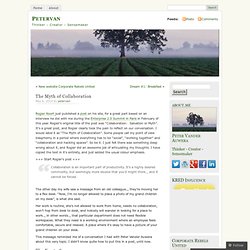 Rogier’s original title of the post was “Collaboration: Salvation or Myth”. It’s a great post, and Rogier clearly took the pain to reflect on our conversation. I would label it as “The Myth of Collaboration”. Some people call my point of view blasphemy in a period where everything has to be “social”, “working together” and “collaboration and hacking spaces”. Is Sharewashing the new Greenwashing? There’s a debate going on about what a “sharing economy” actually constitutes – and that’s a good thing. 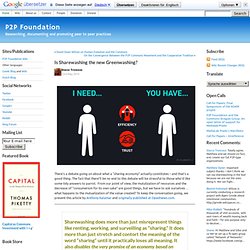 The fact that there’ll be no end to this debate will be stressful to those who’d like some tidy answers to parrot. From our point of view, the mutulization of resources and the decrease of “consumerism for its own sake” are good things, but we have to ask ourselves … what happens to the mutualization of the value created? To keep the conversation going, we present this article by Anthony Kalamar and originally published at Opednews.com. Google Ventures: Your Design Team Needs A War Room. Here's How To Set One Up.

25 Fascinating Charts Of Negotiation Styles Around The World. Language is only the most obvious part of the global communication gap. 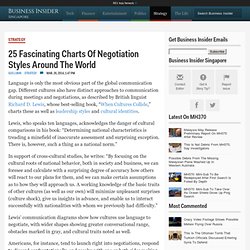 Different cultures also have distinct approaches to communication during meetings and negotiations, as described by British linguist Richard D. Amsterdam embraces sharing economy. The City of Amsterdam has made an important step towards the emerging sharing economy. 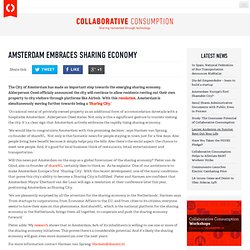 Alderperson Ossel officialy announced the city will continue to allow residents renting out their own property to city visitors through platforms like Airbnb. With this resolution, Amsterdam is simultaneously moving further towards being a ‘Sharing City.’ ‘Occasional rental of privately-owned property as an additional form of accommodation dovetails with a hospitable Amsterdam’, Alderperson Ossel states.

Not only is this a significant gesture to tourists visiting the city. It’s a clear sign that Amsterdam actively embraces the rapidly rising sharing economy. Go Inside Google Garage, The Collaborative Workspace That Thrives On Crazy, Creative Ideas. The Science of What Makes an Introvert and an Extrovert. How Mechanical Turkers Crowdsourced a Huge Lexicon of Links Between Words and Emotion. One of the buzzphrases associated with the social web is sentiment analysis. 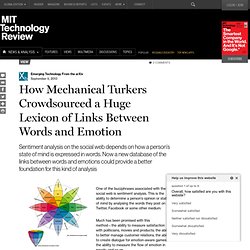 10 Things We Learned from the GOOD Exchange Fellowship. Last week, we brought together five incredible individuals from around the world to participate in our first-ever fellowship program, the GOOD Exchange. 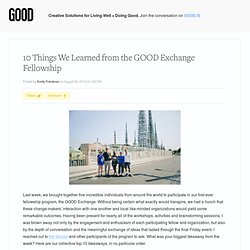 Without being certain what exactly would transpire, we had a hunch that these change-makers’ interaction with one another and local like-minded organizations would yield some remarkable outcomes. Having been present for nearly all of the workshops, activities and brainstorming sessions, I was blown away not only by the engagement and enthusiasm of each participating fellow and organization, but also by the depth of conversation and the meaningful exchange of ideas that lasted through the final Friday event.

I reached out to the fellows and other participants of the program to ask: What was your biggest takeaway from the week? Here are our collective top 10 takeaways, in no particular order. 10 Things We Learned from the GOOD Exchange Fellowship. A win-Winco situation: Grocery chain treats employees well and has low prices. There are eight WinCo grocery stores within 100 miles of where I live. 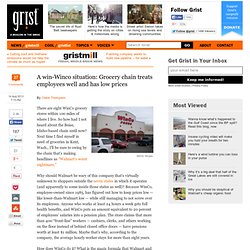 68% of CEOs still aren’t on any social networks whatsoever - Quartz. When Warren Buffett burst onto the Twitter scene back in May, the social-media world went berserk. 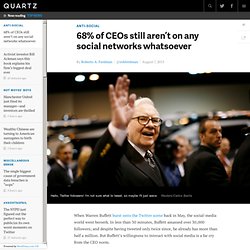 In less than 30 minutes, Buffett amassed over 30,000 followers; and despite having tweeted only twice since, he already has more than half a million. Connect, Then Lead. Artwork: Jessica Snow, Curly Words, 2011, acrylic on paper, 17" x 21" Is it better to be loved or feared? 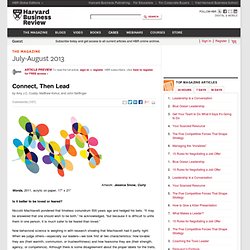 Niccolò Machiavelli pondered that timeless conundrum 500 years ago and hedged his bets. “It may be answered that one should wish to be both,” he acknowledged, “but because it is difficult to unite them in one person, it is much safer to be feared than loved.” Now behavioral science is weighing in with research showing that Machiavelli had it partly right: When we judge others—especially our leaders—we look first at two characteristics: how lovable they are (their warmth, communion, or trustworthiness) and how fearsome they are (their strength, agency, or competence).

The Most Effective Ways to Make It Right When You Screw Up - Heidi Grant Halvorson. By Heidi Grant Halvorson | 8:00 AM June 19, 2013 After promising your boss you would complete an important assignment on time, you realize you’re behind and it’s going to be late. You unintentionally leave a colleague out of the loop on a joint project, causing him or her to feel frustrated and a bit betrayed. On the subway, you aren’t paying attention and accidentally spill hot coffee all over a stranger’s expensive suit.

The Most Effective Ways to Make It Right When You Screw Up - Heidi Grant Halvorson. Rachel Botsman: The currency of the new economy is trust. Brain-to-brain interface allows transmission of tactile and motor information between rats. Researchers have electronically linked the brains of pairs of rats for the first time, enabling them to communicate directly to solve simple behavioral puzzles. A further test of this work successfully linked the brains of two animals thousands of miles apart—one in Durham, N.C., and one in Natal, Brazil.

The results of these projects suggest the future potential for linking multiple brains to form what the research team is calling an "organic computer," which could allow sharing of motor and sensory information among groups of animals. The study was published Feb. 28, 2013, in the journal Scientific Reports. "Our previous studies with brain-machine interfaces had convinced us that the rat brain was much more plastic than we had previously thought," said Miguel Nicolelis, M.D., PhD, lead author of the publication and professor of neurobiology at Duke University School of Medicine. Social whodunnit competition launches in India - tech - 31 January 2013. An experiment by Microsoft Research aims to see how people will interact to solve a puzzle that relies on teamwork and cellphones ONLINE social networks have helped spur protest movements and put politicians in office.

But the power of these networks is built on easy access to platforms like Facebook and Twitter. Now researchers at Microsoft are about to test the power of social technologies in a tougher setting: India, where just a tenth of the population has internet access. From Chicago… to the RSA: two group facilitation methods to help you put an end to ‘aimless drift’ Chicago gave rise to the radical community organising approach of Saul Alinsky (made famous by its Barack Obama connection – and a rather unexpected endorsement by David Cameron). These Flexible e-Paper Tablets Could Change Your Desk Forever. Signing Science - Interactive Feature. 3 Big Insights From Today's Top Design Thinkers. Frog Creates An Open-Source Guide To Design Thinking. OuiShare - Creative community for the Collaborative Economy. The ethics of recycling content: Jonah Lehrer accused of self-plagiarism.

12 Most Beneficial People-Skills to Hit the Bullseye When You Have No Power. Success in companies requires working across the organization in collaboration with others throughout the globe. Owning Your Words: Personal Clouds Build Professional Reputations. About « The polymath blog. About This group blog, together with its associated wiki, is intended to host “polymath” projects – massively collaborative mathematical research projects. You're Hired. Now Figure Things Out (With The Help Of This Whimsical Handbook) Five Millennial Myths.

If you believe the conventional wisdom, everyone under the age of 30 is needy and narcissistic. Giving Constructive Feedback. Performance feedback can be given two ways: through constructive feedback or through praise and criticism. Don't fall into the trap of giving praise and criticism on employee performance. Constructive feedback is information-specific, issue-focused, and based on observations. Brainstorming Doesn’t Really Work. The Brainstorming Process Is B.S. But Can We Rework It? Websites Let People Farm Out Chores. The Penguin and The Leviathan: How Cooperation Triumphs Over Self Interest. 50 Open Source Technologies / Projects to Look Out For in 2012.