[Infographic] Internet Unbundling in Saudi Arabia. Even with 2FA, Google accounts can be hacked with just a phone number. I work as a sales rep in-store for a telco. 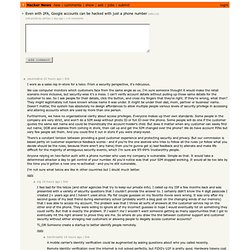 From a security perspective, it's ridiculous. We use computer monitors which customers face from the same angle as us. I'm sure someone thought it would make the retail scenario more inclusive, but security-wise it's a mess. I can't verify account details without pulling up those same details for the customer to see. So I ask people for their details, click the button, and cross my fingers that they're right. Furthermore, we have no organisational clarity about access privileges. 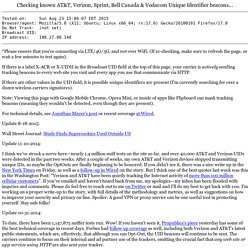 (If re-checking, make sure to refresh the page, or wait a few minutes to test again). Nadim Kobeissi. China's Xiaomi, the World's Fastest-Growing Phone Maker. On May 15, behind the curving, imperial facade of the China National Convention Center in Beijing, a veteran technology executive named Lei Jun walks onstage before a thousand raucous fans and members of the media. 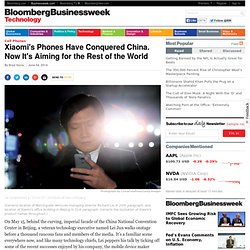 It’s a familiar scene everywhere now, and like many technology chiefs, Lei peppers his talk by ticking off some of the recent successes enjoyed by his company, the mobile device maker Xiaomi. Sales have been higher than expected; more than 50 million people use the company’s MIUI operating system. Then he gets to the new products, which today are a smart TV that can be controlled with an app and an Android-powered tablet computer, called Mi Pad, that comes in five colors and is priced to undercut the iPad mini. “I hope through our endeavor we can make Apple (AAPL) feel some pressure,” Lei says. The crowd reacts to each product revelation as if it’s a World Cup goal. إيجار. Wp-the-mobile-cybercriminal-underground-market-in-china. President Obama Not Allowed to Use iPhone for Security Reasons. President Barack Obama publicly explained why he is sticking with his bulky Blackberry—the super-secure device is the only one he is allowed to carry. 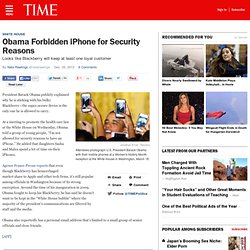 At a meeting to promote the health care law at the White House on Wednesday, Obama told a group of young people, “I’m not allowed for security reasons to have an iPhone.” He added that daughters Sasha and Malea spend a lot of time on their iPhones. Agence France-Presse reports that even though Blackberry has hemorrhaged market share to Apple and other tech firms, it’s still popular among officials in Washington because of its strong encryption.

Around the time of his inauguration in 2009, Obama fought to keep his Blackberry; he has said he doesn’t want to be kept in the “White House bubble” where the majority of the president’s communications are filtered by staff and the media. Welcome to Forbes. New Google Wallet App Moves Past NFC and to All Major Carriers - Jason Del Rey - Commerce. Google is launching a new version of its Google Wallet app for Android today and there are some big changes. 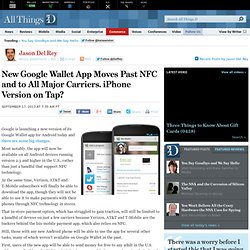 Most notably, the app will now be available on all Android devices running version 2.3 and higher in the U.S., rather than just a handful that support NFC technology. At the same time, Verizon, AT&T and T-Mobile subscribers will finally be able to download the app, though they will not be able to use it to make payments with their phones through NFC technology in stores.

That in-store payment option, which has struggled to gain traction, will still be limited to a handful of devices on just a few carriers because Verizon, AT&T and T-Mobile are the backers behind the Isis mobile payment app, which also relies on NFC. Still, those with any new Android phone will be able to use the app for several other tasks, many of which weren’t available on Google Wallet in the past. One other big change has to do with how Wallet users find and redeem discounts and promotions. Urbita, The Pinterest For Cities, Blows Past 10M Unique Visitors In August With Mobile Site Launch. FounderFuel Fall 2012 cohort grad Urbita, a startup based in LA and Buenos Aires, has managed to quietly amass a huge consumer following, having topped 8 million monthly unique visitors in July, and then managing a 25 percent increase over the course of August to more than 10 million monthly unique visitors. 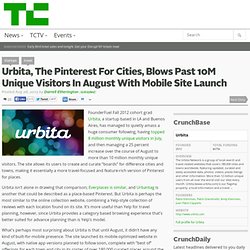