Bushfire smoke could cause lung problems for generations, US monkey study suggests. Updated 29 Jan 2020, 3:05amWed 29 Jan 2020, 3:05am Monkeys in Northern California are providing valuable clues to the health cost of exposure to bushfire smoke, revealing it could have potentially life-threatening consequences for humans. Key points: Scientists have studied the impact of bushfire smoke on monkeys since 2008The monkeys exposed to smoke had 20 per cent less lung capacity There are fears that prolonged exposed to smoke could affect human health Large swathes of south-eastern Australia were blanketed in smoke during the recent bushfire crisis, consistently exposing people to unsafe levels of noxious fumes not seen in some of the world's most polluted cities. But a decade-long study, tracking the impacts on a cohort of rhesus macaque monkeys from infancy to adulthood in California, is providing startling insight into what humans could expect in the future. 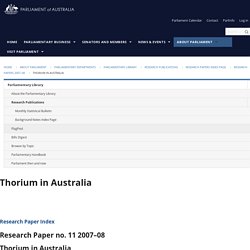 Nuclear futures: thorium could be the silver bullet to solve our energy crisis. The only source of energy that can meet global demand while avoiding greenhouse gas emissions is nuclear power. 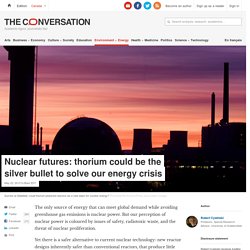 But our perception of nuclear power is coloured by issues of safety, radiotoxic waste, and the threat of nuclear proliferation. Yet there is a safer alternative to current nuclear technology: new reactor designs inherently safer than conventional reactors, that produce little waste, and are proliferation resistant. The new designs allow us to reuse our legacy of radiotoxic waste as fuel. The secret is a shiny, silver-coloured element called thorium, and it’s not new.

Theconversation. Australia has developed something of an allergic reaction to any mention of uranium or nuclear energy. 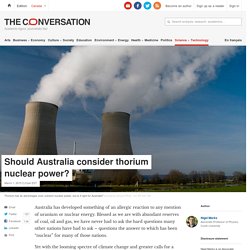 Blessed as we are with abundant reserves of coal, oil and gas, we have never had to ask the hard questions many other nations have had to ask – questions the answer to which has been “nuclear” for many of those nations. The Energy From Thorium FoundationBeyond Helen Caldicott! Dr. 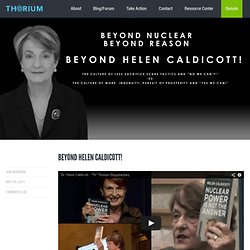 Helen Caldicott is the most prominent anti-nuclear activist in the world. She’s been featured on CNN, 60 Minutes, CBC and Democracy Now. The Energy From Thorium Foundation Can We All Just Get Along: the Oberlin College Experience. The home of documentary. Despite meltdowns and mountains of radioactive waste, could nuclear really save the planet? 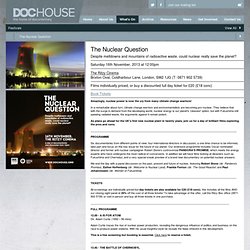 The Ritzy CinemaBrixton Oval, Coldharbour Lane, London, SW2 1JG (T: 0871 902 5739) Films individually priced, or buy a discounted full day ticket for £20 (£18 conc) Amazingly, nuclear power is now the cry from many climate change warriors! In a remarkable about-turn, climate change warriors and environmentalists are becoming pro-nuclear. They believe that with the surge in demand from the developing world, nuclear energy is our planet's 'cleanest' option, but with Fukushima still spewing radiated waste, the arguments against it remain potent. As plans go ahead for the UK's first new nuclear plant in twenty years, join us for a day of brilliant films exploring the pros and cons.

Six documentaries from different points of view; four international directors in discussion; a one-time chance to be informed, take part and focus on this key issue for the future of our planet. 12.00 - A IS FOR ATOM Dir. The Passion of Alvin Weinberg. The 59-year-old physicist was in something of a panic. 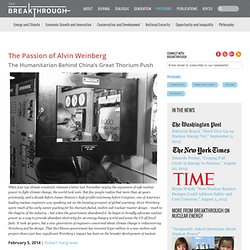 The earth was getting hotter, and nobody in Washington seemed to care. Nuclear power — the only realistic way to produce a lot of electricity with few carbon emissions — was the solution. But rising costs for nuclear power and the power of the coal lobby appeared to be trumping environmental concerns, and rationality itself. He started writing articles. Design of world's first Thorium based nuclear reactor is ready. More nukes: James Hansen leads call for “safer nuclear” power to save climate. James Hansen and three other PhD-wielding climate scientists published an open letter Sunday calling on the world to ramp up the development and deployment of “safer nuclear energy systems” to help slow climate change. 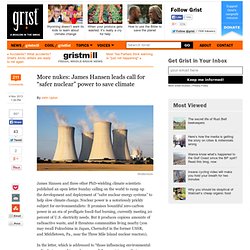 Nuclear power is a notoriously prickly subject for environmentalists: It promises bountiful zero-carbon power in an era of profligate fossil-fuel burning, currently meeting 20 percent of U.S. electricity needs. But it produces copious amounts of radioactive waste, and it threatens communities living nearby (you may recall Fukushima in Japan, Chernobyl in the former USSR, and Middletown, Pa., near the Three Mile Island nuclear reactors). Global demand for energy is growing rapidly and must continue to grow to provide the needs of developing economies. At the same time, the need to sharply reduce greenhouse gas emissions is becoming ever clearer. The Engineer December 2013. Nuclear power plant accidents: listed, visualised and ranked since 1952. How often do nuclear power plants go wrong? 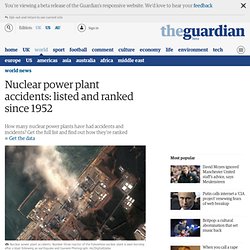 How many accidents and incidents are there? The explosions and nuclear fuel rods melting at Japan's Fukushima nuclear power plant, following the Sendai earthquake and tsunami last week, have caused fears of what will happen next. Today Japan's nuclear safety agency has raised the nuclear alert level for Japan from four to five - making it two levels lower than the Chernobyl disaster in 1986. So far, the Japanese authorities have maintained that there is "no cause to fear a major nuclear accident". We have identified 33 serious incidents and accidents at nuclear power stations since the first recorded one in 1952 at Chalk River in Ontario, Canada. The information is partially from the International Atomic Energy Authority - which, astonishingly, fails to keep a complete historical database - and partially from reports.

Using Google Fusion tables, we've put these on a map, so you can see how they're spread around the globe: Data summary. More nukes? Are you kidding? Enviros push back against Hansen’s call. We told you on Monday about an open letter penned by James Hansen and three other prominent climate scientists calling on the world to ramp up development and deployment of “safer” nuclear power. 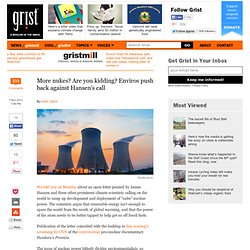 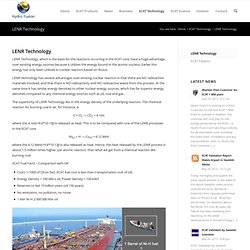 Earlier this energy has only been utilized in nuclear reactors based on fission. LENR technology has several advantages over existing nuclear reactors in that there are NO radioactive materials involved, and that there is NO radioactivity and NO radioactive waste from the process. At the same time it has similar energy densities to other nuclear energy sources, which has far superior energy densities compared to any chemical energy sources such as oil, coal and gas.

THEO13-20131028-hjxu.pdf. BBC World Service - In the Balance, Energy Dreams. ThoriumNuclearSlideshow. The many ways that molten salt reactors can fight the other CO2 scourge – ocean acidification - The Weinberg Foundation. Just add limestone. Molten salt reactors could process limestone and dolomite into a substance that would help neutralize ocean acid, says Alex Cannara. Ask anyone to identify the consequences of CO2 emissions, and the answer that most people who are not climate change skeptics will give is “global warming.” It’s a good reply. Rising concentration of atmospheric CO2 is heating up the planet to temperatures that could have broad, catastrophic climate consequences by 2050. But while global warming rightly receives plenty of attention, there’s another ongoing and lesser known CO2 scourge that could be even more disastrous: ocean acidification. Simply put, up to half of the world’s man-made CO2 emissions land in the ocean, where it forms carbonic acid which will eventually wreak havoc if not stopped according to the United Nations-backed Ocean Acidification Network and other groups.