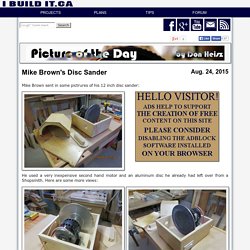 Here are some more views: He did not include a tilting table of any sort but thinks he may someday add it. I think it looks pretty good as it is. Thanks to Mike Brown for submitting the photos of his well-built machine. Visit often to see things we find interesting, either from our own experience or elsewhere in the world. If you have a photo you think is interesting or humourous, feel free to send it our way at ibuilditdailypicture@gmail.com. And sign up for convenient email updates to stay on top of the latest projects and build articles. Homemade Press Drill Mini Milling Mill Router DIY Spindle Slide Machine. Cristiana Felgueiras' Jointer Made from a Planer - Featured Video Project. Cosmas B's Homemade Table Saw - Featured Video Project #24. Cosmas B's Homemade Table SawAug. 5, 2015 Similar to yesterday's video, today's video is of a tablesaw build. 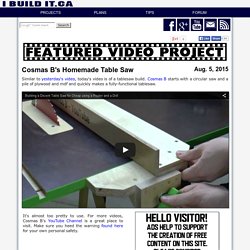 Cosmas B starts with a circular saw and a pile of plywood and mdf and quickly makes a fully-functional tablesaw. It's almost too pretty to use. For more videos, Cosmas B's YouTube Channel is a great place to visit. Make sure you heed the warning found here for your own personal safety. Sign up for convenient email updates to stay on top of the latest projects and build articles. Marius Hornberger's K-Body Clamp Build - Featured Video Project #7. Marius Hornberger's K-Body Clamp BuildJuly 13, 2015. 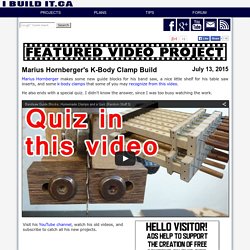 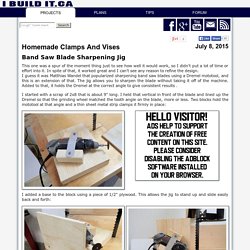 In spite of that, it worked great and I can't see any reason to refine the design. I guess it was Matthias Wandel that popularized sharpening band saw blades using a Dremel mototool, and this is an extension of that. The jig allows you to sharpen the blade without taking it off of the machine. I started with a scrap of 2x8 that is about 9" long. I added a base to the block using a piece of 1/2" plywood.

With the basic jig made, I could fine tune the angle by loosening the screws and rotating the Dremel until it was exactly right: The band saw fence was set to put the grinding wheel centred on the blade. The results are impressive, it took roughly 10 minutes to sharpen a 120" blade. Of course, it can be changed to suit your size saw, but this should work for most. Other Interesting Projects: MLCS Router Table Tool Stands. All customer reviews and ratings Average Customer Rating: (4 reviews) Add your own review for this product Roller Support Router Table Tool Stand (5/5), Jan 25, 2014 By J. 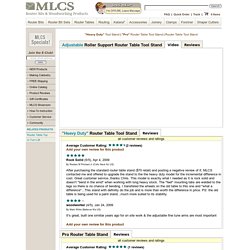 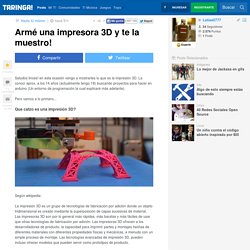 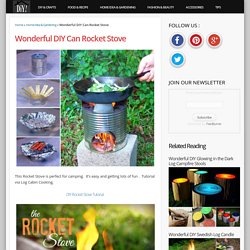 It’s easy and getting lots of fun . Tutorial via Log Cabin Cooking. Air engine 2. I had previously built a reciprocating air engine out of wood back in 1985, and posted it here in 2007. 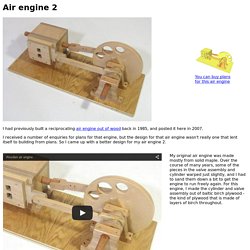 I received a number of enquiries for plans for that engine, but the design for that air engine wasn't really one that lent itself to building from plans. So I came up with a better design for my air engine 2. One of the trickiest bits of the engine is making the crankshaft. The main crank for the engine is actually directly off the flywheel, but a secondary crank is needed to actuate the sliding valve assembly. This secondary crank only has a 6 mm throw to it, so I could make it by gluing another piece of dowel to the main shaft. The initial cut away was made with a band saw, but the rest I carefully carved out by hand.

I made a guide to check how much to cut away. Once I was satisfied that the middle part of my crankshaft was sufficiently round, I made two reinforcing plates to glue on either side of it. The finished crankshaft (after varnishing) There are no gaskets in the assembly. Homemade Mini Wood Mill Router Milling Machine by Slide Axis CNC and Table Press Drill. Альтернативный аналог Домино. Portable Mortising Router - part 1. Homemade "Kreg Jig"Pockethole Machine Drilling Hardwood 4. Wooden Tool Man.