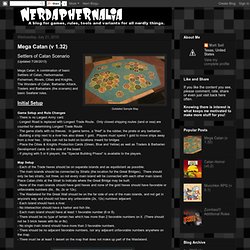 Initial Setup Game Setup and Rule Changes. AsoBrain Settlers of Catan Map Images. AsoBrain Settlers of Catan Map Images I've been playing Sea3D (settlers of catan OpenGL windows) for quite sometime. It still has better 5 or 6 player maps, Jungle and Volcano variants . For instant take the Through the Desert map. Asobrain map has one less resource hex than the 4 player map in Sea3D . In other words, it's exactly the same as the 3 player map in AsoBrain. After I threw this page together I come to find out there already is a map browser on AsoBrain ....duhhhhhhhhhhhhhh.

Hotseat is playing with friends on one computer...ahhh not as fun as playing a network game over the internet with strangers. Players start out by taking turns and placing a 2 cities and 2 roads. Basically you can change view of the map whichever works for you best. When a player rolls it'll highlight the roll and show the hexagons. Welcome to PlayCatan! Play Settlers of Catan for free - settle online over the internet! - PlayCatan.com. Catan - Introductory Game. Scurvy Jake's Pirate Blog » Make Your Own 3D Settlers of Catan. Afternoon watch, 3 bells (1:41 pm) First of all, many thanks to those people that pioneered this idea. Without their detailed walkthroughs, I would never have attempted a project of this scale. Special thanks go out to Dan Becker and Gerard Boom for all their work. I just added a version of this page to Instructables, which you can view as an alternative to this page, although my images here are higher res. Get some FIMO! First off, you need some modeling clay.

Roll the clay flat, and use something on the sides to keep the thickness even. You can get them for a couple of dollars at any home improvement store. This next step can potentially be the most time-consuming: model your terrain. The more time you spend on this step, the better your set will look. Before you get started making molds, you should pick up a few supplies. I strongly recomment some rubber gloves, a big stack of plastic cups, and some plastic spoons.

When you've got your originals done, you're ready to make the molds. Gold. Settlers of America - Trails to Rails - Catan.com. As more and more settlers head west, new cities pop up like mushrooms. 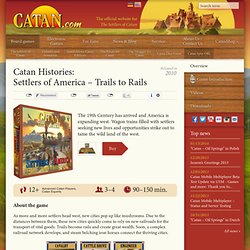 Due to the distances between them, these new cities quickly come to rely on new railroads for the transport of vital goods. Trails become rails and create great wealth. Soon, a complex railroad network develops, and steam belching iron horses connect the thriving cities. Experience the pioneer days of the Wild West! Send your settlers westward to found cities and to develop the expanding railroad network. Www.mayfairgames.com. Prof Easy's Quick Guide - Settlers of America - Trails to Rails - Catan.com. Official Site - Downloadable PDF Rules for Catan Games - Catan.com. Game Rules for Download If you misplaced your game rules for one of our games, or you want to get more information about a game before you buy it, here you may download the printed game rules as PDF files for free. 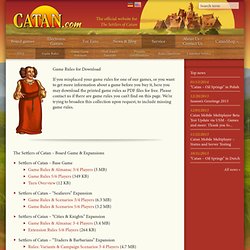 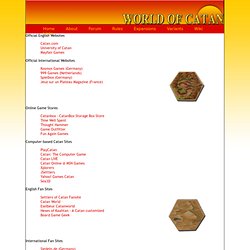 Catan RL FAQ. The Settlers of Catan® 4th Edition Frequently Asked Questions Since the announcement of the Catan® re-launch, there have been a lot of conversations on various websites and newsgroups. 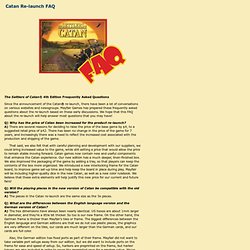 Mayfair Games has prepared these frequently asked questions about the re-launch based on these early discussions. We hope that this FAQ about the re-launch will help answer most questions that you may have! Q) Why has the price of Catan been increased for the product re-launch? A) There are several reasons for deciding to raise the price of the base game by $4, to a suggested retail price of $42. That said, we also felt that with careful planning and development with our suppliers, we could bring increased value to the game, while still setting a price that would allow the price to remain stable moving forward. Q) Will the playing pieces in the new version of Catan be compatible with the old version? Q) What are the differences between the English language version and the German version of Catan? Constructing a 3D Settlers of Catan Board - Part I. Image Gallery. Matildadad. Need a customized game component? 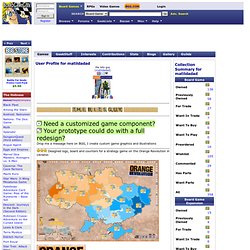 Related:  Constructing a 3D Settlers of Catan Board - Part I   -  Education   -  Enterprise