Alphanumeric Laser Projector. Cr0sh, how did you all about those old things? 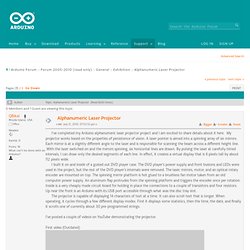 Just curious. There's a word missing in that sentence, so if what I write below makes no sense, then please supply the missing word...? Basically, I know about all of this because I read - I read way too much, way too often, about way too many things. Early television is one of the subjects which I have studied; you can't understand the history of computers (another love of mine) without running across it. I have personal library at home covering a range of subjects, both fiction and non-fiction, over 1000 volumes. I'm an information junkie, a bibliophile, a voracious reader. The sad thing is (well, to me) - I'm not a fast reader; I wish I read faster (my greatest problem is sub-vocalization).

View topic - about controlling your system with arduino. Laser Module - Green - COM-09906. Mini Photocell - SEN-09088. Motors 1. Introduction Small DC motors can take little current but they normally can’t be driven directly from the output pin of an Arduino or any other embedded processor. 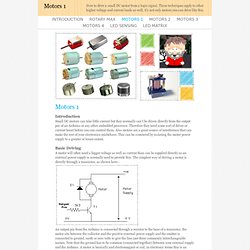 Therefore they need some sort of driver or current boost before you can control them. Also motors are a great source of interference that can make the rest of your electronics misbehave. This can be countered by isolating the motor power supply to a greater or lesser extent. Basic Driving A motor will often need a bigger voltage as well as current than can be supplied directly so an external power supply is normally used to provide this. An output pin from the Arduino is connected through a resistor to the base of a transistor, the motor sits between the collector and the positive external power supply and the emitter is connected to ground, earth or zero volts to give the line just three commonly interchangeable names.

Here two transistors have been used in a configuration known as a Darlington pair. Optical Isolation. How to Connect Laser Modules with Arduino. You might have to put a diffuser over the sensor as the light from the laser might be too small to affect this bulk sensor.How are you going to cope with ambient light changes? 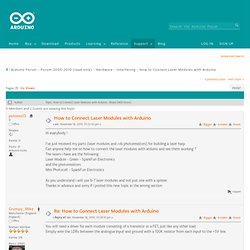 Previous advice on resistor value still valid. Sorry Mike but i don't understand what you mean...What exactly is a diffuser and why needed to put one on the photoresistor ? To test this LCD circuit connect it to an analog input of the arduino and read that to see what values you are getting. It might be that there is not enough voltage swing to switch between digital levels.I would start with a 10K resistor And also here don't understand what you mean.Sorry for not understanding some things (many things) but i m completely amateur. I also found this schematic from another laser harp project and i am confused.As you see they have put the resistor on gnd and the 5v connected it directly to the photoresistor. They made something like this unless i understand it wrong. 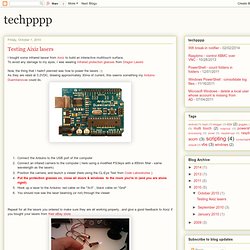 To avoid any damage to my eyes, I was wearing Infrared protection glasses from Dragon Lasers Now, the thing that I hadn't planned was how to power the lasers :-) As they are rated at 3.2VDC, drawing approximately 30ma of current, this seems something my Arduino Duemilanovae could do. Connect the Arduino to the USB port of the computerConnect an infared camera to the computer ( here using a modified PS3eye with a 850nm filter - same wavelength as the lasers)Position the camera, and launch a viewer (here using the CL-Eye Test from Code Laboratories )Put the protection glasses on, close all doors & windows to the room you're in (and you are alone right!)

Hook up a laser to the Arduino: red cable on the "3v3" , black cable on "Gnd"You should now see the laser beaming (or not) through the viewer. Arduino Laser Cannon. This is a somewhat incomplete article, contact me if you need help: russ_hensel. 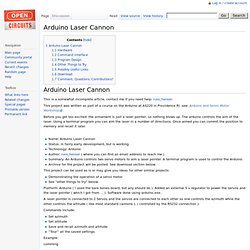 This project was written as part of a course on the Arduino at AS220 in Providence RI. see: Arduino and Servo Motor Workshop Before you get too excited: the armament is just a laser pointer, so nothing blows up. The arduino controls the aim of the laser. Using a terminal program you can aim the laser in a number of directions. DIY pillbox laser projector.