Author N K Jemisin. Mass Effect: Andromeda will star a younger, untested band of heroes. It's all about the journey In the Mass Effect trilogy, Commander Shepard was already a hero. 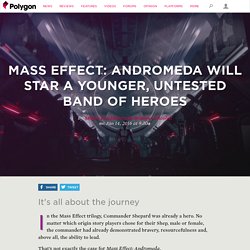 No matter which origin story players chose for their Shep, male or female, the commander had already demonstrated bravery, resourcefulness and, above all, the ability to lead. That's not exactly the case for Mass Effect: Andromeda. "This is a story about becoming a hero," creative director Mac Walters told Polygon at E3. "What are you doing here? The details of Mass Effect: Andromeda, the next entry in BioWare's ambitious, space opera-esque series, have largely remained obscure. Walters, referencing the trailer shown, had one big thing to point out: a younger cast of characters seen on-screen.

Strangers in a strange land "We've probably all experienced at one point in time where we kind of felt like a fish out of water," Walters said. In the Mass Effect universe, that concept is pushed to the nth degree. "People are kind of looking at you and going, 'Well, who are you and what are you doing here? '" Random Mods~ Mass Effect 3 - Cullen Mod - xXFreakyUnderworldXx's Sta.sh. Hello evryone who wants to use this Little mod! 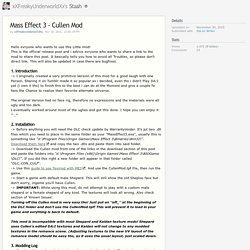 This is the official release post and i advice evryone who wants to share a link to the mod to share this post. It basically tells you how to avoid all Troubles, so please don't direct link. This will also be updated in case there are bugfixes. 1. Introduction -> I originally created a very primitive Version of this mod for a good laugh with one Person. The original Version had no face rig, therefore no expressions and the materials were all ugly and too dark.I eventually worked around most of the uglies and got this done. 2.

-> Before anything you will need the DLC check update by WarrantyVoider. Art'n Stuff. I'm Out of Evens. Mass Effect 1 Planetary Orbits (4K Resolution taken from the wiki) Mass Effect Trilogy: ME2 doesn't start with Origin after install - Page 3 - Answer HQ. Puh!!! 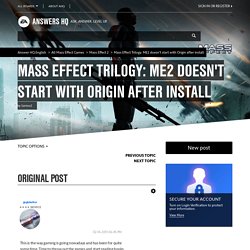 I finaly found something that worked for me, and I have tested all you suggestion that is stated before in this forum see this the long version. Her the short one, and it is a copy and paste, (the folder may difer because of vesion of Windows you use): "Some people are having have trouble running the config utility, ie. it always crashes. There's a work around which duplicates the copy function, Check out copy/paste job: If the ME1 save doesn't appear, relax, its just in another folder that ME2 can't see. Addicted to Mass Effect.

Christmas sofa - T'sovik by Sorceress-Nadira on DeviantArt. The Art Of Gaming. Designing an Alien Race: The Turian (plus intro) Save Game's Mass Effect Squadmate cocktails: The best drinks this side of the Citadel - Save Game. It’s been a few months since the release of Mass Effect 3. 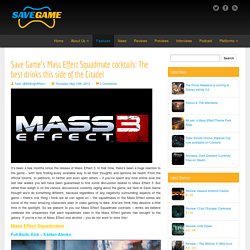 In that time, there’s been a huge reaction to the game – with fans finding every available way to let their thoughts and opinions be heard. From the official forums, to petitions, to twitter and even open letters – if you’ve spent any time online over the last few weeks you will have been guaranteed to find some discussion related to Mass Effect 3. But rather than weigh in on the various discussions currently raging about the game, we here at Save Game thought we’d do something different, because regardless of any negativity surrounding aspects of the game – there’s one thing I think we all can agree on – the squadmates in the Mass Effect series are some of the most amazing characters seen in video gaming to date. And we think they deserve a little time in the spotlight. Cerberus Daily News - January 2010 - Mass Effect Wiki - Mass Effect, Mass Effect 2, Mass Effect 3, walkthroughs and more. - Wikia. Cerberus Daily News delivers daily news about the Mass Effect universe via the Cerberus Network. 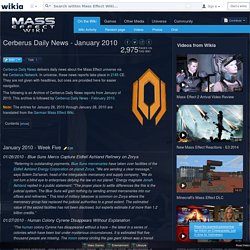 In universe, these news reports take place in 2185 CE. They are not given with headlines, but ones are provided here for easier navigation. The following is an Archive of Cerberus Daily News reports from January of 2010. Mass Effect Retrospective 1: The Ages of BioWare. For the last few years I’ve half-jokingly suggested that there is no upper limit on how much people are willing to discuss the Mass Effect games. 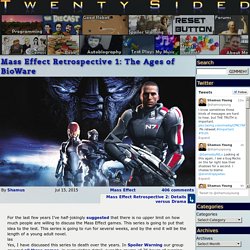 This series is going to put that idea to the test. This series is going to run for several weeks, and by the end it will be the length of a young adult novel. las Yes, I have discussed this series to death over the years. In Spoiler Warning our group covered all three games, in excruciating detail, over the course of 36 hours of running commentary. You’d think there would be nothing left to say at this point. But we played and commented on those games in their time. Mass Effect 3 Console Commands ME3. Stuff goes in the stuff.: Modder Resource: UPK files for ME3Explorer Mesh Import. I should go. Mass Effect 2 Downloads, Hints & Cheats. 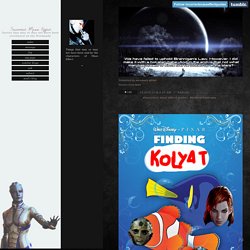 Trying not to be rude or anything, but I did fly from Australia to the UK less than a week ago. Jabberwockyx: Shepard might not be the best person to talk to when you’re in the hospital. Hello? Hello! Thanks to everyone who mailed me; wifi hasn’t been so good in the hostel but my parents actually have pretty decent good stuff (ha!) Do you ever make posts with maleshep or is it usually femshep?

We do use Maleshep yes, though mostly use Femshep and this is why. Mass Effect / Drinking Game. Trope Media Tropers Online: 3,498 Resources Troperville. 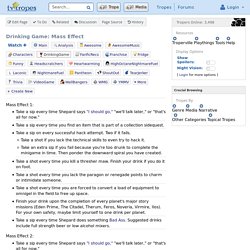 Imgur. Calibrations: A Love Song. Tonight I needed to put myself in a better, mood, so I wrote a dorky little fansong about Garrus. 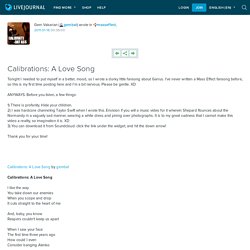 I've never written a Mass Effect fansong before, so this is my first time posting here and I'm a bit nervous. Please be gentle. AdiBPrO.jpg (JPEG Image, 1049 × 550 pixels) - Scaled (97%) Interview with Mass Effect Lead Writer Mac Walters. By Lui Galletto exclusive Ever since its release in 2007, BioWare's Mass Effect trilogy has set the standard for deep, evocative storylines and helped to change the way we view video games as storytelling medium. 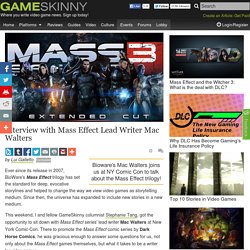 Since then, the universe has expanded to include new stories in a new medium. This weekend, I and fellow GameSkinny columnist Stephanie Tang, got the opportunity to sit down with Mass Effect series' lead writer Mac Walters at New York Comic-Con. There to promote the Mass Effect comic series by Dark Horse Comics, he was gracious enough to answer some questions for us, not only about the Mass Effect games themselves, but what it takes to be a writer for video games. How did you get into this line of work? I always loved writing, but when I was younger I played a game made by Brian Fargo, and I remember reading a little blurb he wrote about creating the game, and that sparked something in me. Tali Romance Photo at Mass Effect 3 Nexus. I was never satisfied whatsoever with the default picture of Tali, however I didn't hate the idea of it, so I searched and searched until I found something I thought was more desirable, then I made a mod for it.

Installation (.mod):1) You will need to download ME3 Explorer (Here: or the SVN (Better Option))2) Backup this file (BIOGameCookedPCConsoleBioD_Nor_100Cabin.pcc)3) Run ME3 Explorer, select "Mod Maker" from "Tools" tab.4) Click "FileLoad Jobs" then select "Tali-Photo-kevlo.mod" from wherever you saved it.5) Double click on the mod, run it, if it asks you to update anything, click yes. Installtion (.zip):If you use this one you should know what to do, if you don't, use the .mod file. Credit:This mod is based purely off of the artist brinx-II's picture here ( All credit goes to him for his wonderful art, not to me, I just compiled it into a mod file.

Don't steal it, if you use it in anything give brinx-II his credit. This was actually how BioWare envisioned Tali's face (at the time of ME2?), wasn't it? So Bioware did the awful thing to actually reveal... Mass Effect: Deception (Rage Comic - Album on Imgur. The Final Hours of Mass Effect 3. Mass Effect by lyutor1945 on DeviantArt. My ideal perfect Shepard after a few hours of modding and tweaking. What do you guys think? : masseffect. Mass Effect Hype Train is a go. Her Tongue Tells Tales Of Rebellion. Ars sits down with BioWare to talk about Mass Effect: Andromeda. Electronic Arts’ E3 press conference kicked off with something that fans were hoping to see: a teaser-trailer for the new Mass Effect title, Mass Effect: Andromeda, set to the wavering baritone of Johnny Cash’s "(Ghost) Riders in the Sky.

" At about the same time as the EA event, BioWare posted a blog entry with a few new details on the game: you can play a male or female character, it’s set in a galaxy far, far away—literally, hence "Andromeda"—and the expected release date is near the end of 2016. But we’re hungry for more details on the new game, which BioWare has teased for more than a year now. We got a chance to sit down with BioWare Montreal studio manager Aaryn Flynn and creative director Mac Walters over some hotel bar snacks and pump them—politely but insistently—for anything they’d be willing to tell us. Mass Effect: Andromeda pictures - Album on Imgur. Last Month I Took a Random Survey About Mass Effect 4. Here Is What I Found Out : masseffect. Mass Effect 2-3 Screenshots. Mass Effect: The Q&A For Hardcore Fans - News - www.GameInformer.com. Tumblr user totalspiffage. Garrus Vakarian. Garrus, voiced by Brandon Keener, is a male Turian who becomes a member of Shepard's party in the sci-fi RPG Mass Effect.

Garrus was running the investigation into the motives of the Council Spectre named Saren, Captain Anderson and Ambassador Udina accused Saren of masterminding the attack on Eden Prime. Garrus agrees to join Shepard as a way to continue his investigation after C-Sec shuts it down due to the allotted time given for investigation expiring and lack of conclusive evidence. Prior to joining Commander Shepard's crew, Garrus worked for the Citadel Security Force, commonly abreviated as "C-Sec".

His father, who was also a C-Sec agent, was his primary influence in joining though it is possible Garrus has some degree of weapons and military training prior to his career at C-Sec, due to Turian traditions of National Service. While working with C-Sec, he developed a strong hatred for rules and regulations which interfere with the bringing of justice to the criminal. Tali'Zorah nar Rayya screenshots, images and pictures. Sad Mordin by Mabiruna on DeviantArt. Mass Effect 2 Suicide Mission Survival Calculator - Page 6 - Story, Campaign & Characters.

Talking to VGS , Karpyshyn details the ending, which he admits wasn't "super fleshed out". The plot would have revolved around Dark Energy: something that was mentioned in Mass Effect 2, but never expanded upon. "Dark Energy was something that only organics could access because of various techno-science magic reasons we hadn't decided on yet," Karpyshyn said. "Maybe the Reapers kept wiping out organic life because organics keep evolving to the state where they would use biotics and dark energy and that caused an entropic effect that would hasten the end of the universe.