Sexism in a democratic society

South Africa with its history of apartheid has left a legacy where men continue to dominate, one race over the other as well as male over female. These ideologies continue to perpetuate itself in institutions across South Africa.

This superiority over another person or group continues to make working environments unpleasant. Society has always portrayed male figures as leaders. It was thought off that men had the necessary character traits for leadership. Historically, a woman was not placed in positions of influence and often performed menial tasks. With the advent of democracy, progress has been made in addressing inequalities in society. However, much more needs to be done. South Africa's Constitution is one of the most progressive in the world. Yet, the manner in which females are being treated doesn't mirror the values enshrined in the constitution. These poses are major challenge for women and their career advancement.
Gender stereotyping of the managerial position has been offered as one possible explanation for the proverbial glass ceiling women encounter in their managerial career mobility (Schein, 2001 ). The race is also a differentiating factor positioning women in different ways (Bell and Nkomo,2001). Black women's standpoint is unique in South Africa due to the disadvantaged position once occupied due to race and gender.

The origins of sexism: How men came to rule 12,000 years ago. By Anil Ananthaswamy and Kate Douglas THE vast majority of cultures are patriarchies, where men are more likely than women to hold positions of social, economic and political power.

So it is tempting to assume that this is the natural state of affairs, perhaps because men are, on average, stronger than women. But a study of humanity’s roots suggests this answer is too simple. Images (1)

Historically both women and men where associated with specific gender roles. Gender stereotypes refer to beliefs held about the characteristics of male and females. The image identifies a woman as someone who is confined to household tasks such as cleaning whilst the man attended to cleaning the car. This practice is rooted in a patriarchal society. – vishaan

Women cannot be confined to cooking and baking. Society at large shouldn't expect women to conform to this image! – vishaan

Img. The brains of men and women aren’t really that different, study finds. In the mid-19th century, researchers claimed they could tell the sex of an individual just by looking at their disembodied brain. 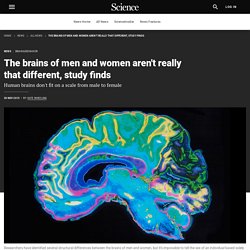 But a new study finds that human brains do not fit neatly into “male” and “female” categories. Indeed, all of our brains seem to share a patchwork of forms; some that are more common in males, others that are more common in females, and some that are common to both. The findings could change how scientists study the brain and even how society defines gender. “Nobody has had a way of quantifying this before,” says Lise Eliot, a neuroscientist at Chicago Medical School in Illinois who was not involved in the study.

“Everything they’ve done here is new.” As soon as scientists could image the brain, they began hunting for sex differences. Sexism in sport 3 638.

Sexism in sport is a deep-rooted problem and reminds us of the inequalities that exist between males and females. Although sport amongst women has grown there are still huge disparities that exist. For example, The men’s decathlon has been contested at every Olympics since 1912 but there is still no place at major championships for the women’s event. – vishaan

Images. Everyday Sexism: Laura Bates at TEDxCoventGardenWomen. The everyday sexism project. Misogyny And Sexism Often Start Young And That Is Why The School Systems Need Change. Changes that may ensure that a more gender inclusive and sensitive culture exists, where a child does not grow up with a sense of entitlement and toxic power.

Misogyny is the hatred of, contempt for, or prejudice against women or girls. It enforces sexism by punishing those who reject an inferior status for women and rewarding those who accept it. Misogyny manifests in numerous ways, including social exclusion, sex discrimination, hostility, androcentrism, patriarchy, male privilege, belittling of women, disenfranchisement of women, violence against women, and sexual objectification. Misogyny functions as an ideology or belief system that has accompanied patriarchal, or male-dominated societies for thousands of years and continues to place women in subordinate positions with limited access to power and decision making (Flood,2007). – vishaan

The Nirbhaya case verdict against the four convicts made me introspect a lot.

While the entire nation celebrated, I had mixed thoughts and a lot of questions to ponder upon. Was I supposed to be satisfied that it took more than seven years for the final verdict and even then, one criminal still roamed around, scot-free? As society, are we trying to numb the sharp and painful jibes of rape and gender violence by categorising Nirbhaya’s case as the rarest of the rarest? Do we not consider all rapes as rarest? Aren’t they all equally heinous? I still remember what my driver told me about what he felt about the rape of Hyderabad doctor last year. Have we normalised rape and consider a case an extreme one only when the victim is killed? We need to ask ourselves these questions Next, I would move to systemic changes required.

Punishments. Wikigender webinar: Addressing gender stereotypes in the classroom. “Sexism is a problem in every school. Now we must take action”, by Sally Thomas : Worlds of Education. In December last year, the National Education Union and UK Feminista launched a ground-breaking report on sexism in schools: “It’s Just Everywhere”[1].

Sexism survey feminista 2017. A primary school teacher talking about sexism in the ... Why We Must Dismantle Sexism In South Africa’s All-Boy Schools - Warren Chalklen, Ph.D. During my student tenure in a semi-private all-boy high school in Johannesburg, a handful of teachers and students pushed back against sexism, and many educated us about the dangers of unchecked masculinity. 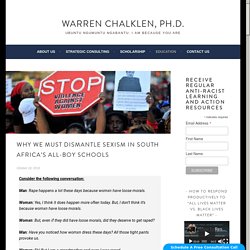 However, when we boys grouped together, we bonded through displays of sexual dominance and expressed attitudes similar to the men in the above conversation. The physical school space itself did not foster patriarchy, although certain spaces such as locker rooms and hostels certainly did, but rather our acceptance of patriarchal actions strengthened its existence. All-boy schools are capable of, and do, nurture oppressive culture. South Africa is the most unsafe place for womxn on earth.