All You Should Know About HMDs. Head mounted display signifies wearable computer displays. 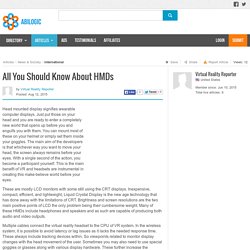 Just put those on your head and you are ready to enter a completely new world that opens up before you and engulfs you with them. You can mount most of these on your helmet or simply set them inside your goggles. The main aim of the developers is that whichever way you want to move your head, the screen always remains before your eyes. With a single second of the action, you become a participant yourself. This is the main benefit of VR and headsets are instrumental in creating this make-believe world before your eyes. These are mostly LCD monitors with some still using the CRT displays. Oculus Headsets Make VR Gaming A Reality. Expectations of people from Oculus Rift have always been quite expansive right from the day of its launch in 2011. 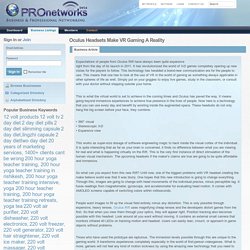 3D gaming systems which the late gamers control their in-game avatars with body movement, are one of the most hyped trends in the world of virtual reality games and with availability of gadgets like Morpheus from Sony or Samsung Gear VR gamers from all over the world, one can certainly expect for more exciting times. 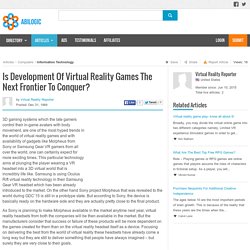 This particular technology aims at plunging the player wearing a VR headset into a 3D virtual world that is incredibly life like. Samsung is using Oculus Rift virtual reality technology in their Samsung Gear VR headset which has been already introduced to the market. On the other hand Sony project Morpheus that was revealed to the world during GDC’15 is still in a prototype state. But according to Sony, the device is basically ready on the hardware side and they are actually pretty close to the final product. How Virtual Reality Is Turning Into Reality With Samsung Gear VR. Can you imagine bubbles floating in front of your eyes with cool information about everything you see around you? 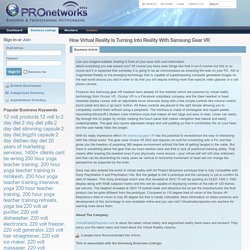 Of course you have seen things like that in sci-fi movies but this is no movie and it is expected that someday it is going to be as commonplace as browsing the web on your PC. AR or Augmented Reality is the emerging technology that is capable of superimposing computer generated images on the real world around you and in order to do that you will require nothing more than special video glasses or a cell phone camera.

Do you think that virtual reality games are the only application of this exciting technology, which has enabled people to create brand new realities? 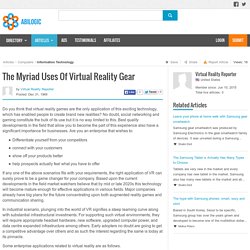 No doubt, social networking and gaming constitute the bulk of its use but it is no way limited to this. Best quality developments in the field that allow you to become the part of this experience also have a significant importance for businesses. Are you an enterprise that wishes to: Differentiate yourself from your competitors connect with your customers show off your products better help prospects actually feel what you have to offer. Virtual Reality-The Latest Craze In The Gaming Industry. The interest of the gamers change according to the availability of the new technologies and the latest one to capture their imagination is the virtual reality. 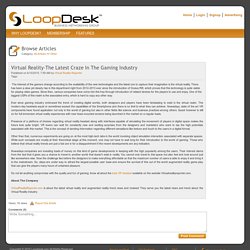 There has been a slow yet steady rise in this department right from 2012-2013 ever since the introduction of Oculus Rift, which proves that this technology is quite viable for playing video games. Since then, various companies have come into this fray through introduction of related devices for the players to use and enjoy. One of the biggest USPs of this realm is the associated entry, which is hard to copy any other way. Ever since gaming industry embraced the trend of creating digital worlds, both designers and players have been fantasizing to exist in the virtual realm. The modern-day headsets equal or sometimes exceed the capabilities of the Smartphone and there is no limit to what they can achieve. 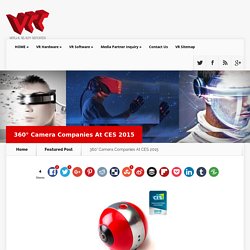 At CES this year, we did witness a huge rise in VR peripheral companies as VR hardware become increasingly commercialized. Of which, 360-degree camera becomes a necessity to produce VR content. Traditionally, making 360° videos requires a 360-degree camera rig, 6~12 Gopro camera, and the video stitching software. The whole setup could be very expensive. Samsung announced Project Beyond, a 360-degree camera that generates 360-degree images for the VR goggles. 360-degree Cameras Realtime Immersion Realtime Immersion (RTI) is a company that specializes in capturing and streaming live 360° content with their proprietary camera. Unlike most 360° camera, RTI camera does not require sticking separate frames together.

So consider RTI as a potential solution provider, if you ever have a need to hire a 360-degree video production company. Price : $349USD. Virtual Reality Reporter - Virtual Reality Games. ADR1FT: Epic Space Survival Game In First Person ADR1FT: A Deep Space Adventrue By Three One Zero ADR1FT is a single-player and first-person space themed gaming experience due to release in summer of 2015. 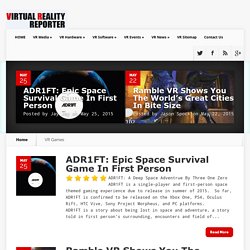 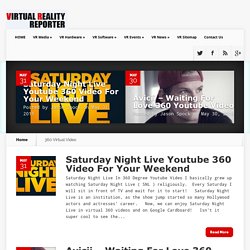 Every Saturday I will sit in front of TV and wait for it to start! Saturday Night Live is an institution, as the show jump started so many Hollywood actors and actresses’ career. Sony Project Morpheus - Virtual Reality Reporter. Sony Project Morpheus as made a bold move and made a huge announcement during GDC 2015, which took place at Moscone Center, San Francisco earlier this month. 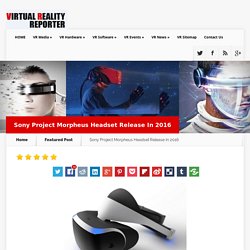 Shuhei Yoshida, President of Sony Computer Entertainment announced the headset will release in the first half of 2016. Yoshida shows Morpheus prototype at GDC 2014 A surprise gift was given to GDC 2015 attendees. Each attendee received a Sony Project Morpheus Cardboard Edition hmd, as shown below in Synthesis Universe’s Tweet: Sony understands the power of Social Media, hence the freebie @ GDC 2015 Sony Project Morpheus has always been mysterious project since the beginning, we don’t hear much about it since GDC 2014.

Due to elementary graphic and poor support, Virtual Boy was a failure. Virtual Reality Reporter – Samsung Gear VR. Samsung Gear VR is ahead of its competition! While major players in the VR industry is still on their way to release a commercial VR device, Samsung’s Gear VR HMD powered by Oculus just released a second version with enhanced power efficiency and overall performance. The new Samsung Gear VR headset is simpler and 15% smaller than the first version. The ergonomic redesigned strap supposed to make the new Gear VR to fit more comfortably. On the right you have the track-pad, the back button, and the volume switch same as the previous version.

Here we handpicked some of our favorite funniest reaction of people having their virgin VR experiences. Augmented Reality News At Virtual Reality Reporter. Apple is making moves to enter the virtual reality industry! Since the death of the Google Glass, we are witnessing a number of companies enter into the AR space. Sony revealed their latest SmartEyeGlass at CES this year, as well as a few other companies such as ODG, Vuzix, Daqri, Epson Moverio, and Seebright. Microsoft earlier this year announced that their augmented reality device, HoloLens, would be released sometime during the Windows 10 timeframe.

Virtual Reality Reporter had a chance to try on Sony’s SmartEyeGlass at CES, and frankly did not impress us over its wired bulky design. Soon after Sony released their SmartEyeGlass promo video on YouTube resulted far more dislikes than likes. We all know Apple is known for creating great products that people would crave for, and it is apparently that they do not want to fall behind the exploding AR bandwagon. Virtual Reality Reporter For VR News & Reviews.