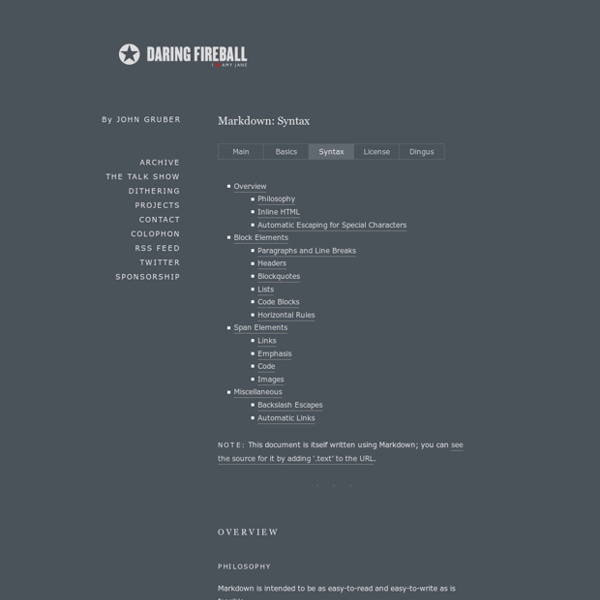 Note: This document is itself written using Markdown; you can see the source for it by adding ‘.text’ to the URL. Overview Philosophy Markdown is intended to be as easy-to-read and easy-to-write as is feasible. Readability, however, is emphasized above all else. A Markdown-formatted document should be publishable as-is, as plain text, without looking like it’s been marked up with tags or formatting instructions. To this end, Markdown’s syntax is comprised entirely of punctuation characters, which punctuation characters have been carefully chosen so as to look like what they mean. Inline HTML Markdown’s syntax is intended for one purpose: to be used as a format for writing for the web. Markdown is not a replacement for HTML, or even close to it. For any markup that is not covered by Markdown’s syntax, you simply use HTML itself. The only restrictions are that block-level HTML elements — e.g. For example, to add an HTML table to a Markdown article: This is a regular paragraph. &copy; 4 &lt; 5 1.

Update the IDE and SDK Tools   Once you install Android Studio, it's easy to keep the Android Studio IDE and Android SDK tools up to date with automatic updates and the Android SDK Manager. Update your IDE and change channels Android Studio notifies you with a small bubble dialog when an update is available for the IDE, but you can manually check for updates by clicking Help > Check for Update (on Mac, Android Studio > Check for Updates). Learning AutoHotKey – Simplifying The Idea of Hotkeys and HotStrings For a first-time user, AutoHotkey can be an intimidating experience. While its benefits in saving time and preventing RSI are undeniable, the general first reaction from users is “Hey.. I am not a programmer.. Design Patterns — A quick guide to Singleton pattern. Step 1 — Keywords Defining keywords is the secret recipe in this series of quick-guides. This method helped me truly understand the design patterns, hardcode them in my mind and comprehend the differences among other design patterns. This time the keywords take us a trip back to basics.

Lamy Safari Fountain Pen Review First Review of my First Pen In the first post I told you about the pen that started it all. Well, this is the pen, and this is the review. I thought it fitting to make this the first pen I write about! The Safari should be nothing new to most people, but in case you’re a newbie (welcome!) or have simply forgotten (for shame!) Why your first programming language doesn't really matter This device is unable to play the requested video. There's a lot of snobbery about first programming languages and how the wrong choice can forever saddle developers with bad habits. This censorious attitude stretches back to the 1970s, when the father of computer science, Edsger Dijkstra, suggested that developers who learned BASIC had been "mentally mutilated beyond hope of regeneration". Half a century later the languages may be different, but the willingness to admonish learners for cutting their teeth on "lesser" programming languages remains. Today, it is JavaScript that is often a bête noire for those policing learning. SEE: Hiring kit: Python developer (Tech Pro Research)

Calligraphy and Handwriting Books Given that Vance Studley’s Left-Handed Calligraphy was originally published in 1979, at the exact time I was in third grade and supposed to be learning cursive writing, I was immediately intrigued. I say supposed to be learning cursive because I went to three different schools that year and never had good instruction from beginning to end. Mrs. Tarbell at St. Therese Academy, the third of my third grade schools, worked with me and I received a “Most Improved Handwriting” award for the effort. Pretty proud of that one at the time and I still have the certificate in a scrapbook. Which programming languages are most popular (and what does that even mean)? This device is unable to play the requested video. My UC Berkeley programming students often ask me which programming language is the most popular. It's a simple question with a far-from-simple answer. Let's start with why people want to know. Usually, at least when it comes to students, they ask which language is the most popular because they want to learn subjects where there are jobs. For most people, it makes very little sense to enter a field with knowledge about something that's not in demand.

The world's most popular programming language is JavaScript, but why? This device is unable to play the requested video. While Python regularly polls as the fastest-growing language, JavaScript is consistently the most popular. Much of the work done using JavaScript still seems to be carried out by front-end web developers, despite the language finding new uses in areas such as back-end development in recent years. Now the code repository service GitHub has shed further light on what's fuelling the continued popularity of JavaScript, as part of a round-up of which technologies spawned the most new open-source projects on GitHub in 2018. SEE: Hiring kit: JavaScript developer (Tech Pro Research) Three JavaScript-related technologies made it into GitHub's list of the "non-language topics" associated with highest number of new open-source projects last year.