The United Herbal Archives. Magickal Uses of Herbs A-G. The Magickal Properties of Herbs Since most herbs are known by many folk names, use your Find command to find specific herbs on this page. 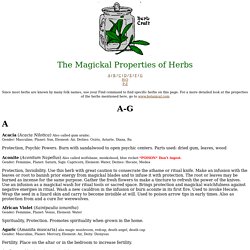 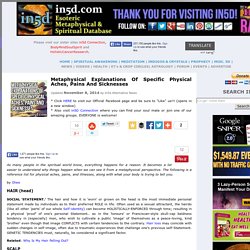 (opens in a new window) * Also visit in5D Connection where you can find your soul mate or join one of our amazing groups. EVERYONE is welcome! As many people in the spiritual world know, everything happens for a reason. By Olwe HAIR (head) SOCIAL 'STATEMENT.' Related: Why Is My Hair Falling Out? SPIRITUAL SENSITIVITY. SOCIAL SENSITIVITY. The secret ways women used pot throughout history. Ever wondered what it would feel like to slather a mixture of lamb’s fat and cannabis all over your naked body? 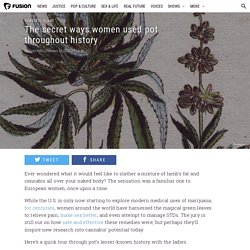 The sensation was a familiar one to European women, once upon a time. While the U.S. is only now starting to explore modern medical uses of marijuana, for centuries, women around the world have harnessed the magical green leaves to relieve pain, make sex better, and even attempt to manage STDs. The jury is still out on how safe and effective these remedies were, but perhaps they’ll inspire new research into cannabis’ potential today. Here’s a quick tour through pot’s lesser-known history with the ladies. Women rubbed pot on swollen breasts.

Weed has been used as a topical treatment for centuries. Tantric sex disciples drank pot ‘milkshakes.’ From about the seventh century onward, the use of cannabis became widespread in Indian tantric sex practices. Doctors prescribed pot for STDs. In the late seventeenth century, a German physician declared cannabis a remedy for gonorrhea. Common Herbs used with spell craft. Herbs in Mythology. Myths and Legends About Herbs and Spices. There are two kinds of cinnamon. 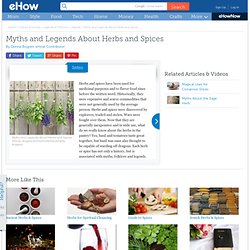 Cinnamomum zeylanicum is called true cinnamon and is native to Sri Lanka, formerly Ceylon. The other is from the cassia tree, which grows in Vietnam, China, Indonesia and Central America. This is the cinnamon used in North America. It is more bitter than Ceylon cinnamon. Herbs in Myths and Legends. Native American Indian Herb Legends, Meaning and Symbolism from the Myths of Many Tribes. The mythology of plants and herbs. If you look in your kitchen cupboard it is very likely that you will find small jars or packets of herbs which you probably add to food to give it extra flavouring. 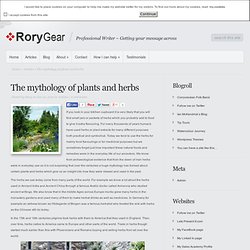 For many thousands of years humans have used herbs or plant extracts for many different purposes both practical and symbolical. Today we tend to use the herbs for mainly food flavourings or for medicinal purposes but we sometimes forget just how important these natural foods and remedies were in the everyday life of our ancestors. We know from archaeological evidence that from the dawn of man herbs were in everyday use so it is not surprising that over the centuries a huge mythology has formed about certain plants and herbs which give us an insight into how they were viewed and used in the past. The herbs we use today come from many parts of the world. For example we know a lot about the herbs used in Ancient India and Ancient China through a famous Arabic doctor called Avicenna who studied ancient writings. Magical Herbs Archives - The Practical Herbalist. Strawberry History, Folklore, Myth and Magic Although strawberries have only relatively recently been cultivated in Europe and western cultures, beginning around 1300 C. 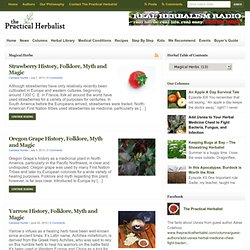 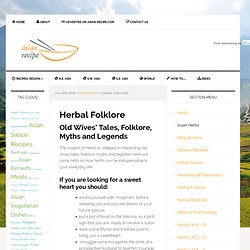 Here are some hints on how herbs can be indispensable in your everyday life. If you are looking for a sweet heart you should: anoint yourself with marjoram before sleeping you and you will dream of your future spouseput a pot of basil on the balcony as a tacit sign that you are ready to receive a suitorwear some thyme and it will be sure to bring you a sweetheart smuggle some borageinto the drink of a prospective husband to give him courage to propose marriagewear some lovage to assure your sweetheart’s undying devotion OK… you’ve snagged him/her and you are married……. Plant some sage (and hope it grows/doesn’t grow) because sage only prospers where the wife rulesWhoever has a better vocabulary of cuss words let him/her plant the basil…because it will only grow if cussed out properly If you are having trouble in the bedroom: If you want to keep from growing old:

Herbs. List Of Herbs. Herb History and Folklore. Bestselling author. Step back in time with Maitland's Dark Tales Brambles We may not think of blackberry brambles as a medicinal herb, but they did in medieval times. 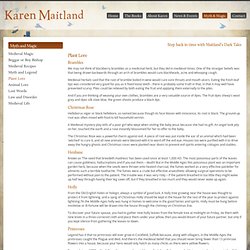 One of the stranger beliefs was that being drawn backwards through an arch of brambles would cure blackheads, acne and whooping cough. Medieval herbals said that the root of bramble boiled in wine would cure sore throats and mouth ulcers. Eating the fresh leaf tips was considered very good for you as it fixed loose teeth - there is probably some truth in that, in that it may well have prevented scurvy. Al_Selden_Leif_-_Pagan_Herbs_by_Use_cd6_id1571401751_size131. Richard_Alan_Miller_-_The_Magical_And_Ritual_Use_Of_Herbs_id1110609770_size3498. Encyclopedia of Magical Herbs - Scott Cunningham. Wiccan - E-Book - Herbs and their Magical Properties (Witch Craft, Occult, Druid, Magick, Spells) Crow_William_Bernard_-_The_Occult_Properties_of_Herbs_and_Plants. Wicca herb chart Wiccan herbal correspondences for Wicca herbs. Why Herbs Are Used In Magick? 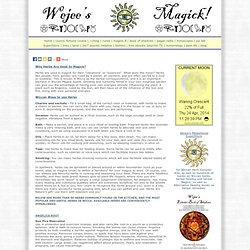 Herbs are used in magick for their "vibrations" or "essences". What does this mean? Herbs, like people, have gender, are ruled by a planet, an element, and are often sacred to a God or Goddess. This is known in Wicca as the herbal correspondence, and it is an important element in Wiccan Magick Spells. Growing and nurturing herbs in your own magickal garden can give you the advantage of having your own energies already influencing the plant.

Wiccan Ways to use Herbs Charms and sachets - Fill a small bag, of the correct color or material, with herbs to make a charm or sachet. Incense- Herbs can be burned as a ritual incense, such as the sage smudge used to clear negative vibrations from a space.