Learn Mobile App Development with Ionic Framework: vernonemrit. Course Description: - Hybrids are changing the way we build apps, breaking the more rigid structures and making it easier to focus on the building aspect of apps. 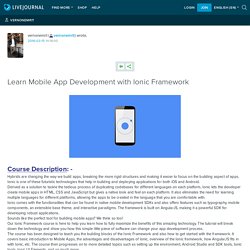 Ionic is one of these futuristic technologies that help in building and deploying applications for both iOS and Android. Derived as a solution to tackle the tedious process of duplicating codebases for different languages on each platform, Ionic lets the developer create mobile apps in HTML, CSS and JavaScript but gives a native look and feel on each platform. It also eliminates the need for learning multiple languages for different platforms, allowing the apps to be created in the language that you are comfortable with. Ionic comes with the functionalities that can be found in native mobile development SDKs and also offers features such as typography, mobile components, an extensible base theme, and interactive paradigms. Sounds like the perfect tool for building mobile apps? Learn to Build Apps for Apple WatchOS: vernonemrit. Course Description: - Technology is constantly changing at a rapid pace, with trends now shifting from having the technology in the user’s hands to putting in on the user’s wrist. 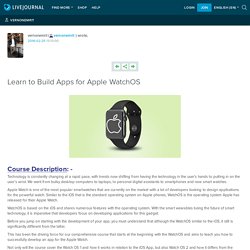 We went from bulky desktop computers to laptops, to personal digital assistants to smartphones and now smart watches. Apple Watch is one of the most popular smartwatches that are currently on the market with a lot of developers looking to design applications for the powerful watch. Similar to the iOS that is the standard operating system on Apple phones, WatchOS is the operating system Apple has released for their Apple Watch. WatchOS is based on the iOS and shares numerous features with the operating system. Before you jump on starting with the development of your app, you must understand that although the WatchOS similar to the iOS, it still is significantly different from the latter. Learn Android Programming & Android App Development Online. 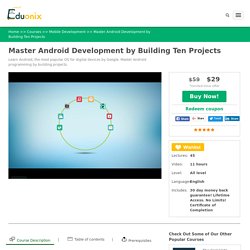 With Google investing heavily in taking Android to every nook and corner of the globe it is set to enter the next big phase of growth. This versatile technology is also powering wearable devices and cameras . With its exceptional growth rate it provides ample options for developers with Android skills to cash on this opportunity of a lifetime. We here at Eduonix always work hard to create the most advance and best in its class training material. Android Lollipop Ultimate Tutorial for App Development: vernonemrit. Course Description: - The Ultimate Android App Development Course is here. 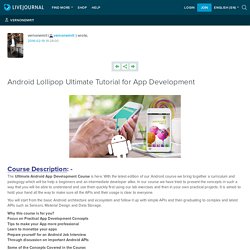 With the latest edition of our Android course we bring together a curriculum and pedagogy which will be help a beginners and an intermediate developer alike. In our course we have tried to present the concepts in such a way that you will be able to understand and use them quickly first using our lab exercises and then in your own practical projects. It is aimed to hold your hand all the way to make sure all the APIs and their usage is clear to everyone. You will start from the basic Android architecture and ecosystem and follow it up with simple APIs and then graduating to complex and latest APIs such as Sensors, Material Design and Data Storage. Why this course is for you? Learn to Build Mobile Games using Corona SDK: vernonemrit. Learn to Build Mobile Apps from Scratch: vernonemrit. Course Description: - Learn how to master various web technologies to create mobile apps that run on all of the major platforms - Android, iOS and Windows Phone - within this great course. 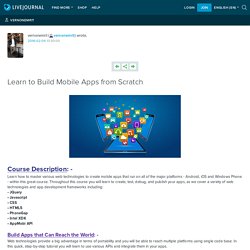 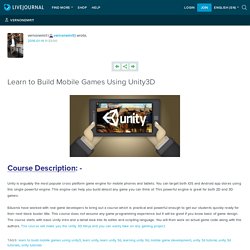 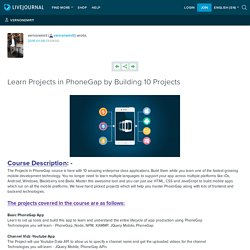 Build them while you learn one of the fastest growing mobile development technology. You no longer need to learn multiple languages to support your app across multiple platforms like iOs, Android, Windows, Blackberry and Bada. Master this awesome tool and you can just use HTML, CSS and JavaScript to build mobile apps which run on all the mobile platforms. We have hand picked projects which will help you master PhoenGap along with lots of frontend and backend technologies. The projects covered in the course are as follows: Basic PhoneGap App Learn to set up tools and build this app to learn and understand the entire lifecycle of app production using PhoneGapTechnologies you will learn - PhoneGap, Node, NPM, XAMMP, JQuery Mobile, PhoneGap Github Repo FinderInteract with Github API to get developer and repository contentTechnologies you will learn - HTMl, CSS, JavaScript and jQuery Mobile.

Build Apps with iOS9 Programming Language from Scratch: vernonemrit. Apple has made a huge impact in the market with innovations on its products. 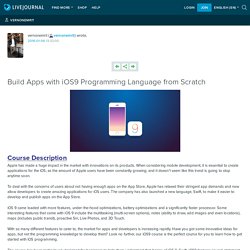 When considering mobile development, it is essential to create applications for the iOS, as the amount of Apple users have been constantly growing; and it doesn’t seem like this trend is going to stop anytime soon. To deal with the concerns of users about not having enough apps on the App Store, Apple has relaxed their stringent app demands and now allow developers to create amazing applications for iOS users. Learn to Build Apps with Android M from Ground Up: vernonemrit. Currently one of the most popular operating systems on the market, Google has created a huge market share for its Android platform. 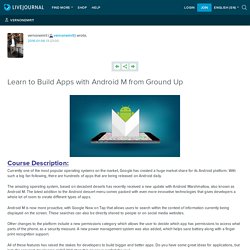 With such a big fan following, there are hundreds of apps that are being released on Android daily. The amazing operating system, based on decadent deserts has recently received a new update with Android Marshmallow, also known as Android M. The latest addition to the Android dessert menu comes packed with even more innovative technologies that gives developers a whole lot of room to create different types of apps. Android M is now more proactive, with Google Now on Tap that allows users to search within the context of information currently being displayed on the screen.

These searches can also be directly shared to people or on social media websites. Other changes to the platform include a new permissions category which allows the user to decide which app has permissions to access what parts of the phone, as a security measure. Learn iOS Apps Development Using Swift 2 : vernonemrit.