Neuralink Wants to Wire Your Brain to the Internet. The following essay is reprinted with permission from The Conversation, an online publication covering the latest research. 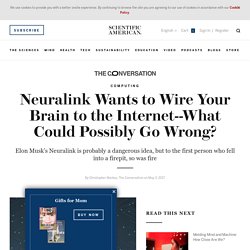 Neuralink – which is “developing ultra high bandwidth brain-machine interfaces to connect humans and computers” – is probably a bad idea. If you understand the science behind it, and that’s what you wanted to hear, you can stop reading. We Analyze 13 Hacks in the 1995 Movie ‘Hackers’ and How They Compare to Today. Hackers, the 1995 directed film by Iain Softley, celebrates the 20th anniversary of its release this week. 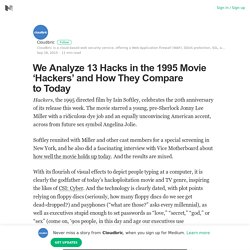 The movie starred a young, pre-Sherlock Jonny Lee Miller with a ridiculous dye job and an equally unconvincing American accent, across from future sex symbol Angelina Jolie. Softley reunited with Miller and other cast members for a special screening in New York, and he also did a fascinating interview with Vice Motherboard about how well the movie holds up today. And the results are mixed. With its flourish of visual effects to depict people typing at a computer, it is clearly the godfather of today’s hacksploitation movie and TV genre, inspiring the likes of CSI: Cyber. And the technology is clearly dated, with plot points relying on floppy discs (seriously, how many floppy discs do we see get dead-dropped?)

We Analyze 13 Hacks in the 1995 Movie ‘Hackers’ and How They Compare to Today. Hacker Typer. Commodore 64. PC Gaming info resource master list. What Are the 10 Greatest Inventions of Our Time? A competition sponsored in 1913 by Scientific American asked for essays on the 10 greatest inventions. 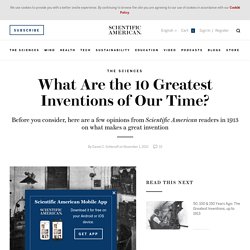 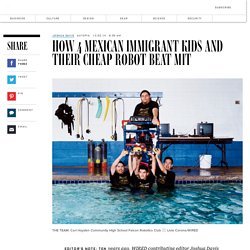 Google DeepMind's Deep Q-learning playing Atari Breakout. The Oracle of Bacon. Every couple of weeks the Oracle downloads several database files from one of the Internet Movie Database'sFTP sites containing around 2.9 million actors and actresses, around 1.9 million movies and TV shows, and around 400,000 nicknames. 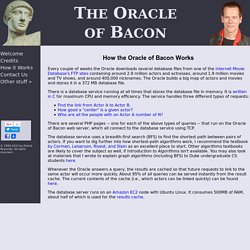 The Oracle builds a big map of actors and movies and stores it in a 372 MB database file. There is a database service running at all times that stores the database file in memory. It is written in C for maximum CPU and memory efficiency. The service handles three different types of requests: Scientists must act now to make artificial intelligence benign: Don Pittis. Reining in the growing power of artificial intelligence could be a matter of human survival. 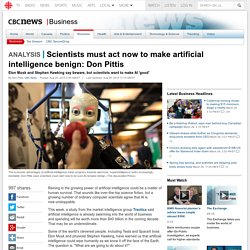 That sounds like over-the-top science fiction, but a growing number of ordinary computer scientists agree that AI is now unstoppable. This week, a study from the market intelligence group Tractica said artificial intelligence is already swarming into the world of business and spending will be worth more than $40 billion in the coming decade. That may be an underestimate. Some of the world's cleverest people, including Tesla and SpaceX boss Elon Musk and physicist Stephen Hawking, have warned us that artificial intelligence could wipe humanity as we know it off the face of the Earth. The question is: "What are we going to do about it? " Star Wars: Battlefront with Toddyhancer (Build 2) Will Artificial Intelligence Surpass Our Own? Famed science-fiction writer Fredric Brown (1906–1972) delighted in creating the shortest of short stories. 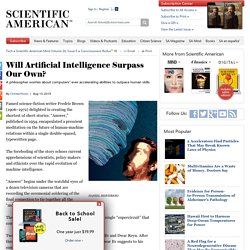 “Answer,” published in 1954, encapsulated a prescient meditation on the future of human-machine relations within a single double-spaced, typewritten page. The foreboding of the story echoes current apprehensions of scientists, policy makers and ethicists over the rapid evolution of machine intelligence. Nanoparticle liquid-metal ink allows standard inkjet printers to create flexible circuits. Researchers at Purdue University have shown how standard inkjet-printers can be employed to produce flexible electronic circuits from liquid-metal nanoparticle inks. 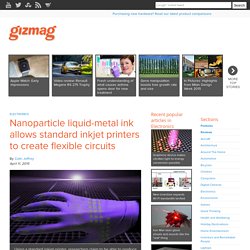 This simple printing solution promises faster, cheaper, and easier production of stretchable, bendable electronics for clothing, soft robotics, and wearable devices. Making circuits elastic means that many rigid platforms could be made pliable, opening up a range of potential new applications for electronic devices. To make this possible, however, new manufacturing techniques are required. 6 of the Coolest Science Toys Coming Out in 2015. Quest for Quantum Computers Heats Up.

Ancient Scrolls, Burned in Vesuvius Volcano Eruption, Deciphered by Advanced X-Ray Scans. Scientists in Italy have managed to decipher text on a badly scorched papyrus roll from Herculaneum, a town destroyed with Pompeii in the Mount Vesuvius eruption of 79AD. 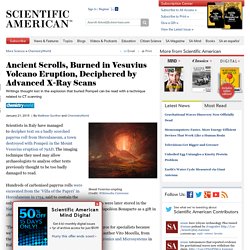 The imaging technique they used may allow archaeologists to analyse other texts previously thought to be too badly damaged to read. Medical Technology, 1915 [Slideshow] Email X-Ray Van In World War I armies relied on mobile “Roentgen ray” outfits to provide x-ray images. 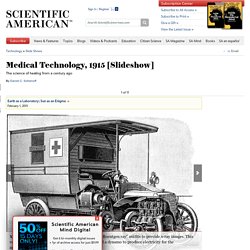 This version, from 1904, in a Panhard-Levassor truck, had a dynamo to produce electricity for the apparatus.....[ More ] A New Way to Reach Mars Safely, Anytime and on the Cheap. Getting spacecraft to Mars is quite a hassle. Transportation costs can soar into the hundreds of millions of dollars, even when blasting off during "launch windows"—the optimal orbital alignments of Earth and Mars that roll around only every 26 months. A huge contributor to that bottom line? EngineerGirl - Homepage. Niwa Smartphone Controlled Growing Environment. Anyone looking to grow their own vegetables or plants within their house and might not have access to a garden. Might be interested in a new growing system called Niwa which can be controlled using its companion smartphone application directly fro your phone.

The new Niwa smartphone controlled plant growing system, enables you to grow the freshest, healthiest food on Earth, say its creators, who explain more in the video after the jump. Bend It, Charge It, Dunk It: Graphene, the Material of Tomorrow. Brainlike Computers, Learning From Experience. The first commercial version of the new kind of computer chip is scheduled to be released in 2014. Technologic nostalgia. Build a Pocket Theremin on the Cheap. Transhuman. Hacking. Scripting (Java, DHTML, etc...) GIMP. Favicon Generator.