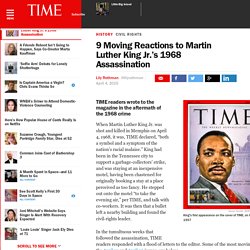 King had been in the Tennessee city to support a garbage-collectors’ strike, and was staying at an inexpensive motel, having been chastened for originally booking a stay at a place perceived as too fancy. He stepped out onto the motel “to take the evening air,” per TIME, and talk with co-workers. It was then that a bullet left a nearby building and found the civil-rights leader.

In the tumultuous weeks that followed the assassination, TIME readers responded with a flood of letters to the editor. Some of the most moving, from the April 19 and April 26 issues, are below. From Joyce K. Sir: Martin Luther King was murdered because he was our uncomfortable conscience. From John Barry of Los Angeles: Sir: His great, huge face is set forever in our memories; be it that his vision of brotherhood sets in our hearts.

From Dorothy S. Do what's right. Everyday tools. Capitalism life is social. Capitalism outlived usefulness. Capitalistic economy. Hands up don't shoot. The Martin Luther King You Don’t See on TV. It's become a TV ritual: Every year in mid-January, around the time of Martin Luther King's birthday, we get perfunctory network news reports about "the slain civil rights leader. 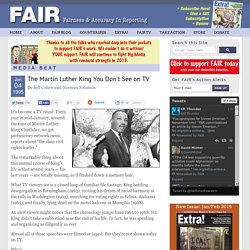 " The remarkable thing about this annual review of King's life is that several years — his last years — are totally missing, as if flushed down a memory hole. What TV viewers see is a closed loop of familiar file footage: King battling desegregation in Birmingham (1963); reciting his dream of racial harmony at the rally in Washington (1963); marching for voting rights in Selma, Alabama (1965); and finally, lying dead on the motel balcony in Memphis (1968). An alert viewer might notice that the chronology jumps from 1965 to 1968. Yet King didn't take a sabbatical near the end of his life. In fact, he was speaking and organizing as diligently as ever. Almost all of those speeches were filmed or taped. Why? Faith is taking the first step. Love is the only force. Demanded by the oppressed. #ReclaimMLK, Protesters Plan to Forge the More Confrontational Side of King’s... On Monday, during the federal holiday set aside to celebrate the life and work Martin Luther King Jr., a new generation of Americans tired of persistent racial inequality, discrimination, and police violence directed at specific segments of society will participate in actions designed to reclaim the legacy of the famous civil rights leader. 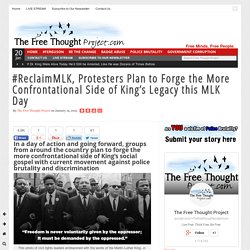 In a day of action, designated on social media sites as #ReclaimMLK, groups from around the country plan to forge the more radical and confrontational side of King’s social gospel and activism with the messaging and spirit of the ‘black lives matters” movement that sprouted nationwide in the wake of several high-profile killings of unarmed black men by police in 2014.

As a statement from Ferguson Action, one of the group’s behind the effort, explains: Martin Luther King Jr’s life’s work was the elevation, honoring, and defense of Black Lives. His tools included non-violent civil disobedience and direct action. Dr. Time is always right. If Dr. King Were Alive Today He’d Still be Arrested, Like He was Dozens of Ti... Alabama State troopers attack civil-rights demonstrators on Bloody Sunday, March 7, 1965 When most people think of the great man, born Michael King on January 15, 1929, they see an advocate for peace, who is celebrated by the US government; honored every year, in January, on the third Monday. 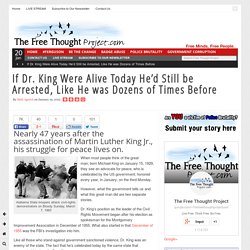 However, what the government tells us and what this great man did are two separate stories. Dr. King’s position as the leader of the Civil Rights Movement began after his election as spokesman for the Montgomery Improvement Association in December of 1955. What also started in that December of 1955 was the FBI’s investigation into him. 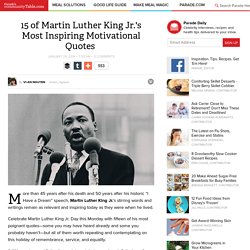 ‘s stirring words and writings remain as relevant and inspiring today as they were when he lived. Celebrate Martin Luther King Jr. Day this Monday with fifteen of his most poignant quotes—some you may have heard already and some you probably haven’t—but all of them worth repeating and contemplating on this holiday of remembrance, service, and equality. 1. “We must accept finite disappointment, but never lose infinite hope.” 2. 3. Explain this shit. Dikes of courage. Continuous struggle. Sincere ignorance. Together as brothers. Injustice anywhere. Passively accept. Unarmed truth. Measure of a man. Mlk. MLK. Stick with love.