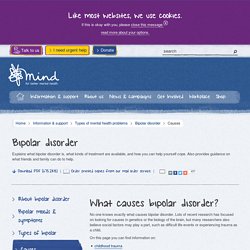 Lots of recent research has focused on looking for causes in genetics or the biology of the brain, but many researchers also believe social factors may play a part, such as difficult life events or experiencing trauma as a child. On this page you can find information on: Childhood trauma Some experts believe you may develop bipolar disorder if you experienced severe emotional distress as a child, such as: sexual or physical abuseneglecttraumatic eventslosing someone very close to you, such as a parent or carer This could be because experiencing trauma and distress as a child can have a big effect on your ability to regulate your emotions.

Stressful life events You may be able to link the start of your symptoms to a very stressful period in your life, such as: a relationship breakdownmoney worries and povertyexperiencing a traumatic loss Self-esteem problems Brain chemistry Genetic inheritance. Bipolar Disorder (manic depression) New video This three minute animation explores the symptoms of Bipolar Disorder, and what help you can get if you think you might be Bipolar. 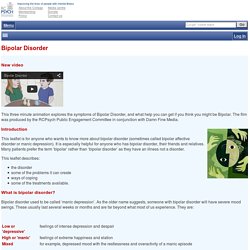 The film was produced by the RCPsych Public Engagement Committee in conjunction with Damn Fine Media. Introduction. Bipolar disorder. New Findings on Chemical Linked to Bipolar Psychosis. Researchers have discovered a gene that is likely to play a role in the risk of psychosis in bipolar disorders. 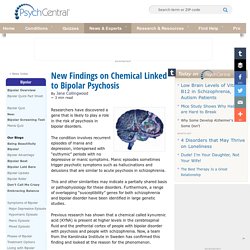 The condition involves recurrent episodes of mania and depression, interspersed with “euthymic” periods with no depressive or manic symptoms. Manic episodes sometimes trigger psychotic symptoms such as hallucinations and delusions that are similar to acute psychosis in schizophrenia. This and other similarities may indicate a partially shared basis or pathophysiology for these disorders. Furthermore, a range of overlapping “susceptibility” genes for both schizophrenia and bipolar disorder have been identified in large genetic studies. Previous research has shown that a chemical called kynurenic acid (KYNA) is present at higher levels in the cerebrospinal fluid and the prefrontal cortex of people with bipolar disorder with psychosis and people with schizophrenia. Researching the Link. Bipolar Disorder Plano / DFW. The guiding principle behind NeuroMatrix Neural Efficiency Training is that performance (attention, focus, learning ability), mood, memory, behavior, and emotional resilience are all created by our brain. 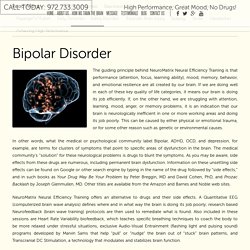 If we are doing well in each of these key quality of life categories, it means our brain is doing its job efficiently. If, on the other hand, we are struggling with attention, learning, mood, anger, or memory problems, it is an indication that our brain is neurologically inefficient in one or more working areas and doing its job poorly. This can be caused by either physical or emotional trauma, or for some other reason such as genetic or environmental causes. In other words, what the medical or psychological community label Bipolar, ADHD, OCD, and depression, for example, are terms for clusters of symptoms that point to specific areas of dysfunction in the brain. The medical community’s “solution” for these neurological problems is drugs to blunt the symptoms.

Low Omega-3’s Linked with Bipolar Disorder. A new study finds that people with bipolar disorder have lower levels of certain omega-3 fatty acids that cross the blood-brain barrier than people who do not. 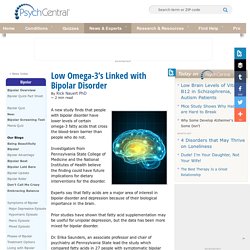 Investigators from Pennsylvania State College of Medicine and the National Institutes of Health believe the finding could have future implications for dietary interventions for the disorder. Experts say that fatty acids are a major area of interest in bipolar disorder and depression because of their biological importance in the brain. Prior studies have shown that fatty acid supplementation may be useful for unipolar depression, but the data has been more mixed for bipolar disorder. Dr. Erika Saunders, an associate professor and chair of psychiatry at Pennsylvania State lead the study which compared fatty acids in 27 people with symptomatic bipolar disorder and 31 healthy control subjects. Study findings were published in the journal Bipolar Disorders. “Is that because we only included certain foods in the survey? Bipolar Youth Show Distinct Pattern of Brain Development.

The first picturess of the brain changing before-and-after the onset of pediatric bipolar disorder reveal a distinct pattern of development, when compared to that seen in healthy youth or in childhood onset schizophrenia. 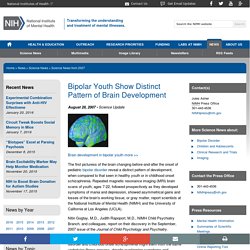 Repeated magnetic resonance imaging (MRI) brain scans of youth, ages 7-22, followed prospectively as they developed symptoms of mania and depression, showed asymmetrical gains and losses of the brain's working tissue, or gray matter, report scientists at the National Institute of Mental Health (NIMH) and the University of California at Los Angeles (UCLA). Nitin Gogtay, M.D., Judith Rapoport, M.D., NIMH Child Psychiatry Branch, and colleagues, report on their discovery in the September, 2007 issue of the Journal of Child Psychology and Psychiatry. "Our findings should help put to rest speculation that pediatric bipolar disorder and childhood onset schizophrenia might stem from the same underlying illness process, despite overlapping symptoms and genetics," said Gogtay.