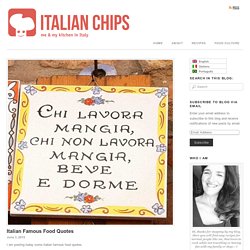 There are some famous Italian phrases that have become unique to Italian life and you may find them mentioned in cookery books or in a typical restaurant menus. Italians believe that food solves anything. In Italy, people use to talk and discuss about important problems or issues around a table for lunch or dinner. Italian Popular Food Quotes . . . . . . . . The 20 funniest Portuguese expressions (and how to use them) Father's Love Letter - Victory Bible Baptist Church. Festival2.pdf. Quinta d'Avo, Healthy Chili, Chili Peppers, Piri-Piri, Portuguese Cuisine. 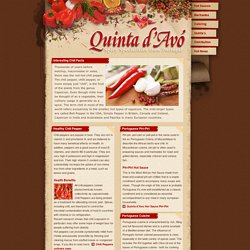 They are rich in vitamin C and provitamin A. and are believed to have many beneficial effects on health. In addition, peppers are a good source of most B vitamins, and vitamin B6 in particular. They are very high in potassium and high in magnesium and iron. Their high vitamin C content can also substantially increase the uptake of non-heme iron from other ingredients in a meal, such as beans and grains. Health Benefits All chili peppers contain phytochemicals known collectively as capsaicinoids. Weird Things All Couples Fight About. Basic Portuguese Phrases. Hey Travellers, if you don't want to learn anything else, at least learn this! 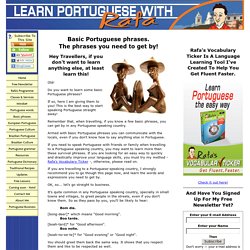 Olá! Do you want to learn some basic Portuguese phrases? If so, here I am giving them to you! This is the best way to start speaking Portuguese straight away! Portuguese Words and Phrases. An Unparalleled Dining Experience. Quinta d'Avo, Healthy Chili, Chili Peppers, Piri-Piri, Portuguese Cuisine. The Fine Art of Italian Hand Gestures: A Vintage Visual Dictionary by Bruno Munari. By Maria Popova A pocket guide to Neapolitan nonverbal communication. 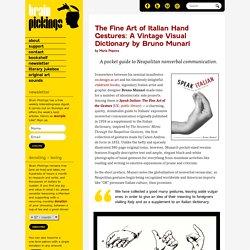 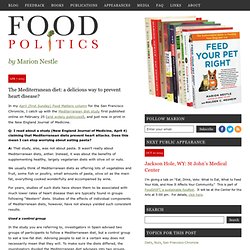 Q: I read about a study (New England Journal of Medicine, April 4) claiming that Mediterranean diets prevent heart attacks. Does this mean I can stop worrying about eating pasta? B E R T O L L I. Helpful Information - Italian Food Supersitions, Sayings and Proverbs - Food and Travel. An old superstition dictated that all loaves of bread must be marked with a sign of the cross before baking. 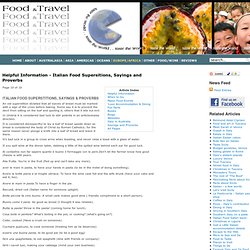 Some say it is to prevent the devil from sitting on the loaf and spoiling it; others that it lets out evil. In Umbria it is considered bad luck to stiir polenta in an anticlockwise direction. It is considered disrespectful to lay a loaf of bread upside down as bread is considered the body of Christ by Roman Catholics; for the same reason never plunge a knife into a loaf of bread and leave it there. It’s bad luck in a group to cross arms when toasting, and never raise a toast with a glass of water. If you spill wine at the dinner table, dabbing a little of the spilled wine behind each ear for good luck. Al contadino non far sapere quanto è buono il formaggio con le pere. Alla frutta. Aver le mani in pasta, to have your hands in pasta (to be in the midst of doing something). Avere la botte piena e la moglie ubriaca. 50 Popular italian sayings about food. Italian proverbs. Salvatore Cuomo: Scientists Prove "Mozzarella" is Best Cheese for Pizza.

Forget "opinions"... where there are scientific imperical proves, opinions are meaningless. 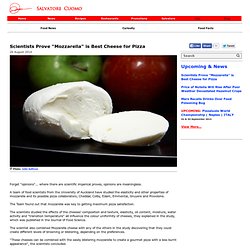 A team of food scientists from the University of Auckland have studied the elasticity and other properties of mozzarella and its possible pizza collaborators; Cheddar, Colby, Edam, Emmental, Gruyere and Provolone. The Team found out that mozzarella was key to getting maximum pizza satisfaction. The scientists studied the effects of the cheeses’ composition and texture, elasticity, oil content, moisture, water activity and "transition temperature" all influence the colour uniformity of cheeses, they explained in the study, which was published in the Journal of Food Science.

The scientist also combined Mozzarella cheese with any of the others in the study discovering that they could create different levels of browning or blistering, depending on the preferences. Italy Memes. Best Collection of Funny Italy Pictures. Italian meal structure. The Italian meal structure is similar to to most other European ones, consisting of a breakfast, lunch and dinner. 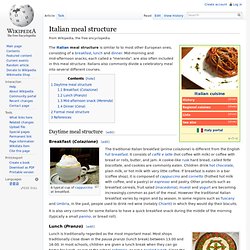 Mid-morning and mid-afternoon snacks, each called a "merenda", are also often included in this meal structure. Italians also commonly divide a celebratory meal into several different courses. Daytime meal structure[edit] Breakfast (Colazione)[edit] It is also very common for some Italians to have a quick breakfast snack during the middle of the morning (typically a small panino, or bread roll). Italians Say It Best: 10 Brilliant Food-Centric Expressions. MyPlate Meal: Healthy, Kid-Friendly Italian Pasta Night - Real Healthy - Cooking. Oh, Italy, we owe you so much. 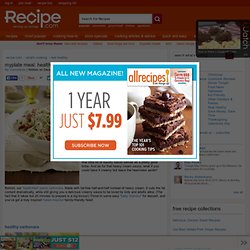 Not only did you give us DaVinci and Michelangelo, but also you created a cuisine beloved worldwide — even by kids. Mothers everywhere know that even their pickiest eaters will willingly eat both pasta and pizza, and for that alone, Italy, we thank you. Timeline Photos - Erica Sturla Original Art. Italian Quotes Page 2. (96) Fabio's Hermanus.