The Future of Wearables is Apparel, Not Novelties. At least in terms of hype, wearable technology hit the mainstream on Monday. 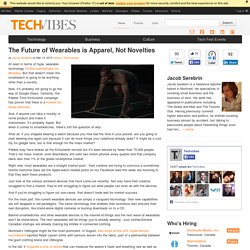 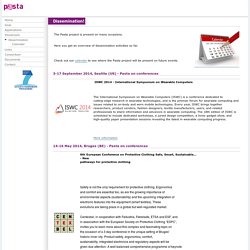 Materials - Karlsson Robotics. Knitting wearable technology. Graphene – Superpowers for Wearables? Graphene is the new super material in the tech industry and excites researchers and product developers all over the world with its unchallenged properties. 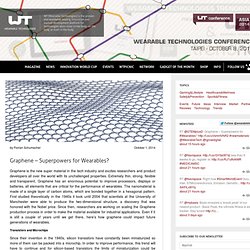 Extremely thin, strong, flexible and transparent, Graphene has an enormous potential to improve processors, displays or batteries, all elements that are critical for the performance of wearables. The nanomaterial is made of a single layer of carbon atoms, which are bonded together in a hexagonal pattern. First studied theoretically in the 1940s it took until 2004 that scientists at the University of Manchester were able to produce the two-dimensional structure, a discovery that was honored with the Nobel price. Since then, researchers are working on scaling the Graphene production process in order to make the material available for industrial applications. E-textiles and the future of wearable technology. The Alert Shirt by Wearable Experiments (WE:EX) is a fan jersey that allows the wearer to feel what the players feel live as it happens during a game. 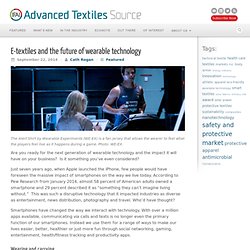 Photo: WE:EX. Are you ready for the next generation of wearable technology and the impact it will have on your business? Is it something you’ve even considered? Just seven years ago, when Apple launched the iPhone, few people would have foreseen the massive impact of smartphones on the way we live today. According to Pew Research from January 2014, almost 58 percent of American adults owned a smartphone and 29 percent described it as “something they can’t imagine living without.” How Hexoskin is helping athletes perform better. Smart clothing and biofeedback company, Hexoskin, recently featured in a news report in its home country of Canada about how the company has been working with professional athletes and most notably the Sochi Winter Olympics gold and silver medalist skiers the Dufour-Lapointe sisters. 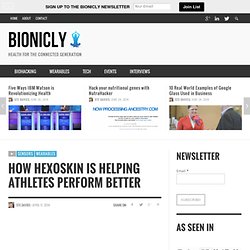 The video snippet profiles the Hexoskin’s bluetooth vest which tracks the body’s vital signs including heart rate, heart rate variability, breathing, VO2 max, stress, sleep and activity level. In one section of the video the Dufour-Lapointe sisters’ trainer describes how they used Hexoskin to discover that one of the girls wasn’t breathing while performing a jump. Both trainer and athlete were not aware of the issue but by identifying and addressing it they added three to four inches more to her jump. In professional sports three to four inches can often mean the difference between winning and losing.

A cortiça como um valor acrescentado e sustentável no desenvolvimento de revestimentos multifuncionais. The Plastic Bank Lets You Deposit Your Recyclable Plastics For Dollars. The Plastic Bank is an endeavor to create value in recycling in countries with high poverty levels and low recycling rates. 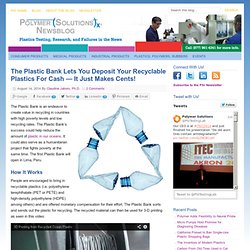 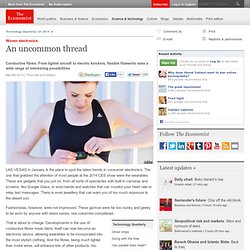 The one that grabbed the attention of most people at the 2014 CES show were the wearables. These are gadgets that you put on, from all sorts of spectacles with built-in cameras and screens, like Google Glass, to wrist bands and watches that can monitor your heart rate or relay text messages. There is even jewellery that can warn you of too much exposure to the desert sun. Fashionistas, however, were not impressed. Medical Textiles: How Smart Do They Have To Be? Within any specific market, a number of trends and influencing factors are catalysts for changing needs and higher performance requirements. 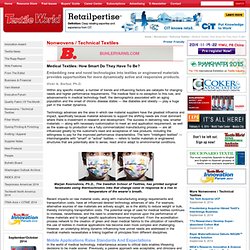 The medical field is no exception to this rule, and advancements in medical technology itself, the demographics associated with an aging population and the onset of chronic disease states — like diabetes and obesity — play a huge part in the market dynamics. Home - Primo1D - The E-Thread Technology. Effects of nanoparticles in textiles. 23rd December 2013, Boennigheim Hohenstein Institute, a leading provider of technical testing and certification for apparel and textile products, will present a webinar entitled ‘Nanotechnology, Human Health, and the Environment: Answers to the Questions Surrounding Silver Nanoparticles’ on 15 January 2014. 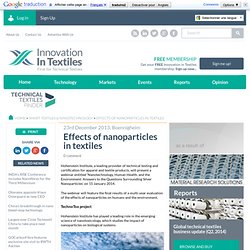 The webinar will feature the final results of a multi-year evaluation of the effects of nanoparticles on humans and the environment. TechnoTox project Hohenstein Institute has played a leading role in the emerging science of nanotoxicology, which studies the impact of nanoparticles on biological systems. Since 2010 Hohenstein has been a partner in two large-scale, inter-disciplinary German studies designed to quantify the safety of nanoparticles for people and for the environment. Safety standards. Japanese 'smart clothing' uses nanofibers to monitor your heart-rate (video) Japanese mobile carrier NTT Docomo and materials developer Toray have been working on joint projects for a while and now they're publicly announcing one. 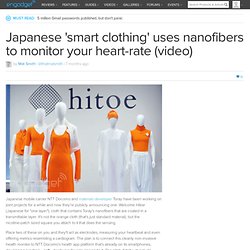 Welcome Hitoe (Japanese for "one layer"), cloth that contains Toray's nanofibers that are coated in a transmittable layer. It's not the orange cloth (that's just standard material), but the nicotine-patch sized square you attach to it that does the sensing. Place two of these on you and they'll act as electrodes, measuring your heartbeat and even offering metrics resembling a cardiogram. The plan is to connect this cleanly non-invasive health monitor to NTT Docomo's health app platform that's already on its smartphones, developing practical... soft... hardware for sale alongside it.

The pitch didn't just include sports clothing, however, with pajamas and other sleepwear planned for launch. E-Textiles For Wearability: Review Of Integration Technologies. Abstract This paper provides the latest insights into emerging technology to enhance wearability of e-textiles and smart clothing by reviewing the cutting-edge researches and development. Misconception of wearability in smart wearable systems is pointed out, and attachable technological components are suggested as one of the best known solutions. Such components allow the most fragile technologies to be protected or removed depending on the environmental changes or users' preferences. Based on the concept of attachable electronics, the textile transmission system is introduced in which transmission lines and connectors are integrated to the fabric.

The textile transmission system is designed to connect attachable electronic devices by supplying power and transferring data signals. Introduction. E-Textiles For Wearability: Review On Electrical And Mechanical Properties. Several strategies were found to make more secured conductive traces. According to an empirical report, the resistance of spun conductive yarns varied depending on yarn tensions; a conductive yarn became more resistive under no tension.

Weaving with Conductive Thread: Clasped Weft - Português. Clasped Weft Weaving with Conductive Thread and LEDs. Lots is happening in the world of eTextiles! Electronically enhanced textiles have moved beyond scientific studies (such as wearable computers and chemical-sensing textiles), beyond adaptive uses and assistive clothing, and into the realm of high fashion and art. One innovation that's helped eTextiles move out of the lab and into the studio is the LilyPad Arduino—a microcontroller conceived by Leah Buechley and produced by Sparkfun Electronics.

This programmable hardware can drive electronic components such as light-emitting diodes (LEDs), soundboards, vibration motors (vibes) and even sonar-range finders, which can let your textile know when it's approaching an obstacle. If you can dream it, you can find the hardware to build it! Search for "sett" - Peggy Osterkamp's Weaving BlogPeggy Osterkamp's Weaving Blog.

E-textiles: The Ultimate in Flexible Computing. Computer engineers in Torgersen Hall may be weaving the future of specialized fabrics — e-textiles that can be used to sense tank movements, monitor homes for noxious chemicals, help firefighters maneuver in smoky buildings, and perhaps help stroke victims recover their function. Their biggest result to date is a 30-foot swath of fabric interwoven with stainless steel thread, and styled with microphones, sensors, connectors, and circuit boards.

The 30-foot fabric is a prototype acoustic array for use in military sensing. It is strong, lightweight, and flexible. It can potentially be fabricated as tents, parachutes, or camouflage nets. Developed specifically to detect and locate tank and military vehicle movements, it is the first functional e-textile that can perform all the operations involved. Military Advantages Over Wireless Sensing Networks The technology has potential in many sensing and monitoring applications, such as monitoring homes for carbon monoxide, or other chemicals.

Associação Selectiva Moda - Notícias - TÊXTEIS INTELIGENTES FALAM PORTUGUÊS. HOW TO GET WHAT YOU WANT. Bare Conductive. HOW TO GET WHAT YOU WANT. Lynne Bruning - eTextiles, Art, Fashion. Lynne Bruning - eTextiles, Art, Fashion. Meg grant. 3lectromode. CITEVE - Home Page. Who we are. EURATEX is the European Confederation representing the interests at the level of the EU institutions of the European textile and clothing industries as a whole. A Secretariat deals with the numerous policy issues that are of direct interest to our industry. Given that in the European Commission alone there are potentially 11 Directorates General and at least 5 decentralised agencies to do business with, effective input from EURATEX can be achieved only with the committed support of specialists from our members.