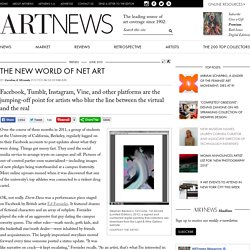 Over the course of three months in 2011, a group of students at the University of California, Berkeley, regularly logged on to their Facebook accounts to post updates about what they were doing. Things got messy fast. They used the social media service to arrange trysts on campus and off. Pictures of out-of-control parties soon materialized—including images of new pledges being waterboarded at a campus fraternity. More online uproars ensued when it was discovered that one of the university’s top athletes was connected to a violent drug cartel. OK, not really. JODI’s 2008 Web work GEOGOO riffson Google Maps.COURTESY THE ARTIST But as the Web has evolved, so too has the notion of what might be considered Internet art. The New World of Net Art. Will S[edition] Become the App Store of Digital Art? Elmgreen & Dragset’s “Powerless Structures, Fig. 101″ (ed. of 5,000) is one of the works available on the s[edition] digital platform. 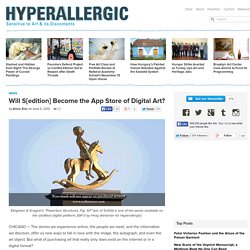 (GIF’d by Hrag Vartanian for Hyperallergic) CHICAGO — The stories we experience online, the people we meet, and the information we discover, offer us new ways to fall in love with the image, the autograph, and even the art object. But what of purchasing art that really only does exist on the internet or in a digital format? Today, a new expanded version of s[edition] launches and it will allow artists working with a wide range of digital technologies, including moving image, motion graphic, photography, generative art, illustration, and design, to be able to upload their work to the s[edition] platform and start selling their works to people around the world. Angelo Plessas. Artists who sell work receive 50% commission on works, which is congruent to the artist-dealer rate. Preservation of Digital Art Poses Challenges. Journal/wp-content/uploads/2013/10/mucinskas.pdf. 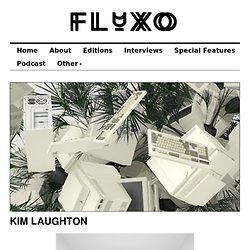 Kim consider himself a little impatient because he usually don’t like anything that isn’t finished in a day or two. You may recognize his work from some of Kingdom‘s visuals or from TIMEFLY (his personal clothing label). TIMEFLY is where Kim puts most of his energy, where he can enjoy the sense of collaborating with the artists who produce designs to go on the clothes through the renders, even if the collaboration is very one sided. There are some exciting new artists lined up for TIMEFLY, giving a lot of potential to play with the whole thing. [#DIGART] Rafaël Rozendaal On The Magic And Value Of Domain Names. This week we’re exploring the Digital Arts Market (or lack thereof). 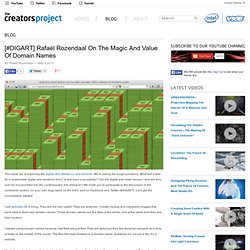 We’re asking the tough questions: What will it take for a sustainable digital arts market to form? Is that even a possibility? Can the digital arts make money? And will they ever be incorporated into the contemporary arts dialogue? We invite you to participate in the discussion in the comments section, on your own blog (send us the link!) I sell websites for a living. I started using domain names because I felt files are just files. Much like web startups, artists start by building an audience first and then figure out the money part. Jello Time .com (2007), collection of Sébastien de Ganay I present my works out in the open.

The nice thing about domain names is that they actually are scarce. Raphaël Rozendaal: le Monsieur « Neen Art » CRUMB Interviews: An interview with Christiane Paul. Digital Art And Culture: A 21st Century Paradigm Shift. Max Eternity for Truthout | News Analysis & Feature Podcast – At a time when extreme, economic austerity measures are being considered and/or enacted by a number of Western governments – Greece, Spain, Germany, the US, and elsewhere – one has to wonder why, in the UK, a collective of government agencies in England have just allocated $815,000 for digital art and culture. 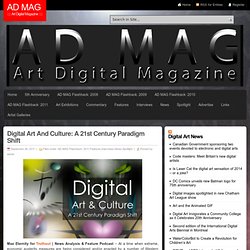 In speaking to this massive public works project, Alan Davey, CEO of the Arts Council England says, “How the cultural sectors engage with emerging and existing digital technologies in the next few years will have far reaching effects on our creative, social and economic lives, as artists and audience members.” Commenting as well on the new program, the Minister for Culture, Communications and Creative Industries, Ed Vaizey, said: Our lives are increasingly defined by how we engage and interact with the world digitally and cultural organizations can’t afford to be left behind. 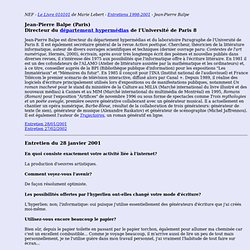