It's Time for Tea. By Dawn Copeman Nothing is considered as quintessentially English as tea. 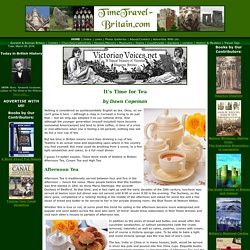 Okay, so we can't grow it here -- although a chap in Cornwall is trying to do just that -- but we long ago adopted it as our national drink. And although the younger generation (myself included) have become somewhat Americanized and tend to drink coffee, in time of a crisis or mid-afternoon when one is feeling a bit peckish, nothing else will do but a nice cup of tea. But tea time in Britain means more than drinking a cup of tea. Teatime is an actual meal and depending upon where in the country you find yourself, this meal could be anything from a scone, to a few light sandwiches and cakes, to a full roast dinner. I guess I'd better explain. Kinds of Tea Varieties. How to make a cup of tea. Tea history worksheet - Free ESL projectable worksheets made by teachers. The science of tea.

All tea is made from the leaves of the tea plant, Camellia sinensis. 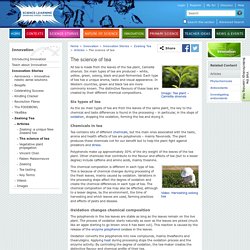 Most Popular Types of Tea. Black tea is the most well-known variety of tea in the West. 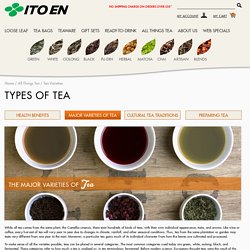 Known as "red tea" in China, black tea leaves are fully oxidized. In the case of most black teas, younger leaves are picked before being withered, rolled, fully oxidized, and fired. While created originally in China, black teas are now cultivated worldwide. Some of the most famous black teas come from the Indian regions of Assam, Darjeeling, and Nilgiri as well as Sri Lanka. The use of machines is becoming more common, but the best black teas are those entirely done by hand. The long-standing trend in black tea, taken from the British, has been to create "blends". However, another trend in black teas has recently taken off. With both blends and estate teas, it is frequent to see black teas divided into broken leaf and full leaf categories. Famous Chinese Black Teas: KEEMUN – a sophisticated tea known for its refined orchid-like aroma and subtle notes of dark chocolate. 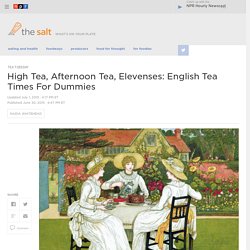 Chromolithograph after Kate Greenaway. If you're looking for finger sandwiches, dainty desserts and formality, afternoon tea is your cup. Print Collector/Getty Images hide caption toggle caption Print Collector/Getty Images. It's Time for Tea. How to Make English Tea: 8 Steps. How to make a cup of tea. The Afternoon Tea Menu. History Of Afternoon Tea. History Of Afternoon Tea Tea consumption increased dramatically during the early nineteenth century and it is around this time that Anna, the 7th Duchess of Bedford is said to have complained of "having that sinking feeling" during the late afternoon. 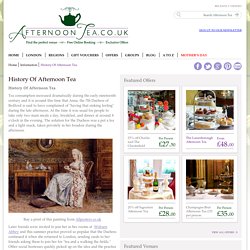 At the time it was usual for people to take only two main meals a day, breakfast, and dinner at around 8 o'clock in the evening. The solution for the Duchess was a pot a tea and a light snack, taken privately in her boudoir during the afternoon. Buy a print of this painting from Allposters.co.uk Later friends were invited to join her in her rooms at Woburn Abbey and this summer practice proved so popular that the Duchess continued it when she returned to London, sending cards to her friends asking them to join her for "tea and a walking the fields. 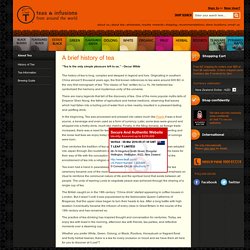 Originating in southern China almost 5 thousand years ago; the first known references to tea were around 600 BC in the very first monograph of tea “The classic of Tea” written by Lu Yu. He believed tea symbolized the harmony and mysterious unity of the universe. There are many legends that tell of the discovery of tea. One of the more popular myths tells of Emperor Shen Nong, the father of agriculture and herbal medicine, observing that leaves which had fallen into a boiling pot of water from a tree nearby resulted in a pleasant tasting and uplifting drink.