User Satisfaction vs. Performance Metrics. Summary: Users generally prefer designs that are fast and easy to use, but satisfaction isn't 100% correlated with objective usability metrics. 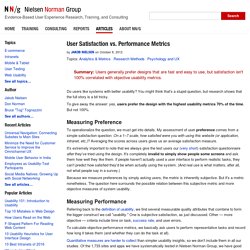 Do users like systems with better usability? You might think that's a stupid question, but research shows that the full story is a bit tricky. To give away the answer: yes, users prefer the design with the highest usability metrics 70% of the time. But not 100%. Measuring Preference To operationalize the question, we must get into details. It's extremely important to note that we always give the test users our (very short) satisfaction questionnaire after they've tried using the design. Because we measure preferences by simply asking users, the metric is inherently subjective. Measuring Performance. SUM: Single Usability Metric: MeasuringU. (Presented at CHI 2005) Jeff Sauro • April 17, 2005 SUM is a standardized, summated and single usability metric. 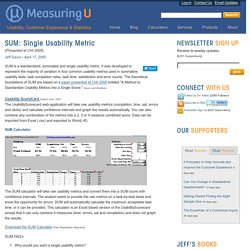 Usability Metrics - A Guide To Quantify The Usability Of Any System. A metric is a “system or standard of measurement” represented in units that can be utilized to describe more than one attribute. 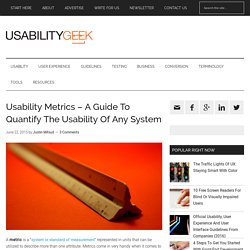 Metrics come in very handy when it comes to quantify usability during the usability evaluation of software, websites and applications. Why would you need to Measure Usability? There are many reasons as to why someone would require to measure usability – the most common reason being the need to effectively communicate with the stakeholders of the system being evaluated. Other uses can be to satisfy the need for comparing the usability of two or more products and to quantify the severity of a usability problem. Ultimately, the primary objective of usability metrics is to assist in producing a system or product that is neither under- nor over-engineered. UX Design Trends & Forecast for 2015/2016. Posted on 13'15 Aug Posted on August 13, 2015 along with 9 JUST™ Creative Comments This article has been contributed by Sophia. 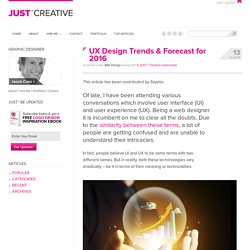 Of late, I have been attending various conversations which involve user interface (UI) and user experience (UX). Being a web designer it is incumbent on me to clear all the doubts. Due to the similarity between these terms, a lot of people are getting confused and are unable to understand their intricacies. 17 Testing Tools for Mobile UX. Below, you will find 17 tools that will help you test various features of your app and obtain real-time feedback. 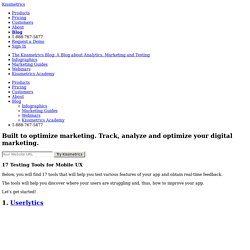 The tools will help you discover where your users are struggling and, thus, how to improve your app. Let’s get started! 1. Userlytics Best feature – Recruiting couldn’t be any simpler. Microsoft Research - Turning ideas into reality. 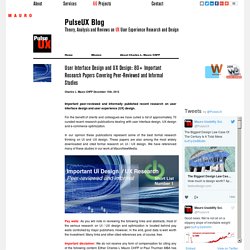 For the benefit of clients and colleagues we have culled a list of approximately 70 curated recent research publications dealing with user interface design, UX design and e-commerce optimization. In our opinion these publications represent some of the best formal research thinking on UI and UX design. These papers are also among the most widely downloaded and cited formal research on UI / UX design.

We have referenced many of these studies in our work at MauroNewMedia. Pay walls: As you will note in reviewing the following links and abstracts, most of the serious research on UI / UX design and optimization is located behind pay walls controlled by major publishers. Important disclaimer: We do not receive any form of compensation for citing any of the following content. Abstract User experience seeks to promote rich, engaging interactions between users and systems.

10 UX Design Trends You Shouldn't Overlook in 2015. In today’s fast-changing world of user experience design, predicting the future is no longer the art of gazing into a crystal ball. 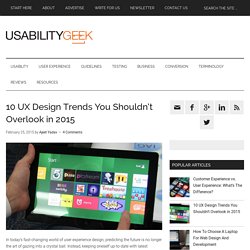 Instead, keeping oneself up-to-date with latest techniques and trends not only delivers a better user experience but also gives a leading edge over the competition. With 2014 completely over (and 2 months from 2015 too), its a perfect time to take stock of what trends will make waves in the remainder of 2015. Being a UX geek, I have decided to write this article for the purpose of discussing UX design trends which I think will dominate 2015. Some of these trends actually emerged in 2014 or even before but we will see them making even bigger waves in 2015. Let’s take a look at them one by one! UX Methods & Deliverables — Hints from the lazy bear. Lean UX for Startups and Enterprise: Ten Secrets to Success. Why You're Over-Thinking Your UI/UX with Rohan Puri.

So you wanna be a user experience designer. Want to pursue a career in UX, but don’t know where to start? 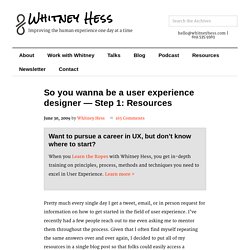 When you Learn the Ropes with Whitney Hess, you get in-depth training on principles, process, methods and techniques you need to excel in User Experience. Learn more > Pretty much every single day I get a tweet, email, or in person request for information on how to get started in the field of user experience. I’ve recently had a few people reach out to me even asking me to mentor them throughout the process. Given that I often find myself repeating the same answers over and over again, I decided to put all of my resources in a single blog post so that folks could easily access a consolidated version of my advice. So you wanna be a user experience designer?

The best way to learn a new language is to go to a country where it’s spoken and immerse yourself in the confusion. If you’re interested in getting to know more about user experience, I recommend doing the same. …as well as any other topics that come up along the way. Usability.gov. Online card sorting – ConceptCodify. Your BEST Source for Usability Information and Usability Tools.

Related:  So you wanna be a user experience designer   -  Usability.gov   -  Education   -  Enterprise