The workspace for your life’s work. BlogBooker - Blog Book. Scroll box in FieldSet . (FIXED) - Myspace Scripts. Site themes and skins by category. Display Smilies & Emoticons in Facebook Chat. Handwriting font creator. Free login to any site. Online converter - convert video, images, audio and documents for free. Styling <hr> with CSS. Introduction Even though it's sometimes recommended to replace the <hr> element with cascading stylesheets only using horizontal borders of other elements, I prefer <hr> as a section divider. 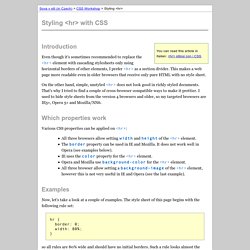 This makes a web page more readable even in older browsers that receive only pure HTML with no style sheet. On the other hand, simple, unstyled <hr> does not look good in richly styled documents. That's why I tried to find a couple of cross-browser compatible ways to make it prettier. I used to hide style sheets from the version 4 browsers and older, so my targeted browsers are IE5+, Opera 5+ and Mozilla/NN6. Which properties work Various CSS properties can be applied on <hr>: All three browsers allow setting width and height of the <hr> element. Examples Now, let's take a look at a couple of examples. So all rules are 80% wide and should have no initial borders. Let's add colors If you want to show a solid, red line, use the following code: color: #f00; background-color: #f00; height: 5px; Conclusion Notes.

How to Create a Tumblr Theme (Code Structure) As we have previously seen, Tumblr allows its uses to create custom themes, giving the owner of a tumbleblog the ability to truly customise their tumbleblog to be their own. 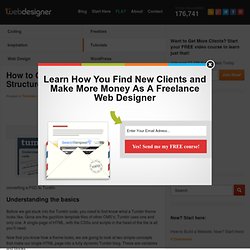 While Tumblr coding is fairly easy to pick up compared to other more complex blogging systems, I want to give you an insight into the code and structure we are going to be deploying next time around when we set about converting a PSD to Tumblr. Understanding the basics Before we get stuck into the Tumblr code, you need to first know what a Tumblr theme looks like. Gone are the gazillion template files of other CMS’s; Tumblr uses one and only one. A single page of HTML, with the CSSs and scripts in the head of the file is all you’ll need. Now that you know how a theme looks, we are going to look at two simple concepts that make our single HTML page into a fully dynamic Tumblr blog. Variables are exactly what the name suggests. Blocks, on the other hand, are a sort of step up from variables. Html hHead Basic Variables. HTML Codes - Special Characters - ASCII Table. Unicode Upside-Down Converter.

List of emoticons. A simple smiley This is a list of notable and commonly used emoticons or textual portrayals of a writer's mood or facial expression in the form of icons.

The Western use of emoticons is quite different from Eastern usage, and Internet forums, such as 2channel, typically show expressions in their own ways. In recent times, graphic representations, both static and animated, have taken the place of traditional emoticons in the form of icons. Windows Alt Key Codes. View Macintosh Accent Codes | Windows Character Map | Windows International Keyboard Codes This page list codes for accented letters and other characters. 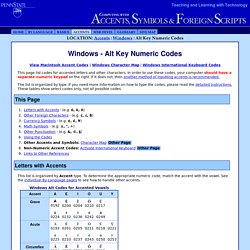 In order to use these codes, your computer should have a separate numeric keypad on the right. If it does not, then another method of inputting accents is recommended. The list is organized by type. If you need more information on how to type the codes, please read the detailed instructions. Bugmenot.com - login with these free web passwords to bypass compulsory registration. Aviary - Tools. Online Image Editor. Online converter - convert video, images, audio and documents for free. Yola - Make a Free Website. Creating A Free Website. COLOURlovers. 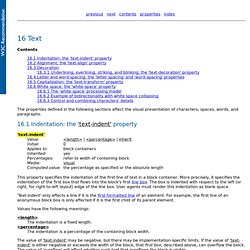 More precisely, it specifies the indentation of the first box that flows into the block's first line box. The box is indented with respect to the left (or right, for right-to-left layout) edge of the line box. How To Make Dashed Underline Hyperlink Hover With Different Colors. HOW-TO MAKE GIFS. Making Anime GifsOn Several of My sites, you might notice animated gifs from a scene from an anime or video game. 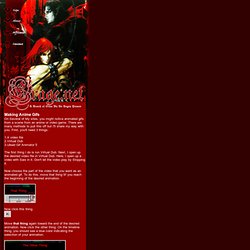 There are many methods to pull this off but I'll share my way with you. First, you'll need 3 things: 1.A video file 2.Virtual Dub 3.Ulead Gif Animator 5 The first thing I do is run Virtual Dub. Next, I open up the desired video file in Virtual Dub. Now choose the part of the video that you want as an animated gif. Now click this thing. Move that thing again toward the end of the desired animation. HOW-TO MAKE CURSORS. Making Cursors Making cursors isn’t as difficult as it sounds. 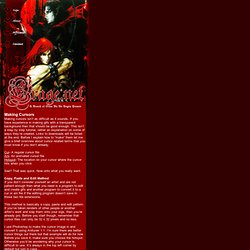 If you have experience in making gifs with a transparent background then that should be good enough. This isn’t a step by step tutorial, rather an explanation on some of ways they’re created. Links to downloads will be listed at the end. Before I explain how to “make” them let me give a brief overview about cursor related terms that you must know if you don’t already. Cur- A regular cursor file Ani- An animated cursor file Hotspot- The location on your cursor where the cursor hits when you click.