Why I adore the night. It's human to want light and warmth. 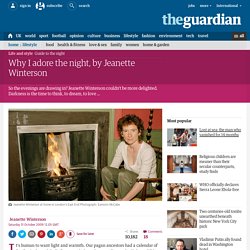 Our pagan ancestors had a calendar of fire festivals, and God's first recorded words, according to the Hebrew Bible, were: "Let there be light. " Night belongs to the dark side, literally and metaphorically: ghosts, scary monsters, robbers, the unknown. Electricity's triumph over the night keeps us safer as well as busier. But whatever extends the day loses us the dark. We now live in a fast-moving, fully lit world where night still happens, but is optional to experience. I think we should stop being night-resisters, and learn to celebrate the changes of the seasons, and realign ourselves to autumn and winter, not just turn up the heating, leave the lights on and moan a lot. Night and dark are good for us. It doesn't matter whether you are in the city or the country, as long as you can control your own little pod. Inside, the lights are going on.

To sit alone without any electric light is curiously creative. About - Jeanette Winterson. Jeanette was born in Manchester, UK, in 1959. 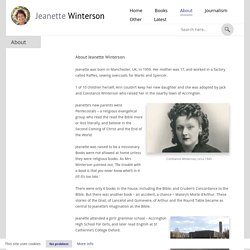 Her mother was 17, and worked in a factory called Raffles, sewing overcoats for Marks and Spencer. 1 of 10 children herself, Ann couldn’t keep her new daughter and she was adopted by Jack and Constance Winterson who raised her in the nearby town of Accrington. Constance Winterson, circa 1945. E. E. Cummings – Since feeling is first. Poetry: 'Ask for Nothing' Ask for Nothing Instead walk alone in the evening heading out of town toward the fields asleep under a darkening sky; the dust risen from your steps transforms itself into a golden rain fallen earthward as a gift from no known god. 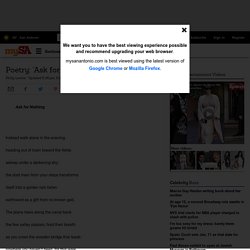 The plane trees along the canal bank. Philip Levine Travel Pouch – Academy of American Poets Shop. Even the sudden tumbling finches have fled into smoke, and the one road whitened in moonlight leads everywhere. 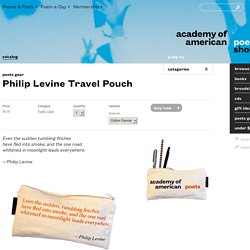 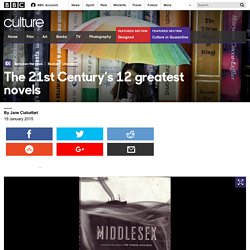 Home - Catherine Hiller. The Joy of Reading Graham Greene — The Atlantic. An interview with Pico Iyer about his latest book, a memoir about his relationship with Greene's work Random House. 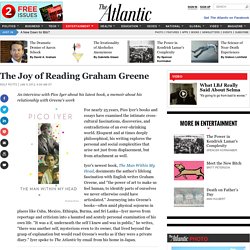 New Selected Poems - Philip Levine. BBC Believes You Only Read 6 of These Books... Modern Library 100 Best Novels. Anti-intellectualism is taking over the US. Recently, I found out that my work is mentioned in a book that has been banned, in effect, from the schools in Tucson, Arizona. 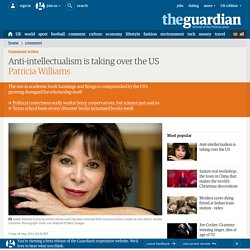 The anti-ethnic studies law passed by the state prohibits teachings that "promote the overthrow of the United States government," "promote resentment toward a race or class of people," "are designed primarily for pupils of a particular ethnic group," and/or "advocate ethnic solidarity instead of the treatment of pupils as individuals. " The Literary United States: A Map of the Best Book for Every State. Two weeks ago, we published a literary map of Brooklyn, highlighting the books we felt best represented the neighborhoods in which they were set. 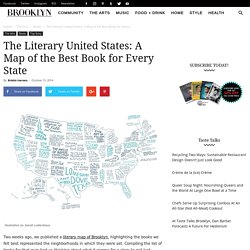 Compiling the list of books for that map had us thinking about what it means for a story to not just be from a place, but also of it, and why it is that some places have an abundance of literary riches (we’re looking at you, American South), while others, well, don’t. And we had seen other maps pairing books with states, but those maps tend to signify the fame level of the books rather than their literary merit; they also tend to be dominated by white men, most of them dead. And Margaret Mitchell. Quirky novelist Lois Leveen talks about being from mall-land, race in America and Hollywood interest in her book. Lois M. 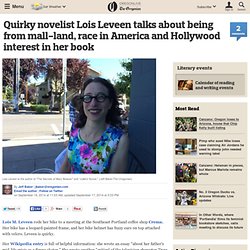 Leveen rode her bike to a meeting at the Southeast Portland coffee shop Crema. Her bike has a leopard-painted frame, and her bike helmet has fuzzy ears on top attached with velcro. Leveen is quirky. Talking JULIET’S NURSE with Lois Leveen. It’s Decorative Gourd Season, Motherfuckers. I don’t know about you, but I can’t wait to get my hands on some fucking gourds and arrange them in a horn-shaped basket on my dining room table. 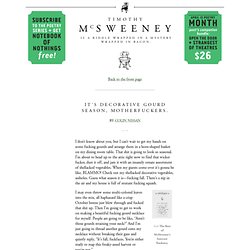