BBC Believes You Only Read 6 of These Books... 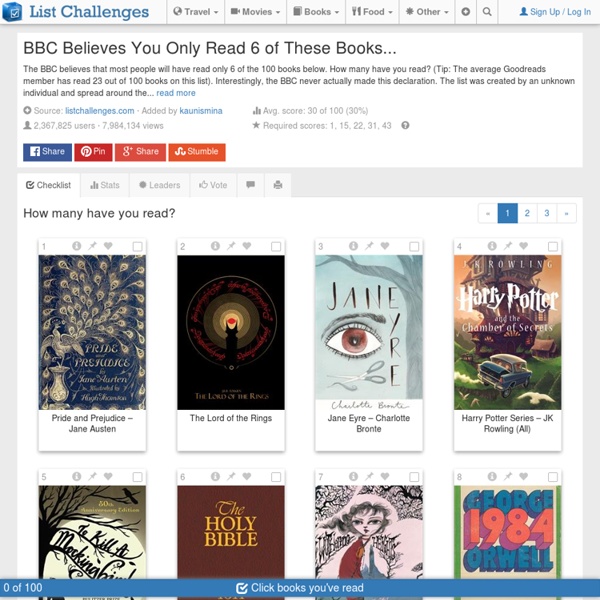 The Portable Jack Kerouac (Portable Library): Jack Kerouac, Ann Charters: 9780140178197: Amazon.com When You Want to Quit God's Calling on Your Life I made a firm decision that day. I told the Lord how desperately I wanted the fear of the Lord in my life. Pleasing the Lord rather than people became my passion. But walking out my passion was a different story. Then I would hear the sweet voice of the Lord asking me, "Is this the fear of the Lord, or is it the fear of man?" What was I going to yield to? The feelings of fear did not go away immediately. Choose to Become Unstoppable As my example shows, it is not necessary to get rid of fear before obeying the Lord. You are either a person who will be stopped or a person who won't be stopped. Today, I am so thankful that God's grace helped me press through the fears, doubts, difficulties and questions in my mind. Does that mean everything in my life is easy or without problems? I can dare to step out of the limited box that life offers me. Although my circumstances did not change, I changed on the inside. What God did for me that day, He will do for you. Read a companion devotional.

15 Books Every Young Gay Woman Should Read The Great Gay Deception In February 2007, a colleague of mine attended the annual fundraising dinner for the Human Rights Campaign (HRC), the world’s largest gay activist organization. As a Christian man deeply committed to righteousness in our nation, he wanted to see how the HRC operated firsthand. Next to him at the table was a homosexual couple, and as my friend was talking to one of the men in the couple, he suddenly had a vision—and he is not prone to such things—of a snake wrapped around the man’s neck. He knew he had to kill it before it strangled the man to death, but he also knew if he didn’t exercise extreme care in killing the snake, he would kill the man in the process. That, in vivid pictorial illustration, is the predicament we find ourselves in today in the church. How then do we stand against gay activism without hurting our witness to gay individuals? Reach Out and Resist In January 2005, the Lord spoke this word to my heart: “Reach out and resist.” Really? The War on the Bible The War on Gender

Medieval Sumptuary Laws - Legislation of the Middle Ages regarding excessive expenditure The medieval world wasn't all drab clothing, flavorless food, and dark, drafty castles. Medieval folk knew how to enjoy themselves, and those who could afford it indulged in dazzling displays of wealth -- sometimes to excess. Sumptuary laws originated to address this excess. The Lavish Life of the Nobility The upper classes took particular pleasure and pride in garbing themselves in luxurious finery. It was expected of the lord of the manor or castle to throw great feasts on special occasions, and nobles vied with each other to see who could offer the most exotic and abundant foodstuffs. And anyone who could afford to build or hold a castle could also afford to make it warm and welcoming, with opulent tapestries, colorful draperies, and plush furnishings. These ostentatious displays of riches concerned the clergy and the more pious secular rulers. So, in some countries and at various times, sumptuary laws were passed to limit conspicuous consumption. Sumptuous Women