Stop Saying Uber Is Part Of The Sharing Economy 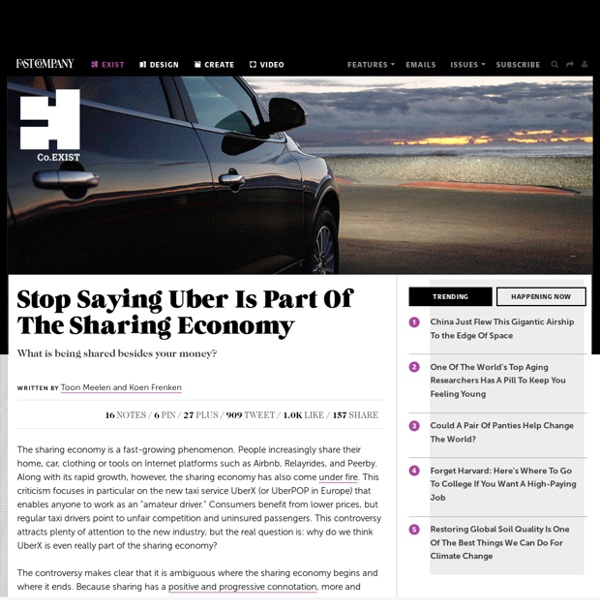 The sharing economy is a fast-growing phenomenon. People increasingly share their home, car, clothing or tools on Internet platforms such as Airbnb, Relayrides, and Peerby. Along with its rapid growth, however, the sharing economy has also come under fire. This criticism focuses in particular on the new taxi service UberX (or UberPOP in Europe) that enables anyone to work as an "amateur driver." Consumers benefit from lower prices, but regular taxi drivers point to unfair competition and uninsured passengers. The controversy makes clear that it is ambiguous where the sharing economy begins and where it ends. When looking at Uber, we can distinguish different services. It is another service of Uber, UberX, that spurred the most controversy. Finally, Uber also recently initiated the service UberPool in San Francisco. A similar confusion exists around Airbnb, the platform that allows people to rent out their home. [Top photo: Car Culture/Getty Images] Related:  Uber

The Sharing Economy Is On The Brink Of Disrupting Business Travel Editor’s note: Dan Ruch is the founder and CEO of Rocketrip. The foundations of the business-travel ecosystem are under more strain than ever before. U.S. companies are projected to spend $310 billion on business travel in 2015 (up 6.2 percent from last year), but how they spend that money has become a source of tension and uncertainty. Sharing-economy startups like Airbnb and Uber are challenging traditional travel vendors – and in the process, they’re forcing many businesses to reevaluate travel policies and conventions that are pillars of the current system. The corporate travel ecosystem is traditionally powered by relationships between travel managers and travel providers, the latter of which includes travel-management companies, airlines, hotel chains and rental car companies. Although these relationships can save companies tons of money and improve quality of life for business travelers, many employees see corporate travel policies as a hindrance.

What If Uber Were a Unionized, Worker-Owned Co-Op? These Denver Cabbies Are Making It Happen by Mary Hansen Wolde Gebremariam is one of more than 160,000 people nationwide who drive their own cars for Uber. Based in Denver, Gebremariam, age 28, drives his Chevy SUV for the company and occasionally works as a private limo driver. “The labor movement has to bring ownership and equity into the picture.” Uber built its $40 billion business around a mobile-based application that connects drivers with riders. Hailed by some for shaking up a stagnant taxi industry, others criticize the company for how it treats drivers, who pay for their own cars, gas, and maintenance. It’s also been criticized for dictating rates and for deactivating drivers’ accounts, essentially firing them, without warning. The ride-hailing app company may be innovative from the perspective of its customers—and its owners—but for the driver the experience is very similar to that of a traditional taxi driver, as Gebremariam can attest. That’s how he thought it would work, anyway. Gebremariam isn’t just complaining about it.

Airbnb and Uber Are Just the Beginning. What's Next for the Sharing Economy. - The Mark Consulting If you look at Uber’s financials, you might not realize that 2014 was a rough year for the company’s image. Despite being less than six years old, Uber is projected to earn $10 billion in gross revenue this year, and the company was recently valued at $40 billion. This success certainly doesn’t reflect the company’s ability to foster love from drivers and local governments. Globally, the sharing economy’s size in five key sectors was approximately $15 billion in 2014. The idea behind the sharing economy isn’t new. These pioneering companies created affordable solutions for cash-strapped consumers during the Great Recession, and they offered unique income streams for people who needed extra money or flexible work schedules. These benefits made people more willing to take risks — riding in a stranger’s car or trusting vacationers with their homes — and created a generation of sharers. The sharing economy’s story doesn’t end with taxis and vacation rentals. Who Exactly Are Uber’s Drivers?

Uber Drivers Say They're Making Less Than Minimum Wage Pablo Blazquez Dominguez/Stringer/Getty Images Uber likes to tell the world that the median salary for UberX drivers is ~$90,000 per year in New York. Turns out that number might be a bit of an exaggeration. We spoke with more than a dozen Uber drivers to see how much money they were making, and none of the numbers they gave were even close to $90,000. In fact, a few drivers said they were struggling to even earn the minimum wage. The drivers we spoke with say they're making anywhere from $5 an hour to $20 an hour, meaning that in a year's time, if they're working 40-hour weeks, they could be making anywhere between $10,000 to $41,000. A big part of the reason drivers are struggling to hit $90,000 is that this summer Uber cut the price of an UberX ride by 20% across the country. UberX is Uber's cheapest option. For consumers, the discount was great news. The 20% discount was introduced as a short-term plan to boost demand and awareness.

This is Uber's playbook for sabotaging Lyft Uber is arming teams of independent contractors with burner phones and credit cards as part of its sophisticated effort to undermine Lyft and other competitors. Interviews with current and former contractors, along with internal documents obtained by The Verge, outline the company’s evolving methods. Using contractors it calls "brand ambassadors," Uber requests rides from Lyft and other competitors, recruits their drivers, and takes multiple precautions to avoid detection. Together, the interviews and documents show the lengths to which Uber will go to halt its rivals’ momentum. After The Verge asked Uber for comment on its report, the company stalled for time until they could write this blog post introducing Operation SLOG to the world. ‘A special ongoing project’ Earlier this month, CNN reported that Uber employees around the country ordered and then canceled 5,560 Lyft rides, according to an analysis by Lyft. "Uber is flat-out lying to their customers." Organizing a street team

The real promise of the ‘sharing economy’ is what it could do for the poor Some of the cars available for rental on Getaround today. Via the Getaround website. The sharing economy often feels like a place full of well-off Millennials, digital natives who have smartphones, credit cards and reliable Internet connections. You need a certain amount of online savvy to rent a spare room on the Internet, not too mention the extra income to use Uber instead of the bus. This picture of who's doing the sharing in the sharing economy today makes this argument from NYU's Samuel Fraiberger and Arun Sundararajan provocative: In the long run, they argue in a new paper, the people who stand to benefit the most from new peer-to-peer rental marketplaces for everything from cars to gadgets are low-income consumers. They repeatedly found that result in a model they developed, using data from the car-rental service Getaround, to test how the sharing economy will change ownership patterns and asset prices, and who these marketplaces will benefit as they expand.

Understanding “New Power” We all sense that power is shifting in the world. We see increasing political protest, a crisis in representation and governance, and upstart businesses upending traditional industries. But the nature of this shift tends to be either wildly romanticized or dangerously underestimated. There are those who cherish giddy visions of a new techno-utopia in which increased connectivity yields instant democratization and prosperity. Both views are wrong. Old power works like a currency. New power operates differently, like a current. The battle and the balancing between old and new power will be a defining feature of society and business in the coming years. New Power Models Power, as British philosopher Bertrand Russell defined it, is simply “the ability to produce intended effects.” Old power models tend to require little more than consumption. Sharing and shaping. Facebook is the classic example of a new power model based on sharing and shaping. Funding. Producing. Co-ownership. New Power Values

Uber, Airbnb and consequences of the sharing economy: Research roundup The leading businesses that are advancing the concept of the “sharing economy” are in many respects no longer insurgents and newcomers. The size and scale of Uber, Airbnb and several other firms now rival, or even surpass, those of some of the world’s largest businesses in transportation, hospitality and other sectors. As the economic power of these technology-driven firms grows, there continue to be regulatory and policy skirmishes on every possible front, across cities and towns spanning the United States, Europe and beyond. The Economics and Statistics Administration of the U.S. The implications of the sharing economy — part of what has also been termed the “gig economy” — have of course been hotly debated in the news media, and the research world has been steadily weighing in with deeper analysis. There is the distinct danger, on both sides, of overstating the case and the size of effects. Fights over rules and regulations Latest research “Does the Sharing Economy Do Any Good?”

At the Uber for home cleaning, workers pay a price for convenience Anthony Walker travels an hour and a half for a two-and-a-half-hour job for Homejoy, a cleaning services Web start-up. (Lydia DePillis/The Washington Post) It’s 7:45 a.m., and 4-year-old Cheyenne skips out the door of her squat apartment complex in Southeast Washington, D.C., stamping her feet to make the lights in her sneakers twinkle. It’s just a two-and-a-half-hour shift: Some busy professional on the other side of the city had requested housecleaning from an online start-up called Homejoy. “These are all ‘ifs.’ The bus chugs into downtown, slowing to a crawl as it hits the morning rush hour. At the end of a five-hour trip back and forth, averaged out, he has made $10 an hour, without any taxes being withheld, as they would be if he were an employee. That’s the tradeoff in moving toward independent contracting in the service economy, where people order services online just as they would order batteries or a pair of shoes. Every start-up has an origin story, and Homejoy’s is classic.

The Shut-In Economy — Matter In 1998, Carnegie Mellon researchers warned that the internet could make us into hermits. They released a study monitoring the social behavior of 169 people making their first forays online. The web-surfers started talking less with family and friends, and grew more isolated and depressed. “We were surprised to find that what is a social technology has such anti-social consequences,” said one of the researchers at the time. We’re now deep into the bombastic buildout of the on-demand economy— with investment in the apps, platforms and services surging exponentially. Many services promote themselves as life-expanding — there to free up your time so you can spend it connecting with the people you care about, not standing at the post office with strangers. GrubHub’s advertising banks on us secretly never wanting to talk to a human again: “Everything great about eating, combined with everything great about not talking to people.” Basically, people a lot like herself.