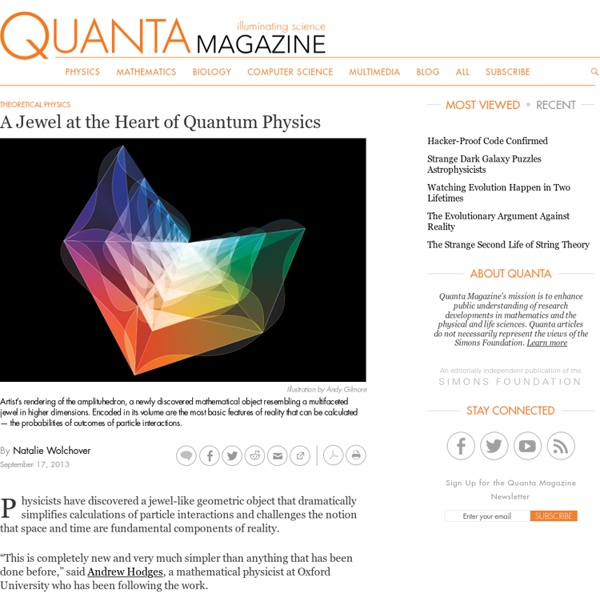 Physicists have discovered a jewel-like geometric object that dramatically simplifies calculations of particle interactions and challenges the notion that space and time are fundamental components of reality. “This is completely new and very much simpler than anything that has been done before,” said Andrew Hodges, a mathematical physicist at Oxford University who has been following the work. The revelation that particle interactions, the most basic events in nature, may be consequences of geometry significantly advances a decades-long effort to reformulate quantum field theory, the body of laws describing elementary particles and their interactions. Interactions that were previously calculated with mathematical formulas thousands of terms long can now be described by computing the volume of the corresponding jewel-like “amplituhedron,” which yields an equivalent one-term expression. Locality is the notion that particles can interact only from adjoining positions in space and time. Related:  physics • Physics

The Fermi Paradox - Wait But Why PDF: We made a fancy PDF of this post for printing and offline viewing. Buy it here. (Or see a preview.) Everyone feels something when they’re in a really good starry place on a really good starry night and they look up and see this: Some people stick with the traditional, feeling struck by the epic beauty or blown away by the insane scale of the universe. Personally, I go for the old “existential meltdown followed by acting weird for the next half hour.” Physicist Enrico Fermi felt something too—”Where is everybody?” A really starry sky seems vast—but all we’re looking at is our very local neighborhood. Galaxy image: Nick Risinger When confronted with the topic of stars and galaxies, a question that tantalizes most humans is, “Is there other intelligent life out there?” As many stars as there are in our galaxy (100 – 400 billion), there are roughly an equal number of galaxies in the observable universe—so for every star in the colossal Milky Way, there’s a whole galaxy out there. 1. 2.

Experiment 7 - Rotation and Gyroscopic Precession | UCLA Physics & Astronomy Shown in the picture below: Pasco gyro assembly with rotation sensor on base Support rod and clamp for gyro Not shown in the picture above: Rotator with movable weights on stand with rotation sensor Vernier calipers Pan balance to weigh add-on weight Meter stick Weight hanger and weights Digistrobe String to spin wheel Computer and Science Workshop Interface This experiment consists of two parts. Part 1 is a relatively straightforward measurement of the angular acceleration produced by different torques on an apparatus with variable rotational inertia. Most students cannot complete these two parts in one lab session, so you should choose which part you would like them to perform. We are all aware that a massive wheel has rotational inertia. Automobile piston engines use a flywheel for this very purpose. We also have an intuitive idea of torque, the tendency of a force to rotate a body. Consider a small mass m at a distance from the rotation axis. or We recognize the torque in vector form .

Earth - Why there could be many identical copies of you This story is nominated for a Webby Award for Best Film & Video. Vote here. BBC Earth is also nominated for a Webby, for Best Science Website. Vote here. In theory this is not the only Universe that might exist, and in many others, identical copies of us can be found. The question is, how do we get there? BBC Earth's Melissa Hogenboom goes on the hunt for her cosmic twin.

How To Identify That Light In The Sky? What is that light in the sky? Perhaps one of humanity’s more common questions, an answer may result from a few quick observations. For example — is it moving or blinking? SEE ALSO: Night on Earth: biggest cities without power Still unsure? NORDTVEDT'S REMARKS ON GRAVITOMAGNETISM The literature of any field of study spans the range from awful to outstanding. And once in a long while a paper is published that is a true jewel, one that is written with crystal clarity that goes to the heart of a truly fundamental issue with little or no accompanying clutter to distract your attention from what's really important. Much has been written on the origin of inertia and Mach's principle in the past century, some of it outstandingly good. But there have only been a few jewels. Dennis Sciama's paper in the Monthly Notices of the Royal Astronomical Society back in 1953 is one. Another is Derek Raine's 1981 paper in Reports of Progress in Physics where he showed that Sciama's account of inertial reaction forces follows from general relativity theory in all isotropic cosmological models. Frame dragging is a clear Machian effect since rotation takes place with respect to the very distant matter in the universe. , the condition is: making equal to a. . particle, where [or

PHYSICS MANIA: Three Reasearch Papers The world is full of mystry but one of such mystry of nature was given by Einstein Sir in the mathematical form. The theory or the mystry is non other than Theory of relativity. The world knows that it had contributed lot in the field of science that all science graduates are knowing it but the thing is I want all to understand this in the simpler form. So all will feel comfortable with the subjects like science and may some day new existance of modern Einstein Sir. His contribution is giving us so many facilities that without him some of the things which were never known. There are so many things which are following such principles as use of nuclear energy, photo energy, cosmology. The year 1905 also called to be a miracle year for science.

TRANSIENT MASS FLUCTUATIONS If you've read the linked documents "The Origin of Inertia" and "Radiation Reaction", you're ready to take on transient mass fluctuations. From "Radiation Reaction" you know that electromagnetic radiative processes are accompanied by reaction forces on the radiating charges that involve violations of causality and instantaneous violations of energy and momentum conservation. To the extent that gravity is like electromagnetism then, similar processes might reasonably be expected. If we take gravity to be only those forces that are described by Newtonian gravity, then these notions are perfectly reasonable. Moreover, even plain old inertial reaction forces are radiative. signature of electromagnetic radiation reaction forces, lowest order inertial reaction forces already have the imprint of radiation reaction. To talk about matter and its interactions with "fields" we're going to require some mathematical formalism. This operation is important because of a theorem proved by Gauss. . 1. .

Quantum Theory Sheds Light On What Happens When We Die: The Afterlife We're creating viewer supported news. Become a member! The biggest question so many of us have in life, one that we have been seeking to answer for years, is what happens when we die? Even modern day science seeks to answer this question. Asking these questions is fundamental to understanding the true nature of our reality, and with quantum physics gaining more popularity, questions regarding consciousness and its relationship to human physicality become increasingly relevant. Max Planck, the theoretical physicist credited with originating quantum theory — a feat that won him the Physics Nobel Prize in 1918 — offers perhaps the best explanation for why understanding consciousness is so essential: “I regard consciousness as fundamental. Eugene Wigner, also a theoretical physicist and mathematician, stated that it’s not possible to “formulate the laws of quantum mechanics in a fully consistent way without reference to consciousness.” Does Consciousness Move on After Death? R.C. – Dr.

Time Machines and Event Horizons » Undivided Looking I've written a pop-article about Time Machines and Event Horizons, which has appeared on the Scientific American blog Critical Opalescence. George Musser, my host, is an editor at Scientific American, and kindly gave me this opportunity to talk about some of my ideas in my article, The Generalized Second Law implies a Quantum Singularity Theorem. If you have any questions about the physics in the article, please feel free to leave comments on this post here. (Questions left on the Scientific American website will be answered in the comments to this post, if anywhere.) I am a postdoctoral researcher studying quantum gravity and black hole thermodynamics at the Institute for Advanced Study in Princeton.

Overview The existence of transient mass fluctuations in objects subjected to large accelerations and rapid changes in acceleration depends upon "Mach's principle" and some peculiarities of "radiation reaction" forces. Mach's principle is the assertion that the physical origin of all inertial reaction forces is an interaction of the object with chiefly the most distant matter in the universe. (Inertial reaction forces are those things that push back on you when you push on stuff.) Radiation reaction forces are experienced by charged objects as they "launch" energy in the form of radiation when they are accelerated by external forces. (These are recoil forces, like those experienced when "launching" bullets out of a gun in your hand.) The main document is kept free of detailed arguments and mathematics so that the conceptual argument is relatively unencumbered by technical details. What is the origin of inertia? But radiative interactions propagate at the speed of light. Good question. So what?

Nothing Is Solid & Everything Is Energy – Scientists Explain The World Of Quantum Physics Nothing is solid and everything is energy! It has been written about before, over and over again, but cannot be emphasized enough. The world of quantum physics is an eerie one, one that sheds light on the truth about our world in ways that challenge the existing framework of accepted knowledge. What we perceive as our physical material world, is really not physical or material at all, in fact, it is far from it. Related Article: Quantum Theory Proves That Consciousness Moves To Another Universe After Death “If quantum mechanics hasn’t profoundly shocked you, you haven’t understood it yet. At the turn of the nineteenth century, physicists started to explore the relationship between energy and the structure of matter. “Despite the unrivaled empirical success of quantum theory, the very suggestion that it may be literally true as a description of nature is still greeted with cynicism, incomprehension and even anger.” Related Article: 12 Signs That You Are Experiencing a Spiritual Awakening