The 100 Best Children's Books of All Time 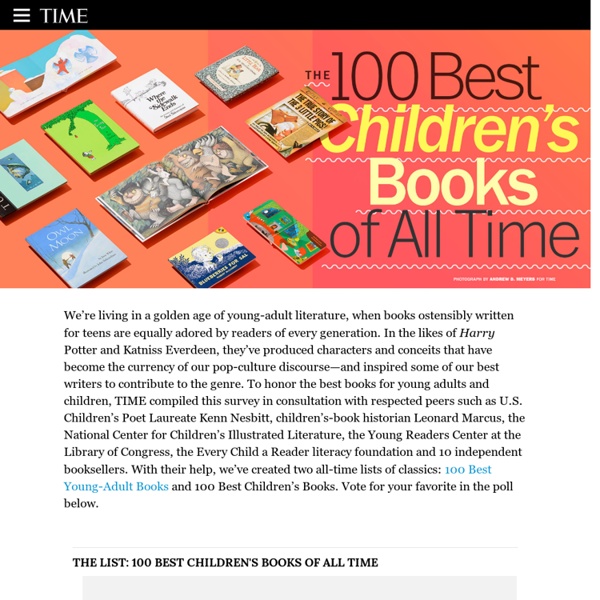 Top 10 first lines in children's and teen books | Children's books The boy and the old man arrived at the port at night. That's the first line in my debut novel, Close to the Wind, and I'm rather proud of it. The line doesn't shout out at you, but it does a lot of work establishing the tone of the book and giving you the setting and characters without any fuss. It's always difficult to know how to begin a book. Originally, I had a much bolder first line but during an editorial meeting it was suggested I lose it and start with the second line in. Of course, I objected. An opening sentence should draw the reader from their own head and take them somewhere completely different. It was a dark, blustery afternoon in spring, and the city of London was chasing a small mining town across the dried out bed of the old North Sea. 1. Is this the best ever opening line from a children's book? The first thing you find out when yer dog learns to talk is that dogs don't got nothing much to say. 2. A great book that's all about the voice and he nails it in the first line.

The Cartoon Introduction to Economics, Volume 1: Microeconomics : Stand-Up Economist Ask your local bookstore for my new book (co-authored with Grady Klein), or you can order it for just $12 from Amazon.com or B&N. (PS to buyers and bloggers: Please use the links above: at no extra cost to you, a few more pennies go to me instead of Jeff Bezos.) Update: Volume Two: Macroeconomics came out in Jan 2012! Scroll down for excerpts, reviews, corrections, and information for teachers, including page notes and PPTs! Comedy/book tour Details about upcoming shows here, please contact me to bring economics comedy to your school, corporate event, or comedy club! Excerpts Below is one of my favorite chapters! Reviews From the back cover of the book: “Learning economics should be fun. Reviews on the web (I’ll add more as they cross my desk) include kind words from Univ of Chicago econ department chair Harald Uhlig (who writes on Amazon that “This is a wonderful and humorous introduction to microeconomics!”) Corrections Information for teachers Detailed page notes (and haiku summaries!)

Aotearoa Reads Details | New Zealand Book Council When Stuff published 50 books every kid should read by age 12, the Book Council staff started talking about NZ books we loved as kids, and NZ books that the kids in our lives love. We compiled a (very subjective) list of 50 NZ books we think every Kiwi kid should read before they're 12. We're not making any high claims of this being THE list. (What even is THE list?) This is just a selection of books we’ve been talking about in the office lately - more of a jumping off point to start a conversation about what NZ books us Kiwis think are important for our kids. We’d really love to hear your thoughts! Top three - Mahy, Cowley and Gee Margaret Mahy, Joy Cowley and Maurice Gee are the holy trinity when it comes to NZ children's authors. 4. Okay, we also bent the rules and gave Donovan two books - they're equally amazing and we have so many nieces/nephews/cousins who are obsessed with these two classics! 5. 6. 7. 8. 9. 10. 11. 12. 13. 14. 15. 16. 17. 18. 19. 20. 21. 22. 23. 24. 25. 26. 27. 28.

My hero: Mary Shelley by Neil Gaiman The cold, wet summer of 1816, a night of ghost stories and a challenge allowed a young woman to delineate the darkness, and give us a way of looking at the world. They were in a villa on the shores of Lake Geneva: Lord Byron – the bestselling poet, too dangerous for the drawing rooms of England and in exile; his doctor, John William Polidori; Percy Shelley, poet and atheist, and his soon-to-be wife, 18-year-old Mary Shelley. Ghost stories were read, and then Byron challenged everyone in the group to come up with a new story. He started, but did not finish, one about vampires; Polidori completed "The Vampyre"; and young Mary, already the mother of a living child and a dead one, imagined a story about a man who fabricated a living creature, a monster, and brought it to life. Ideas happen when the time is right for them. Brian Aldiss points to Frankenstein as the first work of science fiction (which he defines as hubris clobbered by nemesis) and he may be right.

Notable Children's Books - 2017 | Association for Library Service to Children (ALSC) Each year a committee of the Association for Library Service to Children (ALSC) identifies the best of the best in children's books. According to the Notables Criteria, "notable" is defined as: Worthy of note or notice, important, distinguished, outstanding. As applied to children's books, notable should be thought to include books of especially commendable quality, books that exhibit venturesome creativity, and books of fiction, information, poetry and pictures for all age levels (birth through age 14) that reflect and encourage children's interests in exemplary ways. According to ALSC policy, the current year's Newbery, Caldecott, Belpré, Sibert, Geisel, and Batchelder Award and Honor books automatically are added to the Notable Children's Books list. Younger Readers Ada Lovelace, Poet of Science: The First Computer Programmer. This engaging biography introduces nineteenth-century scientist Ada Lovelace, who developed the first algorithm used by the world’s early computers. Counting.

While Some Are Shocked by ‘Go Set a Watchman,’ Others Find Nuance in a Bigoted Atticus Finch “Whether you’ve read the novel or seen the film, there’s this image you have of Atticus as a hero, and this brings him down a peg,” said Adam Bergstein, an English teacher in Queens whose 10th- and 11-grade students read “Mockingbird.” “How do you take this guy who everybody looked up to for the last 50-plus years, and now he’s a more flawed individual?” In this version, Atticus is 72 years old, suffering from arthritis and stubbornly resistant to social change. He stands in sharp contrast to the gentle scholar in “Mockingbird,” who tells Scout, when explaining why he has gone out on a limb to defend a black man, that “I do my best to love everybody.” In “Watchman,” which comes out Tuesday, Atticus chides Scout for her idealistic views about racial equality: “The Negroes down here are still in their childhood as a people.” After the initial shock, some writers and literary critics see added value in a more complex, and flawed, version of Atticus. Photo It is unclear why Ms. Ms. While A.

School reading list: recommended reading books for children 70+ book picks from TED speakers and attendees The tables in bookstores can be overwhelming: Every book cover looks appealing, every blurb glows with praise. Sometimes, you just need a recommendation from a human, someone you trust. Below, 10 members of the TED community — with very different points of view — share the books they think you’ll enjoy this summer. Their selections are wonderfully untethered to new releases and bestsellers, with a little something for everyone. Mind-bending fiction, picked by David Eagleman David Eagleman is a neuroscientist whose sensory vest may just expand the limits of human perception. Labyrinths by Jorge Luis Borges. The Bear by William Faulkner. The Most Human Human: What Artificial Intelligence Teaches Us About Being Alive by Brian Christian. The Arrival by Shaun Tan. Invisible Cities by Italo Calvino. The Amazing Adventures of Kavalier & Clay by Michael Chabon. Last and First Men by Olaf Stapledon. Things That Are: Essays by Amy Leach. Books on art and race, picked by Anne Pasternak

Book Modules | Teaching Children Philosophy Ready to try your hand at having a philosophical discussion with children? To help you out, we’ve assembled all the materials you’ll need to do so, except the books. Most of the modules were created by students in Tom Wartenberg’s Philosophy for Children class at Mount Holyoke College. For each story or book, you will find a summary of the plot, a discussion of the main philosophical issues raised by the books, and a series of questions that can be used to initiate philosophical discussion of the story or book with children. Many have been edited by Jayme Johnson and Tom. These are just suggestions for you to think about, so don’t feel bound by them. In addition to the alphabetical listing below, book modules can be accessed through categories. The main categories are aesthetics, epistemology, ethics, existentialism, logic, metaphysics, multiculturalism, language, the mind, religion, and society. Each of these category pages also contains subcategories for more specific issues.

12 Banned Books Every Woman Should Read While it would be great if we were past the whole “banning books” thing, the fact remains that hundreds of books have their places in libraries or on school reading lists challenged each year. According to the American Library Association, books are most commonly challenged for being “sexually explicit” or containing “offensive language.” But some of the books that are most often challenged are also literary classics, containing storylines that almost everyone can learn from. In honor of Banned Books Week 2014, we’ve pulled together a list of controversial books that every woman should read. They cover sexual freedom and women pushing back against prescribed roles, oppression against women and people of color, and what it means to be a woman in different places and times. Above all, they are stories well told. Here are 12 banned, censored and commonly challenged books every woman (and person) should read: