7 cultural concepts we don't have in the U.S. 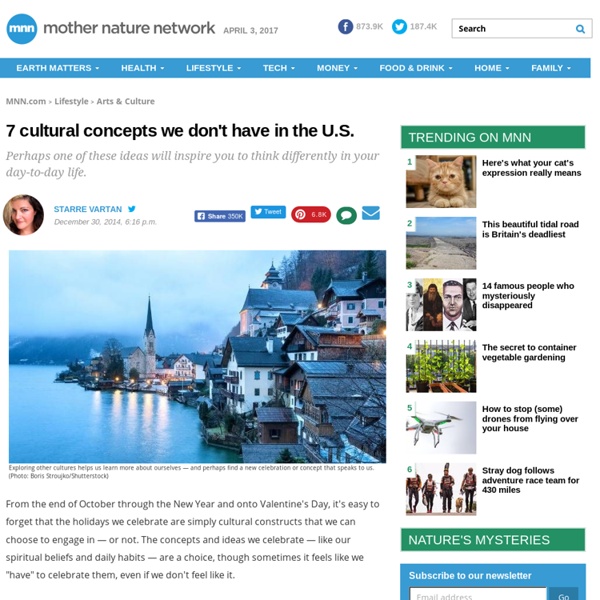 From the end of October through the New Year and onto Valentine's Day, it's easy to forget that the holidays we celebrate are simply cultural constructs that we can choose to engage in — or not. The concepts and ideas we celebrate — like our spiritual beliefs and daily habits — are a choice, though sometimes it feels like we "have" to celebrate them, even if we don't feel like it. Culture is ours to do with as we choose, and that means that we can add, subtract, or edit celebrations or holidays as we see fit — because you and me and everyone reading this makes up our culture, and it is defined by us, for us, after all. If you want to add a new and different perspective to your life, there are plenty of other ways to recognize joy and beauty outside American traditions. Friluftsliv A hiker sits atop Trolltunga, or 'troll's tongue,' a famous rock formation in southwestern Norway. Friluftsliv translates directly from Norwegian as "free air life," which doesn't quite do it justice. Hygge

Ten phrases you'll only hear at work in Sweden Sweden has strong gender equality in the workplace. Photo: Cecilia Larsson/Image Bank Sweden Sweden's global reputation as a hub for gender equality, efficiency and work-life balance can also result in some baffling conversations for those new to doing business with Swedes. Here's The Local's guide to the ten catchphrases all foreign workers need to know.

urticator.net - Excerpts from Uncleftish Beholding For most of its being, mankind did not know what things are made of, but could only guess. With the growth of worldken, we began to learn, and today we have a beholding of stuff and work that watching bears out, both in the workstead and in daily life. The underlying kinds of stuff are the firststuffs, which link together in sundry ways to give rise to the rest. Formerly we knew of ninety-two firststuffs, from waterstuff, the lightest and barest, to ymirstuff, the heaviest. Now we have made more, such as aegirstuff and helstuff. The firststuffs have their being as motes called unclefts.

proverbs TRADITIONAL PROVERBS: A barking dog never bites. A bird in the hand is worth two in the bush A fool and his money are soon parted. A friend in need is a friend indeed. More Swedes go abroad to escape daily stress Travellers at Arlanda airport. Photo: Henrik Montgomery/TT Growing numbers of Swedes are planning to spend extra kronor on holidays abroad – to escape the stress of living in the country, known for enjoying the best work-life balance in the world. Holidaying in foreign nations is becoming increasingly important to the Swedes, according to research by pollsters Novus on behalf of Swedavia, the organization that manages Sweden's airports. "They say in the survey that they want more time for their family, they feel that their daily life is stressful and they want to get away to recharge the batteries," market director Elisabeth Axtelius told the TT newswire on Wednesday. One in four of the 2,229 respondents told interviewers they had spent more than 50,000 kronor ($5,840) on holidays beyond the borders of Sweden in the past year.

Does the rise of English mean losing knowledge? By Matt Pickles . Image copyright Thinkstock Are we "losing knowledge" because of the growing dominance of English as the language of higher education and research? Attend any international academic conference and the discussion is likely to be conducted in English. The 101 Most Useful Websites on the Internet Here are some of the most useful websites on the internet that you may not know about. These web sites, well most of them, solve at least one problem really well and they all have simple web addresses (URLs) that you can memorize thus saving you a trip to Google. And if you find this list useful, also check out the expanded version – The Most Useful Websites – which now offers a collection of 150+ undiscovered and incredibly useful websites to enhance your productivity.

How Powerful Is Your Passport? Head back to the main site for more GOOD. Infographics A graphical exploration of the data that surrounds us ←Back to PostSee More What Orwell can teach us about the language of terror and war At first sight, it seems hard to imagine a more unlikely pairing than George Orwell and Thomas Merton. Orwell had a profound dislike of Roman Catholic writers (though he accorded a grudging respect to Evelyn Waugh as a literary craftsman), and, had he encountered Merton – especially his earlier work – he would undoubtedly have recoiled. Not that Merton, whose centenary is this year, was a conventional religious writer. He became a Catholic in 1938 after a distinctly rackety youth, and spent most of the rest of his life as a Trappist monk in the US. But he wrote copiously, corresponding with a wide range of literary figures, including Henry Miller, James Baldwin, Czesław Miłosz, Boris Pasternak and several Latin American poets, some of whose work he also translated; another surprising friend was Joan Baez. This is where the conversation with Orwell might begin.

Research by E. Robert Schulman Charlottesville, Virginia Abstract We (meaning I) present observations on the scientific publishing process which (meaning that) are important and timely in that unless I have more published papers soon, I will never get another job.

The Icelandic Passport is the Eighth Best in the World How powerful is the Icelandic passport? How good is your passport? Holders of Icelandic passports can travel to 165 countries without a visa - making it the 7th best in the world. Words matter in ‘ISIS’ war, so use ‘Daesh’ The militants who are killing civilians, raping and forcing captured women into sexual slavery, and beheading foreigners in Iraq and Syria are known by several names: the Islamic State in Iraq and al-Sham, or ISIS; the Islamic State in Iraq and the Levant, or ISIL; and, more recently, the Islamic State, or IS. French officials recently declared that that country would stop using any of those names and instead refer to the group as “Daesh.” The Obama Administration should switch to this nomenclature, too, because how we talk about this group is central to defeating them. Advertisement Whether referred to as ISIS, ISIL, or IS, all three names reflect aspirations that the United States and its allies unequivocally reject. Political and religious leaders all over the world have noted this.

Worlds Most Isolated Tribe – Enter Their Mysterious Island & They’ll Kill You! Introducing the Sentinelese people. They’ve been kicking around this beautiful island for a whopping 60,000 years. They inhabit a tiny island in The Indian Ocean which is estimated to be approximately the size of Manhattan. From the sky it appears to be an idyllic island with amazing beaches and a dense forest, but tourists or fishermen don’t dare to set foot on this island, due to its inhabitants’ fearsome reputation.