The Dalai Lama’s Daily Routine and Information Diet. By Maria Popova “To understand the Dalai Lama … perhaps it’s most useful to see him as a doctor of the soul.” 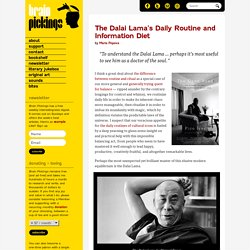 I think a great deal about the difference between routine and ritual as a special case of our more general and generally trying quest for balance — ripped asunder by the contrary longings for control and whimsy, we routinize daily life in order to make its inherent chaos more manageable, then ritualize it in order to imbue its mundanity with magic, which by definition violates the predictable laws of the universe. I suspect that our voracious appetite for the daily routines of cultural icons is fueled by a deep yearning to glean some insight on and practical help with this impossible balancing act, from people who seem to have mastered it well enough to lead happy, productive, creatively fruitful, and altogether remarkable lives. Perhaps the most unexpected yet brilliant master of this elusive modern equilibrium is the Dalai Lama. The Dalai Lama by Manuel Bauer. Putting the Dalai Lama's Lessons to the Test

Overwhelmingly, people say they love the Dalai Lama because of his integrity. 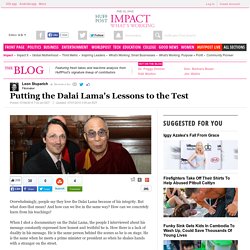 But what does that mean? And how can we live in the same way? How can we concretely learn from his teachings? When I shot a documentary on the Dalai Lama, the people I interviewed about his message constantly expressed how honest and truthful he is. How there is a lack of duality in his message. My first morning back from my 2-week long pilgrimage for peace, I am buying morning coffees when I realize: I messed up. Photo Credit: Leon Stuparich I wanted seeing my kids to be the first thing I did when I returned. 25 Life Changing Lessons to Learn from Buddha. “If we could see the miracle of a single flower clearly, our whole life would change.” ~ Buddha There are so many beautiful, powerful and life changing lessons I have learned from studying Buddhism and from reading many of Buddha’s quotes. 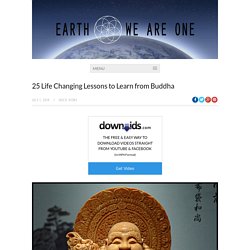 Is this the world's happiest man? Brain scans reveal French monk found to have 'abnormally large capacity' for joy, and it could be down to meditation. Brain scans reveal Buddhist monk Matthieu Ricard has largest capacity for happiness ever recordedMeditation 'completely changes your brain and therefore changes what you are', says 66-year-oldHe says you can do it too by learning how to let your thoughts drift By Claire Bates Published: 10:41 GMT, 31 October 2012 | Updated: 14:32 GMT, 31 October 2012 Ricard: 'Meditation is not just blissing out under a mango tree but it completely changes your brain' A French genetic scientist may seem like an unusual person to hold the title - but Matthieu Ricard is the world's happiest man, according to researchers. 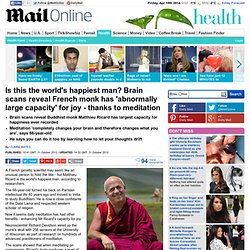 The 66-year-old turned his back on Parisian intellectual life 40 years ago and moved to India to study Buddhism. Now it seems daily meditation has had other benefits - enhancing Mr Ricard's capacity for joy. The logic of Buddhist philosophy – Graham Priest. Western philosophers have not, on the whole, regarded Buddhist thought with much enthusiasm. 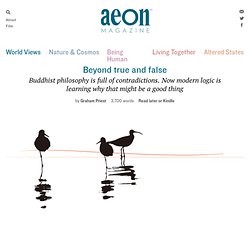 As a colleague once said to me: ‘It’s all just mysticism.’ This attitude is due, in part, to ignorance. But it is also due to incomprehension. When Western philosophers look East, they find things they do not understand – not least the fact that the Asian traditions seem to accept, and even endorse, contradictions. Thus we find the great second-century Buddhist philosopher Nagarjuna saying:The nature of things is to have no nature; it is their non-nature that is their nature. Popular now The logic of Buddhist philosophy goes beyond simple truth What happens when libertarians try to build a new society? Everything the Buddha Ever Taught in 2 Words.

When asked to sum the Buddha’s teachings up in one phrase, Suzuki Roshi simply said, “Everything changes.” 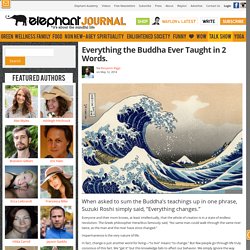 Everyone and their mom knows, at least intellectually, that the whole of creation is in a state of endless revolution. The Greek philosopher Heraclitus famously said, “No same man could walk through the same river twice, as the man and the river have since changed.” The 3 Best Bits of Advice the Buddha Ever Gave - Mrs. Mindfulness. The Buddha was a wellspring of wisdom and clarity. 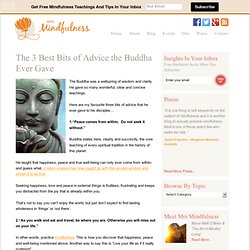 He gave so many wonderful, clear and concise teachings. Here are my favourite three bits of advice that he ever gave to his disciples… 1. “Peace comes from within. Do not seek it without.” Buddha states here, clearly and succinctly, the core teaching of every spiritual tradition in the history of this planet. He taught that happiness, peace and true well-being can only ever come from within- and guess what, modern science has now caught up with this ancient wisdom and shown it to be true. 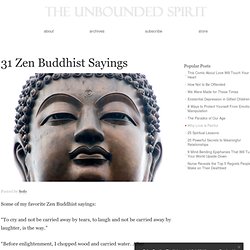