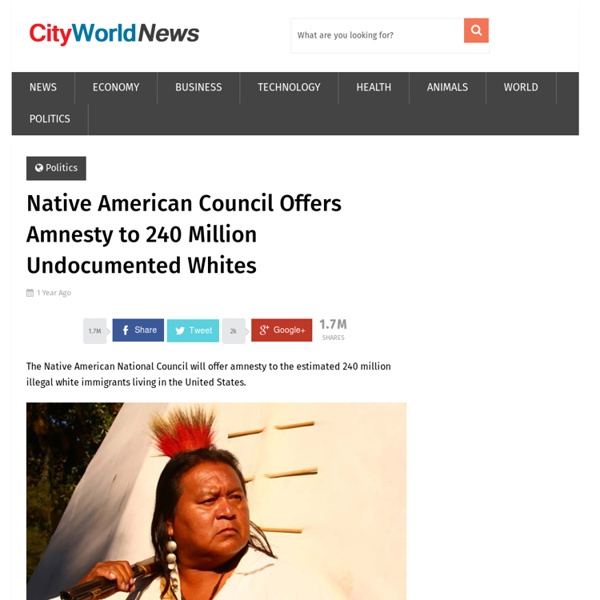 The Native American National Council will offer amnesty to the estimated 240 million illegal white immigrants living in the United States. At a meeting on Friday in Taos, New Mexico, Native American leaders weighed a handful of proposals about the future of the United State’s large, illegal European population. After a long debate, NANC decided to extend a road to citizenship for those without criminal records or contagious diseases. “We will give Europeans the option to apply for Native Citizenship,” explained Chief Sauti of the Nez Perce tribe. “To obtain legal status, each applicant must write a heartfelt apology for their ancestors’ crimes, pay an application fee of $5,000, and, if currently on any ancestral Native land, they must relinquish that land to NANC or pay the market price, which we decide. “Any illegal European who has a criminal record of any sort, minus traffic and parking tickets, will be deported back to their native land.

After Years of Oppression US to Pay Out Nearly $1 Billion to Native Americans Albuquerque, NM — In a historic settlement, Native American tribes have been awarded nearly a billion dollars. The U.S. Department of Justice announced this week that a settlement was reached with 645 Native American Tribes for the sum of $940 million dollars. ESL English Listening & Adult Literacy - News - Audiobooks - Songs - Radio Dramas The Tunnel Under The World by Frederik Pohl Guy Burckhardt wakes up screaming, but can't remember the nightmare that caused his fright. Slowly over the next couple of days he comes to realize he's been reliving the same day over and over. And things only get stranger and more frightening from there. One of the true classics of science fiction.

10 Quotes From a Oglala Lakota Chief That Will Make You Question Everything A... By Wisdom Pills / wisdompills.com Luther Standing Bear was an Oglala Lakota Sioux Chief who, among a few rare others such as Charles Eastman, Black Elk and Gertrude Bonnin occupied the rift between the way of life of the Indigenous people of the Great Plains before, and during, the arrival and subsequent spread of the European pioneers. Raised in the traditions of his people until the age of eleven, he was then educated at the Carlisle Indian Industrial Boarding School of Pennsylvania, where he learned the english language and way of life. (Though a National Historical Landmark, Carlisle remains a place of controversy in Native circles.) Like his above mentioned contemporaries, however, his native roots were deep, leaving him in the unique position of being a conduit between cultures.

An Obituary printed in the London Times.....Absolutely Dead Brilliant!! - THE PANAMA PERSPECTIVE This was sent in to me by one of my readers. Today we mourn the passing of a beloved old friend, Common Sense, who has been with us for many years. No one knows for sure how old he was, since his birth records were long ago lost in bureaucratic red tape. Women Are Sacred: 11 Native American Quotes About Women The cycle of life for the woman is the baby, girl, woman, and grandmother. These are the four directions of life. She has been given by natural laws, the ability to reproduce life. The most sacred of all things is life. 10 Quotes From A Sioux Indian Chief That Will Make You Question Everything Ab... There were very few Native American leaders who were able to occupy the rift that was created between the traditional way of life for the indigenous cultures and the new way of life forced upon them by the arrival of European pioneers and explorers. However, that doesn’t mean it never happened. People like Black Elk, Charles Eastman, and Gertrude Bonnin knew what life was like in the Great Plains before the Europeans arrived and they saw what it was like afterwards as well.

Lord of the Flies Questions Bring on the tough stuff - there’s not just one right answer. Why does Golding end Lord of the Flies with the rescue of the boys? Does this ending change the realistic nature of the novel? Manufacturing the Illusion of Democracy – Chris Hedges “We’ve bought into the idea that education is about training and “success,” defined monetarily, rather than learning to think critically and to challenge. We should not forget that the true purpose of education is to make minds, not careers. The words consent of the governed have become an empty phrase.

What's written in the scars of Hillary Clinton Admit it. Even if you support Hillary Clinton, some part of you secretly wishes some other woman *cough, Michelle Obama or Elizabeth Warren,* could be the first female president. You’re worried, because Clinton’s favourability numbers (38%) are in the cellar, and pollsters everywhere are saying she’s the least popular Democratic presidential candidate since anyone started counting.