Speaking: Murder in the classroom 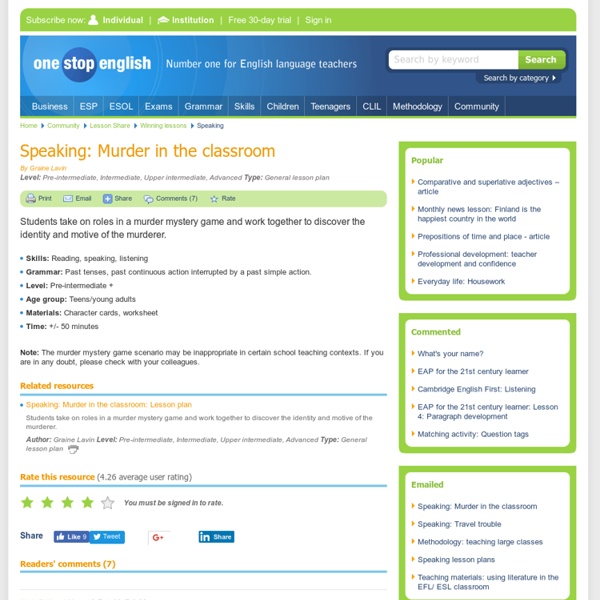 Classroom Murder Mystery Game: Mystery at Mr. Grim's Mansion (ESL/EFL) ESL Mystery Game: Mystery at Mr. Grim’s Mansion Strengths: Entertaining, speaking practice ESL Level: Intermediate to Advanced Class Time: 1-2 hours Foreword: Planning a murder mystery for your ESL class takes time. I have done two murder mystery activities with my advanced Junior High ESL class. I found it on OneStopEnglish, which requires a membership (you may be able to find it elsewhere). The mystery I designed is more complicated and requires more preparation. Mystery Basic Idea: The twist in this story is that it is not a murder mystery; rather, it is just a mystery. The first part of the activity has them question each other in order to get background character information, possible weapons, and motives. The story contains elements of the game Clue (or Cluedo). Mystery Execution: 1) Assign Character Roles Distribute character cards + props (wigs, hats, etc) in the hall. The necessary characters are: Wally (the cobra-bringer), Dr. 2) Introduce the setting: It is now Saturday at 9 pm.

Topics for Debate in English This page lists suggested subjects that can be discussed to practise agreeing and disagreeing in English. Here are 20 topics to discuss with a friend or group. Practise agreeing and disagreeing even if you have to argue against something you actually believe in. One way to have fun with this is to make up a bunch of cards that say agree or disagree. Each person has to pick up a card and then the topic is read out. It is more fun to have a debate this way because you don't have to play your true self. Describing photos (comparing, contrasting and speculating) You are going to practise language for; Describing photosComparing and contrasting photos (discussing similarities and differences)Speculating on what might be happeningReacting to photos (giving opinions) Discuss Look at the presentation. Follow the instructions and talk about some of the photos Write The language used here for comparing and contrasting / speculating is also useful for writing discussion / argument essays. Plan: Introduction - describe the situation / topic to be discussedCompare / contrast ideas (for and against / advantages and disadvantages)Speculate on solutions to problems raised by the questionConclusion - give an opinion Which pairs or groups of photos in the presentation could be used to demonstrate ideas for argument writing topics about education, technology, food, family, work, leisure, health, advertising etc? More Practice on May / Might / Could / Must / Can't

Mr. Preble Gets Rid of His Wife “Let’s run away together,” said Mr. Preble. “All righty,” said his stenographer. Mr. Preble jingled the keys in his pocket and looked out the window. “My wife would be glad to get rid of me,” he said. “Would she give you a divorce?” “I don’t suppose so,” he said. “You’d have to get rid of your wife,” she said. Let’s go down in the cellar,” Mr. “What for?” “Oh, I don’t know,” he said. “We never did go down in the cellar that I remember,” said Mrs. “Supposing I said it meant a whole lot to me,” began Mr. “What’s come over you?” “We could pick up pieces of coal,” said Mr. “I don’t want to,” said his wife. “Listen,” said Mr. “There isn’t a good enough light down there,” she said, “and anyway, I’m not going to go down in the cellar. “Gee whiz!” “I don’t want to go!” “All right, all right,” he said. “Will you quit harping on that subject?” “We’ve been all over that,” said Mrs. “I just wanted you to know how things are,” said Mr. “I never believed that for a minute,” said Mrs. “Is that so?

Giving Opinions Four Corners ESL/EFL Speaking Activity - Pre-intermediate - 25 Minutes In this fun class activity, students practice expressing and defending their opinions. The teacher places a different sign (Strongly Agree, Agree, Disagree, and Strongly Disagree) in each corner of the classroom. Then, the teacher reads a statement that requires the students to give an opinion, e.g. Four Corners.PDF Our Opinions ESL/EFL Writing and Speaking Activity - Pre-intermediate - 40 Minutes In this productive teaching activity, students practice expressing and giving reasons for opinions, and writing simple sentences summarizing the results of a questionnaire. Our Opinions.PDF How to improve your English ESL/EFL Speaking Activity - Pre-intermediate - 30 Minutes This engaging teaching activity helps to teach students how to express opinions and ask others for their opinion. How to improve your English.PDF I Think That ... Here is a useful teaching activity to help your students practice making opinions. Explain Yourself

Constance Kent Jonathan Whicher was one of the original members of the Detective Branch which had been established at Scotland Yard in 1842. In 1860 he was called in to assist the investigation into the horrific murder of 4-year-old (Francis) Savile Kent. The child had been taken from the nursemaid's bedroom at night and was found, with his throat cut, in an outside privy in the garden of his family's house the next morning. The murder brought notoriety to the small village of Road (sometimes spelled Rode) in Wiltshire. When the nursemaid, Elizabeth Gough, reported the child missing at 7:15am to Mrs Kent, a search commenced for the child, who was found dead in an outside privy with his throat cut and a stab wound to the chest. The local magistrates soon became impatient for results from the local police Superintendent Foley's investigation, which was largely directed towards the nursemaid Elizabeth Gough who had had responsibility for the child.