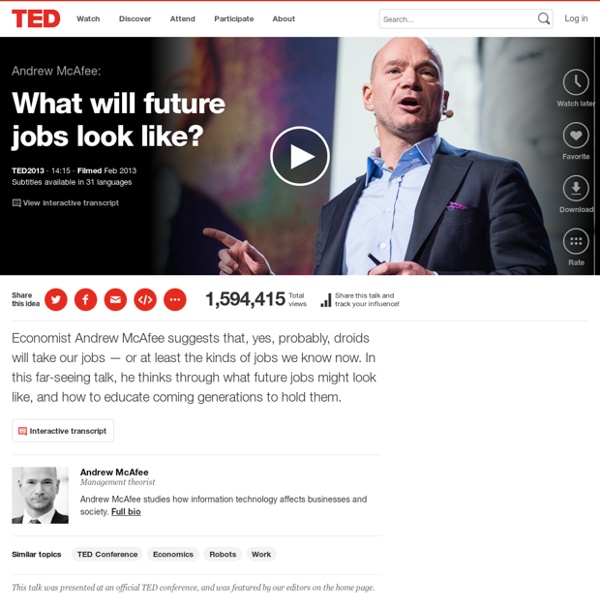 Future of Work: What Skills Will Help Us Keep Pace? From Elon Musk’s tweet that artificial intelligence may be more dangerous than nuclear weapons to the growing clamor of voices warning robots will take away our jobs, it is clear we are focusing more on the problems of AI, robotics, and automation than the solutions. While the problems are real and should be taken into account, social innovators around the world are already working to deliver solutions. It’s true that today’s technology is reworking the economy and our role in it. But this needn’t herald economic end times. To smooth the transition, we need to ensure that displaced workers have the resources to learn new work and children are given a good head start. This is nothing new.

The death of the exam: Canada is at the leading edge of killing the dreaded annual ‘final’ for good Exam season — that annual academic ritual of last-ditch, high-stress cramming — is upon the students of Canada. But as two major universities, York and Toronto, head into finals after prolonged teacher strikes, some students are fretting about a different sort of stress: The possible cancellation of this year’s big tests. That would mean no risk of choking on exam day, but also no chance to bump up final grades.

Have we reached 'peak food'? Shortages loom as global production rates slow The world has entered an era of “peak food” production with an array of staples from corn and rice to wheat and chicken slowing in growth – with potentially disastrous consequences for feeding the planet. New research finds that the supply of 21 staples, such as eggs, meat, vegetables and soybeans is already beginning to run out of momentum, while the global population continues to soar. Peak chicken was in 2006, while milk and wheat both peaked in 2004 and rice peaked way back in 1988, according to new research from Yale University, Michigan State University and the Helmholtz Centre for Environmental Research in Germany. What makes the report particularly alarming is that so many crucial sources of food have peaked in a relatively short period of history, the researchers said. “People often talk of substitution. If we run out of one substance we just substitute another.

10 well paid jobs of the future Mr Bellini posited the idea of an elderly well-being consultant, who specialises in personalised care for older patients, or a memory augmentation surgeon who helps counter memory loss. He also saw big changes in farming as food resources became scarce, with genetically modified crops becoming common and crops grown vertically in areas resembling multi-storey car parks to save space. Ian Pearson, a futurologist who wrote You Tomorrow, sees job growth in the field of augmented reality, where the real world is overlaid with computer-generated images. “When you look at a building it’s constrained by planning laws, but in cyberspace you can make it look however you want,” he said. “A company with a high street presence could make their shop look like Downton Abbey, or set it in a post-nuclear apocalypse environment.” Mr Pearson also argued that the better technology gets, the more people will have to focus on their “human skills” to survive in the workforce.

The Future of Work: Quantified Employees, Pop-Up Workplaces, And More Telepresence For many people, especially those working at desk jobs, the workplace is very different than it was 20 years ago: there’s a computer at every desk, telecommuting is fairly common, and the traditional cubicle is giving way to more collaborative spaces. We’ve seen predictions about where we’ll go from here before; now PSFK, a popular blog that also happens to be a thriving consultancy, has come up with its own version of the future of work, described in a new 138-page report. It’s not as fantastical as many future-forward reports--it’s planted firmly in ideas that are already gaining a lot of traction. Perhaps that makes it more accurate. We’ll find out. Here are our takeaways. Stories of Afghan girls whose lives have been turned around by education revealed In the western world, we take education for granted and often disgruntled children bemoan the fact they they have to attend class and complete homework. But in may other parts of the world girls have to fight for the right to go to school. A new series of portraits of female pupils at two schools in Afghanistan has highlighted the battle that young girls face to be given the right to learn basic skills like reading, writing and arithmetic, and the power that has to transform their lives. Scroll down for video A series of portraits of Afghan school girls show the growing desire in the country for young women to be educated (Left: Zeinab, 12, Centre: Nadira, 10, and right: Gulmakai, 14) Photographer Simon Urwin interviewed young girls and their mothers at a school in Kabul, which teaches equality, tolerance, and human rights, including women's issues, alongside traditional academic subjects like maths and science.

10 Job Skills You’ll Need in 2020 The world of work—and the world in general—is changing. People are living longer, new technologies are emerging, and we’ve never been more globally connected. That means the skills we use now in the workplace are not necessarily the skills we’ll need in the future. To get a sense of what skills you might want to start investing your time into developing, check out the infographic below. (Note: It might sound like 2020 is really far into the future, but it’s actually only about five years away.) The 10 Most Important Work Skills in 2020 Share this infographic on your site! <a href=" src=" alt="Important Work Skills for 2020" width="500" border="0" /></a><br />Source: <a href=" The 10 Most Important Work Skills in 2020 Future Work Skills of 2020: Sources:

Finland: A Society of Trust. Imagine a world where you simply expect everyone to follow the rules and do the right thing. This is a world where mothers leave sleeping infants in their strollers outside of little shops while they run in for a quick purchase. This is a society where all school doors are left unlocked and public transportation basically operates on an honor system. It is simply assumed that you have already paid to ride the bus or tram. Here you can see children as young as 7 or 8 years old calmly riding the public bus/tram to get themselves to and from school or walking/ skipping down the street alone.

Garbage designer, robot counsellor among the predicted jobs of 2030 About 15 years from now, farmers will have made their way from the countryside to the city, counsellors will help ensure the right robot goes to the right family and garbage designers will lead the upcycling movement. Those are some predictions made by the Canadian Scholarship Trust Plan’s Inspired Minds initiative, which aims to give Canadians a sneak peek of the job market in 2030. Some of the more curious careers include: Nostalgist: A mix between a therapist, an interior designer and a historical researcher, a nostalgist will help the wealthy elderly of 2030 create a living space inspired by their favourite decade. Rewilder: The old name for this job was "farmer."