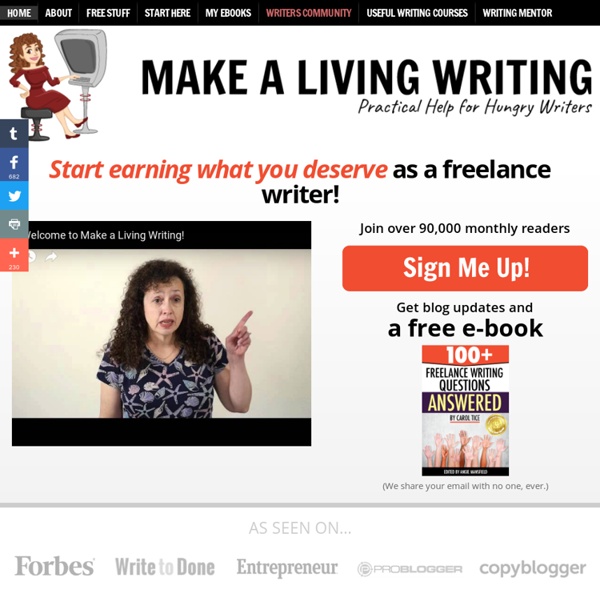 It’s always great to be busy as a freelance writer. But one problem that often crops up is that it’s easy to let marketing slide. Then, next thing you know, those current projects wrap. And you find yourself facing the terror of an empty schedule and the plummeting income that goes along with it. One writer recently asked me what to do about this problem: “I have some regular clients, but projects are coming to an end.

Explore the Genre Map Publishers, booksellers, and readers describe books by their literary categories, or genres. It's how books are placed in stores and sold online. We created the Genre Map to help you find the right genre for your book. Pixar’s 22 Golden Rules of Storytelling Back in 2011, then Pixar storyboard artist Emma Coats (now freelancing) tweeted 22 rules of storytelling, according to Pixar. Coats learned the ‘guidelines’ from senior colleagues on how to create appealing stories, tweeting the nuggets of wisdom over a 6 week period. Last week, artist and User Experience Director at Visceral Games (a subsidiary of Electronic Arts), Dino Ignacio, created a series of image macros of the 22 rules and posted them to Imgur and Reddit. Below you will find the list of image macros along with a text summary of Pixar’s 22 rules of storytelling at the end of the post. Enjoy! [Sources: Emma Coats, Dino Ignacio, The Pixar Touch]

Can the Query/LOI Hybrid Help You Break Into More Magazines? Should you try to break into that magazine with a quick Letter of Introduction (LOI) or a fully fleshed-out query? Sometimes, it’s best to do both. If you don’t have a lot of clips and/or experience in the topic of the magazine you want to write for, an LOI can fall flat. You’re basically saying, “Hey, here I am…I don’t have much to offer you, but I’m hoping you’ll hand me a freelance assignment just the same.” Paris Review Daily - Blog, Writers, Poets, Artists - Paris Review Donald Barthelme would’ve been, and should be, eighty-three today. It would be an exaggeration to say that I feel the absence of someone whom I never met—someone who died when I was three—but I do wonder, with something more than mere curiosity, what Barthelme would have made of the past twenty-odd years. These are decades I feel we’ve processed less acutely because he wasn’t there to fictionalize them: their surreal political flareups, their new technologies, their various zeitgeists and intellectual fads and dumb advertisements. Part of what I love about Barthelme’s stories is the way they traffic in cultural commentary without losing their intimacy, their humanity.

What Are My Writing Tips? It pays to read through your spam filter, sometimes. You will be amazed by what you may find. Along with the usual spams, you could either find a legit comment or a piece of inspiration. I have found such comments. The other day, I found a curious message, in my spam filter. An apparent new blogger asked a question. The Anti 9-to-5 Guide » Do you need a freelance portfolio site? August 21st, 2012 I sat on a panel tonight at a personal branding event at the University of Washington. One of my suggestions was that creative freelancers — writers, designers, illustrators, photographers and the like — set up an online portfolio as soon as possible. You even don’t need your own website to create an online portfolio. A number of free or nominally priced prefabbed portfolio sites make creating your own digital portfolio a cinch. Here are a few I’ve found.

Searching for New Writing Markets? Try These Tips and Journals (kathysteinemann.com) Are you a writer or a poet? Have you considered publishing in literary journals? Here are tips for finding markets, and a section with links to four paying journals. The Basics Ralph Grizzle, award-winning journalist, editor Avid Cruiser One of the best known names in cruise writing, Ralph has been covering the industry for well over a decade and has sailed on more than 100 vessels. — Gene Sloan, USA Today I began my journalistic career at the age of 32, following the conclusion of my ‘sabbatical decade.’ From 1980 through 1990, I bicycled across America, pedaled through Europe and island-hopped the South Pacific.

The Psychology of Writing and the Cognitive Science of the Perfect Daily Routine Reflecting on the ritualization of creativity, Bukowski famously scoffed that “air and light and time and space have nothing to do with.” Samuel Johnson similarly contended that “a man may write at any time, if he will set himself doggedly to it.” And yet some of history’s most successful and prolific writers were women and men of religious daily routines and odd creative rituals. (Even Buk himself ended up sticking to a peculiar daily routine.) Seven Tips From Ernest Hemingway on How to Write Fiction Image by Lloyd Arnold via Wikimedia Commons Before he was a big game hunter, before he was a deep-sea fisherman, Ernest Hemingway was a craftsman who would rise very early in the morning and write. His best stories are masterpieces of the modern era, and his prose style is one of the most influential of the 20th century.