Joan Didion on Keeping a Notebook 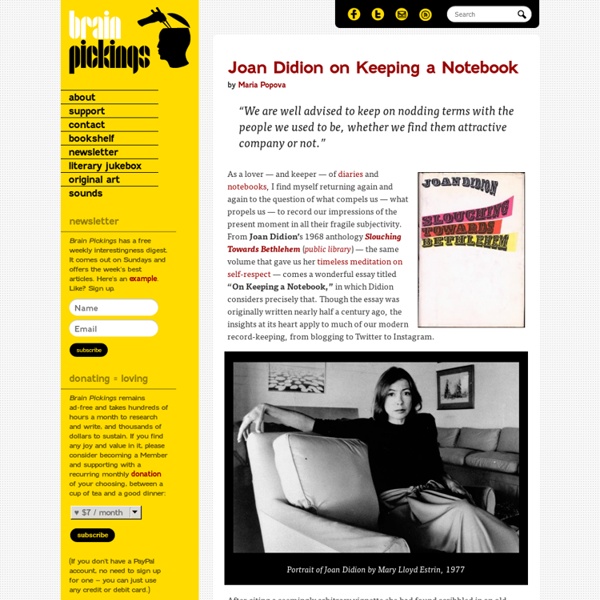 by Maria Popova “We are well advised to keep on nodding terms with the people we used to be, whether we find them attractive company or not.” As a lover — and keeper — of diaries and notebooks, I find myself returning again and again to the question of what compels us — what propels us — to record our impressions of the present moment in all their fragile subjectivity. From Joan Didion’s 1968 anthology Slouching Towards Bethlehem (public library) — the same volume that gave us her timeless meditation on self-respect — comes a wonderful essay titled “On Keeping a Notebook,” in which Didion considers precisely that. Though the essay was originally written nearly half a century ago, the insights at its heart apply to much of our modern record-keeping, from blogging to Twitter to Instagram. Portrait of Joan Didion by Mary Lloyd Estrin, 1977 After citing a seemingly arbitrary vignette she had found scribbled in an old notebook, Didion asks: Why did I write it down? What, then, does matter? Related:  Literature • mystique

Frank Kermode · Writing about Shakespeare has his say · LRB 9 December 1999 Fifty-odd years ago I was asked to review a book about Shakespeare by an aged professor who claimed that a career spent largely in teaching Shakespeare gave him a right to have his final say on the subject. This notion I thought grossly self-indulgent. There seemed to be little reason to believe that at his age he could suddenly have found anything interesting to say. And there surely were enough books on Shakespeare already, many of them dull, many of them silly, without the addition of another of which the primary motive was vanity and an understandable fear of oblivion. For I myself have been teaching and writing about Shakespeare, off and on, for fifty-odd years, and am even older than the author of the book I was then reviewing. I put it off for years but in the end I did it. I’ll begin by trying to answer that question. Why does this concern me? I have nothing against homoerotic amity and of course I deplore gender polarisation. His sons rally to him, and they counter-attack:

6 Things {Sexy Consciously Awake} Women Want From Sex About Me I am a lover of words and all things true. I am an awake women who will not be held down. I am here to do great things for what other reason is there to live and breathe. “If you want to be the kind of lover women never forget, then it’s time to seriously educate yourself on the art of sex. Contrary to popular belief, women are not less sexual than men, we’re just wired differently. While men can get an erection and go from zero to hero in less than five minutes, most women need a whole heck of a lot more than that to feel sexually satisfied. Let’s get one thing straight: women love sex. Men, do you want to see your woman’s body convulsing in orgasms? Then listen up! “Consciously awake women want more than physical sex. You are more than your physical body, which is but one level of your existence. Physical sex will only take you so far. When two people connect energetically – not just physically – MAGIC happens. “Consciously awake sex transcends basic sex on ALL LEVELS. MEN!!

Famous Writers’ Sleep Habits vs. Literary Productivity, Visualized by Maria Popova The early bird gets the Pulitzer … sort of. “In both writing and sleeping,” Stephen King observed in his excellent meditation on the art of “creative sleep” and wakeful dreaming, “we learn to be physically still at the same time we are encouraging our minds to unlock from the humdrum rational thinking of our daytime lives.” Over the years, in my endless fascination with daily routines, I found myself especially intrigued by successful writers’ sleep habits — after all, it’s been argued that “sleep is the best (and easiest) creative aphrodisiac” and science tells us that it impacts everything from our moods to our brain development to our every waking moment. I found myself wondering whether there might be a correlation between sleep habits and literary productivity. First, I handed them my notes on writers’ wake-up times, amassed over years of reading biographies, interviews, journals, and other materials. Donating = Loving Brain Pickings has a free weekly newsletter.

How Coffee Influenced The Course Of History : The Salt hide captionAn overseer sits in the shade while workers collect coffee beans on a Brazilian plantation, circa 1750. Hulton Archive/Getty Images Coffee is a powerful beverage. On a personal level, it helps keep us awake and active. Coffee plants grow wild in Ethiopia and were probably used by nomadic tribes for thousands of years, but it wasn't until the 1400s that people figured out they could roast its seeds. By the 1500s, he says, the drink had spread to coffeehouses across the Arab world. "It actually had a major impact on the rise of business," Pendergrast says. The insurer Lloyd's of London was founded hundreds of years ago in one of London's 2,000 coffeehouses, he notes. It is often said that after the Boston Tea Party of 1773, when American colonists raided British tea ships and threw crates of tea into the harbor, Americans universally switched over to drinking coffee. "There's a lot of truth to the story, I found," Pendergrast says.

Digital and Paper Diaries Are Written for an Imagined Audience - Room for Debate “I have tried to keep diaries before but they didn’t work out because of the necessity to be honest.” John Steinbeck made this entry in a ledger he used to track his progress on "The Grapes of Wrath." If we pine for a golden age of diary keeping, let’s indeed be honest: the pens and notebooks of the past inspired a truth no more — and no less — pure than the digital tools of today. While we romanticize diaries as unmediated transcriptions of thought and feeling, they have really always been a forum for self-creation. E. Even before this era of self-revelation, journal keepers imagined an audience — a child, a lover, a snooper, one’s older self or even God. I’ve dedicated my professional life to the preservation of personal records in manuscript form. Today’s tools, if anything, expand our options for self-expression, making it easier for all of us — the Marion Rehrers as well as the Richard Burtons and Brad Pitts of the world — to add our voices to history. E.

How to Get Out of Your Own Way and Unblock the “Spiritual Electricity” of Creative Flow by Maria Popova “No matter what your age or your life path … it is not too late or too egotistical or too selfish or too silly to work on your creativity.” “Art is not a thing — it is a way,” Elbert Hubbard wrote in 1908. But the question of what that way is, where exactly it leads, and how to best follow it is something artists have been grappling with since the dawn of recorded time and psychologists have spent decades trying to decode, outlining the stages of creativity, its essential conditions, and the best technique for producing ideas. In 1978, a few months after she stopped drinking, artist, poet, playwright, novelist, filmmaker, composer, and journalist Julia Cameron began teaching artists — by the broadest possible definition — how to overcome creative block and get back on their feet after a “creative injury.” Art by Sydney Pink from 'Overcoming Creative Block.' Writing in the introduction to the 10th anniversary edition, Cameron adds to the most beautiful definitions of art:

Up for review: Discernment of Spirits, Soviet New Age, and Magic | Heterodoxology I’ve received three books for review over the last few weeks, making for a hectic book review phase (I’m not gonna mention the ones I’m already late with). They are three fascinating collections, dealing with very diverse material. Here’s a quick preview. Angels of Light? (2012) Clare Copeland and Jan Machielsen’s Angels of Light? “And no marvel; for Satan himself is transformed into an angel of light.” (2 Corinthians 11:14) Paul’s warning of false apostles and false righteousness struck a special chord in the period of the European Reformations. I’ve written on aspects of the problem of discernment on a couple of occasions before (notably in this article; accidentally with a very similar title to the present volume). The New Age of Russia (2012) The next book I’m reviewing concerns a completely different period and location. Occult and esoteric ideas became deeply embedded in Russian culture long before the Bolshevik Revolution. Defining Magic: A Reader (2013) References: Like this: