The Real Reason Wheat is Toxic (it's not the gluten) 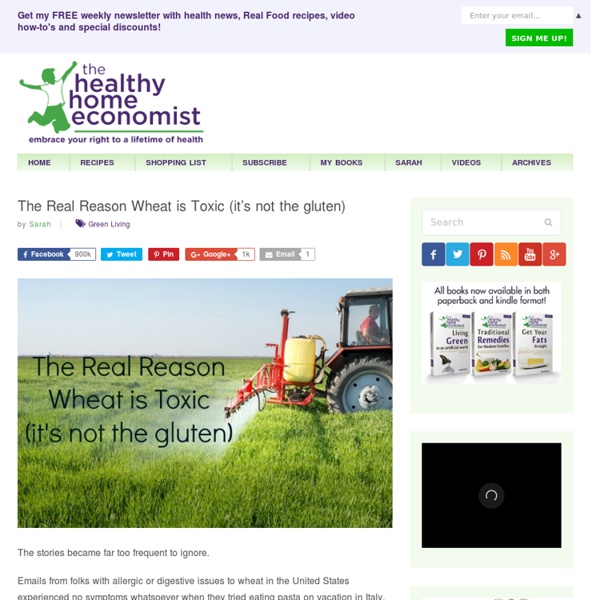 The stories became far too frequent to ignore. Emails from folks with allergic or digestive issues to wheat in the United States experienced no symptoms whatsoever when they tried eating pasta on vacation in Italy. Confused parents wondering why wheat consumption sometimes triggered autoimmune reactions in their children but not at other times. In my own home, I’ve long pondered why my husband can eat the wheat I prepare at home, but he experiences negative digestive effects eating even a single roll in a restaurant. There is clearly something going on with wheat that is not well known by the general public. It goes far and beyond organic versus nonorganic, gluten or hybridization because even conventional wheat triggers no symptoms for some who eat wheat in other parts of the world. What indeed is going on with wheat? For quite some time, I secretly harbored the notion that wheat in the United States must, in fact, be genetically modified. You’re going to want to sit down for this one. Dr.

Cat poop parasite may trigger rage disorder in people WEDNESDAY, March 23, 2016 -- Your cat's litter box could be a source of explosive anger -- and not for the obvious reasons. A new study suggests that people prone to explosive bouts of rage might be under the influence of toxoplasmosis, an illness caused by a parasite found in cat feces and undercooked meat. Folks diagnosed with intermittent explosive disorder (IED) are more than twice as likely to carry Toxoplasma gondii, the parasite that causes toxoplasmosis, said lead researcher Dr. Emil Coccaro. Genetic Mutations Don’t Cause Cancer — Here’s What Does 2nd April 2016 By Carolanne Wright Contributing Writer for Wake Up World Chances are, you know at least one person who has been touched by cancer. It’s a terrifying and life-altering diagnosis. Even more so if facing conventional cancer treatments like chemotherapy and radiation, which carry their own heavy side-effects without any guarantee they will help the situation.

Are Oxalates at the Root Cause of Your Thyroid Condition? Preliminary research has tied oxalate build-up to thyroid disease, and while I’ve never had a problem with oxalates (knock on wood), other thyroid patients have reported oxalate issues. While oxalate build-up has been predominantly tied to kidney stone formation, a study of thyroid autopsies found that 79% of adults were found to have oxalate crystals in their thyroid glands, with prevalence increasing with age. Interestingly, people with Hashimoto’s had a lower incidence of oxalate crystals, especially in the parts of their thyroid gland that were inflamed!

Influenza Attacks: Video Shows How A Virus Infiltrates Our Body Avoiding influenza is everyone’s top priority come flu season. Today we have the flu vaccination as the preferred (by most people) method for prevention, but you may be interested to know how a person sneezing near you can result in a fever, runny nose, cough, and sore throat. An animated video uploaded by NPR shows exactly how a virus invades our body and exposes our cells to the flu. Surprisingly, it’s much like opening a locked door with the right key. “When you get the flu, viruses turn your cells into tiny factories that help spread the disease,” the video description reads.

The Exhaustion Cycle and How to Break Free from It Exhaustion is one of those words that gets overused and devalued. It’s like calling something that is funny “hilarious”. Exhaustion, by definition, means completely spent. If you’ve ever experienced true exhaustion you know exactly what I mean. Gut, Brain, and Autoimmune Disorders The Role of Food I had the experience of a lifetime attending “Gut, Brain and Autoimmune Disorders: The Role of Food“, a conference sponsored by the American Academy of Anti-Aging Medicine in Los Angeles. I felt very lucky to be among the group of 150 or so attendees that consisted of health care professionals from a wide variety of disciplines, including nutritionists, medical doctors, naturopathic doctors, chiropractors, nurse practitioners and pharmacists. I had a chance to meet many of the attendees, and most of them were drawn to functional medicine as a result of having personal or family health crises. They turned to functional medicine to find answers they couldn’t get from traditional medicine. During the two days of the conference, I heard amazing stories of people recovering from Alzheimer’s disease, rheumatoid arthritis, ADHD, heart disease, multiple sclerosis, autism, movement disorders, chronic fatigue, and other conditions.

Is Stress Causing You To Have Bad Breath? - Bad Breath Report - Oxyfresh Stress is a killer. Thats the cold, hard truth. Many of the illnesses today have been caused or aggravated by stress. It affects the many facets of a person including the mental and physical health. Apparently, bad breath is not an exemption because many believe that stress can result to foul-smelling breath. Halitosis is a condition that is both embarrassing and isolating. Even Science Agrees, You Literally Can't Spoil A Baby “Don’t you ever put that baby down?” “Aren’t you going to spoil him?” “Start teaching him to self-soothe now, before it’s too late.” Yup, these were things actually said to me when my babies were newborns. Nope, not even when they were a few months old.

9 Signs Of Hashimoto’s Disease (And How To Treat It) A quick note from our founder- Over the past year, my friend Dave at PaleoHacks has been working on a secret cookbook with world-renowned Le Cordon Bleu chef Peter Servold. Well, today this new this new incredible Paleo Cookbook is finally available to be shipped right to your door for FREE That's right -- as a special launch promotion, we're offering our brand new Paleo fat loss cookbook to you for free (Chef Pete lost 60 lbs using these recipes!) -- All you have to do is just cover a small shipping cost (international shipping is a bit more).