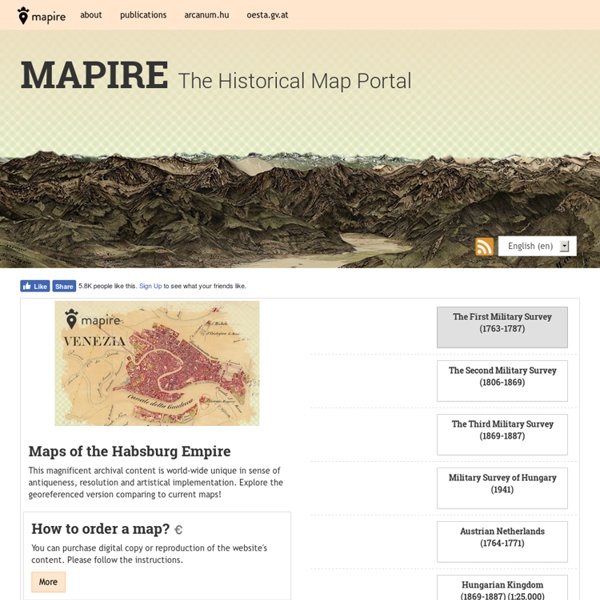 20 maps that never happened Maps are a powerful way of illustrating not only the world that is, but worlds that never have been. What follow are not fictional maps — there's no Westeros or Middle Earth — but plans and hypotheticals that never came to pass. You'll see military plans for invasions that didn't happen or conquests that were hoped-for and never achieved. You'll also find daring infrastructure schemes that would have remapped cities and even whole continents. There are proposals for political reform — some serious and some more fanciful — as well as deeply serious plans for entire independent nation-states that have never been brought to life. Welcome to maps of worlds that don't exist — but might.

Collections - Old Maps Online: Project Below are brief descriptions of the online digital map collections searchable and accessible through the OldMapsOnline portal. Nearly all the institutions providing online map collections have a much larger paper map collection available at their respective institutions, but the OldMapsOnline portal will only search and provide direct linkage to the online maps. During the JISC funded project we added collections from around the world. Inside The Most Amazing Map Library That You've Never Heard Of The American Geographical Society Library at the University of Wisconsin, Milwaukee. (Photo: Luke Spencer.) Within the campus of University of Wisconsin-Milwaukee is a geographer’s treasure trove: over a million artifacts from the American Geographical Society, one of the most incredible collections of maps, atlases and globes to be found in America. But, ironically, the library is practically unexplored territory. When I asked for directions on campus many students themselves didn’t know it was there.

USGS Historical Topographic Maps Accessing historical topographic maps has never been easier TopoView highlights one of the USGS's most important and useful products, the topographic map. In 1879, the USGS began to map the Nation's topography. This mapping was done at different levels of detail, in order to support various land use and other purposes. As the years passed, the USGS produced new map versions of each area. Anglo-Saxon London Map The full map in overview. A high-resolution version can be found by clicking below. Central London was once largely marshland. The first major Anglo Saxon settlement was Lundenwic (now Covent Garden/Aldwych).

An Illustrated Guide to Space Maps Nebra Sky Disc, Germany, 1600 BC. (Photo: Rainer Zenz/WikiCommons CC BY-SA 3.0) With its patinated bronze background and shiny gold sun, moon and stars, the 3600-year-old Nebra Sky Disc is worth gazing at for its beauty alone. But the ancient object is cool for a lot of other reasons: It’s the earliest depiction of outer space we’ve ever found, and it’s also thought to be the oldest known portable astronomical instrument. For as long as humans have stared at the sky, we have sought to understand our place in the cosmos. This lovely orb is one of a long line of attempts of humans to map the unmappable—space. Old maps of Seven Seas (Open Ocean) How does it work? These instructions will show you how to find historical maps online. Getting started Type the place name in the search box to find the exact location.

Appalachian Mountain Club's Equipped: Nearly Every USGS Topo Map Ever Made. For Free. The U.S. Geological Survey (USGS) has been producing detailed topographic maps for more than 125 years. Today they are nearly all digitized and free to download through the USGS Map Store, an incredible treasure trove for both map junkies and casual hikers alike. Locating your desired map is straightforward with the USGS Map Locator and Downloader, which allows you to zoom in or search for your area of interest. It then gets mildly confusing (though easy once you figure it out) to download the actual map. To do so, find your desired location and select the type of map you wish to download (usually the 7.5-minute versions, which provide the most detail).

Victorian London in Incredible Detail Here’s a real treat. The National Library of Scotland’s Map Department, supported by David Rumsey, have taken some very high-resolution scans of the Ordnance Survey 1:1056 (that’s 60 inches to the mile!) set of 500+ maps of London issued between 1893 and 1896 and, crucially, reorientated and stitched them together, so that they can be presented seamlessly (using OpenLayers) on top of a “standard” Google web map or OpenStreetMap, with the base map acting as a modern context. The detail in these maps is breathtaking. In the above extract (direct link) of the eastern end of Fleet Street, you can see each individual alleyway.

A sneak preview of 3D Imaging at the Osher Map Library and Smith Center for Cartographic Education Moving forward into the future of digitizing our cultural heritage, OML’s Digital Imaging Center is engaged in an innovative project to three-dimensionally image the library’s rare globe collection, the second-largest of its kind in a U.S. public institution. Generous grants from the National Endowment for the Humanities and the Friends of the Osher Map Library support the conservation, and subsequent 3D imaging, of the collection's most threatened or valuable items. Digitization will make it possible for students and members of the public to manipulate and examine the rare globes online, preventing potential handling damage to these delicate objects. A digital undertaking such as this is no small task, considering that full-rounded 3D imaging by cultural institutions is still at its infant stage. E-Commerce meets Cultural Heritage The commercial company, Ortery, provided the equipment and software used to three-dimensionally image the globes.

Cheats guide to making simple outline maps in Photoshop - Red Dice Diaries Please note: There are some excellent and very professional cartographers out there producing great maps for games, this article is not designed to create a map to compete with them, it is for someone who wants to quickly put together a simple map that they can use during a RP campaign with minimal struggle. Producing professional looking campaign maps can be very tricky, takes a lot of practice and time, however, if you’re just looking for a quick map that will enable you to get playing your game quickly then this guide should help you. This article assumes you have access to Photoshop and basic ability to use it (although the principles should be transferable to other graphic programs like GIMP). Open a new screen Start up your graphics program and open a new image. Colour in the water on your map Choose a colour to represent the water on you map and then fill the whole screen in that colour (you can switch to the fill option by pressing G on your keyboard in Photoshop).