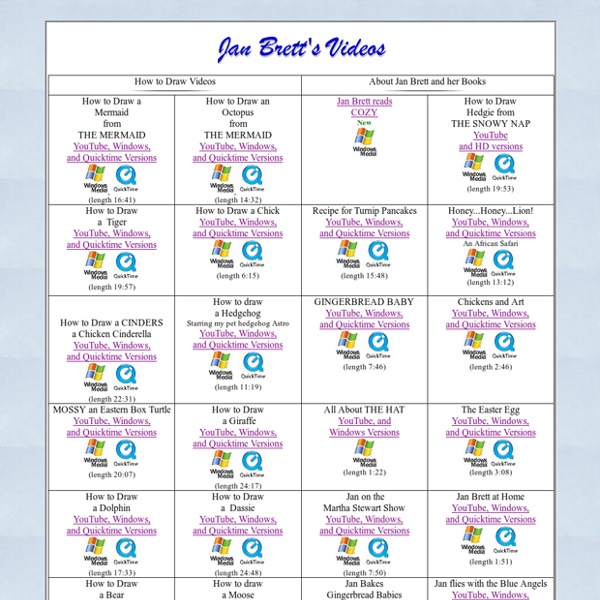 How To Draw Mo Willems - Lunch Doodles 100 Excellent Art Therapy Exercises for Your Mind, Body, and Soul January 9th, 2011 Pablo Picasso once said, "Art washes away from the soul the dust of everyday life." It's no surprise, then, that many people around the world use art as a means to deal with stress, trauma and unhappiness – or to just find greater peace and meaning in their lives. Emotions Deal with emotions like anger and sadness through these helpful exercises. Draw or paint your emotions. Relaxation Art therapy can be a great way to relax. Paint to music. Happiness Art can not only help you deal with the bad stuff, but also help you appreciate and focus on the good. Draw your vision of a perfect day. Portraits Often, a great way to get to know yourself and your relationships with others is through portraits. Create a future self-portrait. Trauma and Unhappiness These activities will ask you to face some unpleasant aspects of life, but with the goal of overcoming them. Draw a place where you feel safe. Collaging Create a motivational collage. Self Draw images of your good traits. Gratitude

A video interview with Henry Winkler Lin Oliver Biography of Henry Winkler Henry Winkler is an actor, producer, and director best known for his portrayal of Fonzie on the hit 1970s sitcom Happy Days. He later appeared in movies like Scream (1996) and on numerous TV programs, including The Practice and Arrested Development. Henry Franklin Winkler was born on October 30, 1945, in Manhattan, New York. Winkler grew up with "a high level of low self-esteem." In addition to his movie and film credits, Winkler is a best-selling author of children's books. Winkler has been married since 1978 to Stacey Winkler and is a father to three grown children. Winkler hosted the Reading Rockets PBS show, Reading and the Brain, which explores how brain scientists across the country are working to help struggling readers. A child with a learning challenge is embarrassed by their inability to keep up. If there was one word that I would pass on to all children, it would be tenacity. Being smart does not necessarily correspond to school work.

A video interview with Norman Bridwell Biography When Norman Bridwell first visited children's publishing houses in 1962, one drawing in his portfolio was of a little girl and a big red dog. Little did Bridwell know, this idea would evolve into a global phenomenon, helping him to sell over 44 million books. Bridwell claims that "luck has a lot to do with it," but without his adorable illustrations, playful humor, and childlike imagination, Clifford would not have become one of the world's most beloved dogs. Children love to see what Clifford the Big Red Dog will do next, whether it's putting out a fire, joining the circus, or just doing tricks. Growing up in Kokomo, Indiana, Norman Bridwell was always drawing. After high school, Bridwell wanted to turn his love of drawing into a career. Bridwell visited about fifteen publishing houses, but there were no assignments to be had, and even worse, seemingly little hope for any in the future. All-Around Dog Now all he needed were names for his characters. "He's Red and He's Warm"

A video interview with Andrea Beaty Beaty was raised in a small town in southern Illinois. She was one of six kids and spent her summer days outdoors, looking for adventures in the fields and forests near her home. She was a big reader as a kid and especially loved the Nancy Drew and Trixie Beldon mysteries. She later moved on to Agatha Christie books and then the classics. As a kid, she spent her days being a detective, world explorer, movie star, and spy. Beaty attended Southern Illinois University, studying biology and computer science. Beaty now lives in Chicago with her family. Learn more at Andrea Beaty’s official website.

A video interview with Julie Andrews & Emma Walton Hamilton Excerpted from The Julie Andrews Collection website. Julie Andrews is one of the most recognized and beloved figures in the entertainment industry. Her legendary career encompasses the Broadway and London stages, blockbuster Hollywood films, award-winning television shows, multiple album releases and concert tours and the world of children's publishing. A child star of the British vaudeville circuit, Ms. Andrews came to America at the age of 19 to star in The Boyfriend on Broadway. Andrews' dedication to children has been steadfast throughout her career. Andrews' considerable charitable work has been consistent throughout her career, and in 2000 the title of Dame Julie Andrews was bestowed upon her by Queen Elizabeth II for lifetime achievements in the arts and humanities.

Telling Stories with Tomie DePaola A video interview with Tomie dePaola Tomie dePaola (da POW la) is one of today's most recognized names in the world of children's literature. His charming characters and distinctive artistic style make his picture books appealing to both children and adults. He has published folktales, nursery rhymes, board books, religious books, chapter books, and more. All in all, dePaola has illustrated over 200 children's books and written stories for nearly half of them. But Tomie dePaola's popularity reaches beyond his books. A Storied Life Tomie dePaola grew up in the small town of Meriden, Connecticut in the 1930's and 40's. Throughout his successful career, Tomie dePaola has been recognized for his artistic talents. Today Tomie dePaola lives in rural New Hampshire and works from his studio in a renovated 200-year-old barn.